Foreign direct investments to Turkey, particularly after 2003, increased visibly compared to previous years. However, it is noteworthy that 25 percent of these investments consist of property purchases and sales.

Generally, all kinds of foreign resources inflows accelerated after 2003. This was a very different increase compared to the previous decades and a yearly average of $41 billion foreign inflow became the main source of economic growth. In the past two years, though, the inflow of resources has visibly fallen.

The reason why the foreign resources that did not arrive before 2003 started accelerating after this date was related to the problems of the economy that could not be overcome. After accumulating in the 1980s and 1990s, the huge public deficits that led to the 2001 crisis, the very fragile banking sector and a corresponding inflation course of 60 to 100 percent kept foreigners away from Turkey. 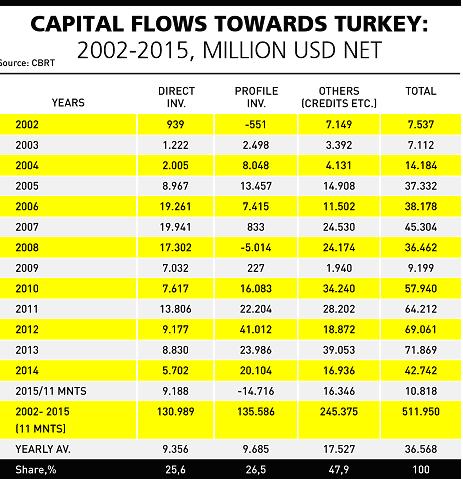 After the overcoming of these issues thanks to bitter IMF recipes, which had very severe social and political consequences, following the 2001 crisis, Turkey began to attract investments among foreigners.

This foreign resource, three-fourths of which consisted of foreign loans and portfolio investments, as debt generating capital inflow, increased Turkey’s outstanding foreign debt to 55 percent of the national income at the end of 2015, at $405 billion.

After 2002, even though there had been a perceivable change in foreign direct investments, it was noteworthy that foreign inflow increased mostly as debt-generating credits and portfolio investments.

So much so that from 2002 to the end of October 2015, only 25 percent of the $512 billion foreign resource was direct investment; the foreign resource that arrived in the form of credit and deposit topped the list at 48 percent. Foreign investments that came to the stock exchange as hot money had a volume of 27 percent. Almost half of them consisted of investments in government bonds which generate debt. 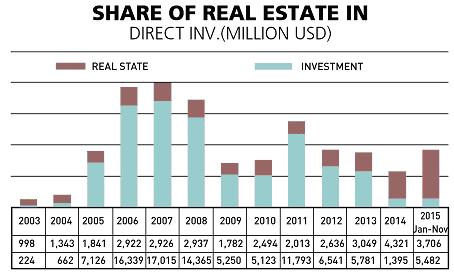 Particularly after the facilitation introduced in the regulations, property purchases by foreigners increased in 2003. These purchases were included in foreign direct capital investments as a method.

Investments in real estate, which did not reach $1 billion in 2003, increased regularly in the following years and peaked in 2014 at $4.3 billion. The annual average between 2003 and 2015 in real estate purchase can be said to be $1.7 billion. This means that between 2002 and 2015, among the total of direct investments reaching $130 billion, property sales were $33 billion.

When foreign direct investments except in real estate are analyzed, these can be said: The rush to finance the current accounts deficit was prioritized after 2003, with this concern, foreign direct capital inflows were not encouraged and managed within the framework of a certain policy. Almost with a “random” foreign capital policy, all kinds of foreigners were free to enter any sector without any guidance. As a result, foreign companies, instead of productive sectors, primarily manufacturing, trended toward service sectors such as finance, information-communications and commerce, buying whatever they wanted in privatizations.

While the foreign capital that invested in the manufacturing sector remained at a certain level as an amount, it can be seen that it commands several subsectors. In several important sectors, firms with 100 percent foreign capital dominate the sectors.

The manufacture of food products, beverages and tobacco, transport equipment, chemical products and materials, computers, electronic-electrical equipment and the dominance of foreign capital companies can be observed.

While the accelerated foreign direct investments after 2002 did not increase much in their annual averages after 2008, debt that generated foreign inflows rapidly increased. What seems to be influential in the slowdown in foreign direct investments is that foreigners saw privatizations and bank purchases attractive and after that, their appetite died.

In the services sector, foreigners who bought Türk Telekom from the Privatization Administration also invested separately in the mobile telephone sector and other subsectors of their services. Also, they bought local banks. But in the end, total foreign investments in industry lagged behind. As a matter of fact, the share of manufacturing in the total of $130 billion foreign direct investments in the period 2002-2015 remained at 23 percent; after adding the share of mining and energy, the share of industry in the wide sense increases to 38 percent. Services sector on the other hand has a share of 61.5 percent.

Investment stocks and their cumulative values of foreign capital are as important as their annual inflow. They are also explanatory in terms of the preferences of foreign firms.

The International Investment Position data disclosed by the Central Bank every month shows the total assets of foreigners in Turkey. These assets show that month’s value of the direct investments, the current value of portfolio investments in the stock exchange and their credit-deposit receivables in Turkey. This value was revealed at the end of 2014 as $665 billion. In this total, foreign direct investments take up a share of 25.8 percent. The foreign asset value in industry is nearly $78 billion and corresponds to 12 percent of all foreign investments. 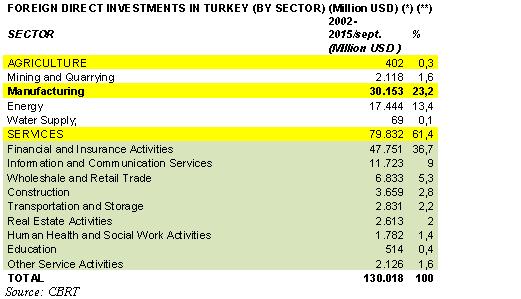 The asset value of foreign firms that have direct investments as of end of 2014 is nearing $177 billion. This total was $30 billion in 2003.

The foreign asset in industry is $78 billion, 45.2 percent of the total. At the end of 2014, $57 billion of this total was assets of foreigners in the manufacturing industry.

On the list of asset values of foreign investments, the first place belongs to the automotive industry at $13 billion. This sector is followed by the food, beverage and tobacco sector. The value of assets of foreigners, who have a considerable investment stock in this sector with the purchase of alcoholic drinks and cigarette companies from state monopoly Tekel, is again $13 billion, nearing the value of assets in the automotive sector.