Summary
President Recep Tayyip Erdogan is dusting off plans for the megaproject Canal Istanbul ahead of the constitutional referendum as an example of what a strong president could achieve.
Author Mustafa Sonmez Posted February 22, 2017
Translator Sibel Utku Bila 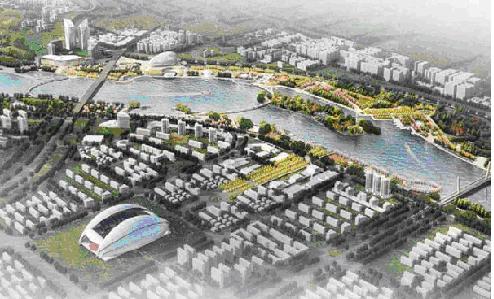 For the past six years, Turkey’s leadership has trumpeted a “crazy project” — Canal Istanbul, a man-made waterway — to ease congested traffic in the Bosporus. Announced ahead of the July 2011 elections, which handed Recep Tayyip Erdogan a third consecutive premiership, the project was touted as a major feat of engineering and a symbol of Erdogan’s “master” period in politics. The government has kept the hype alive, but Canal Istanbul is yet to transcend the realm of dreams, lacking both a feasibility study and construction plans on paper.

Canal Istanbul does not appear in official investment plans, but transport ministers have routinely referenced it in budgetary presentations in parliament, complete with illustrations of Ankara’s vision of it. Most recently, it was listed among the infrastructure projects that the government plans to finance through the newly created and highly controversial sovereign wealth fund. Although the project remains a dream at present, mere talk of it has already sparked a flurry of land selling and buying in areas north of Istanbul.

The hype is being ratcheted up in the run-up to the April 16 referendum on constitutional changes to install the presidential regime of Erdogan’s dreams. Erdogan is expected to actively campaign for the amendments, and in a hint of how he plans to justify his quest for extraordinary powers, he said he needs them to realize big investments — like the Canal Istanbul project.

The idea of development, investment and big projects has always been exciting to Turks. In the 1930s, when modern Turkey was still a fledgling republic, its founders galvanized the nation with a state-sponsored development drive that served as a strong social adhesive during the nation-building process. Such infrastructure investments remained popular under the center-right Democratic Party and its successor, the Justice Party, which ruled Turkey during much of the 1950s, 1960s and 1970s. Highways, dams, power plants and communication infrastructures, built mostly with World Bank loans, translated into election victories for the two parties. While the center-left Republican People’s Party championed the social state and social justice, the center-right stuck with a development and investment theme. Turgut Ozal, who served both as prime minister and president in the 1980s and 1990s, sustained this legacy while taking credit as the man who cleared the way for Turkey’s integration into the global capitalist economy.

Erdogan’s Justice and Development Party (AKP), which came to power in 2002 as the offshoot of an Islamist party, embraced the development-investment narrative as it sought to lure the base of the fractured and ailing center-right. Domestic economic conditions and the abundance of global liquidity proved auspicious, and the AKP’s ambitions came to fruition. By 2007, economic growth had reached 7% before shooting to an average of 10% in 2010 and 2011. As a result, the AKP’s popular support rose to almost 50% in the 2011 elections, up from 34% in 2002.

Canal Istanbul was one among a series of “megaprojects” that formed the backbone of the AKP’s election platform in 2011. Months before the official announcement, the media stoked public curiosity with reports that Ankara was drawing up a “crazy project,” a label that has stuck to date.

Yet the idea for a man-made waterway in Istanbul was not new. The annals of history trace the concept back to Ottoman and even Byzantine times. It began generating serious debate in the 1990s, as Istanbul grew and flourished. In 1996, for instance, the economist Nezih Neyzi wrote about building a “canal from the Golden Horn to the Black Sea” in a magazine published by the History Foundation. In 1999, the project appeared in the election platform of Prime Minister Bulent Ecevit, who happened to be Neyzi’s high school friend.

What does the AKP’s project entail? According to media reports, the canal would be built on the European side of Istanbul with the primary objective of relieving the tanker-clogged Bosporus, the only waterway connecting the Black Sea and the Mediterranean. Canal Istanbul would link the Black Sea to the Sea of Marmara as an alternative route to the Mediterranean. It would reportedly be 40-45 kilometers (25-28 miles) long, 25 meters (27 yards) deep, and 150 meters (164 yards) wide on the surface and 125 meters (137 yards) at the base. Once the waterway is completed, the Bosporus would be closed to tanker traffic, which has often caused deadly accidents in the narrow strait bisecting Istanbul. The project also includes the construction of two new cities at the canal’s southern end, an artificial island and two peninsulas.

As for the canal’s location, one hint has been dropped by Erdogan, who once described the project as a “gift” to the district of Catalca. Other sources suggest an area between the Terkos and Buyukcekmece lakes, while another rumored location is between the Silivri shore and the Black Sea. Such suggestions have reportedly sparked massive land speculation in these areas.

The cost of the project is another issue of wild speculation. Some have put it at $10 billion, others at $20 billion. The plan for a third airport in Istanbul, the biggest megaproject tendered so far, has a contract value of nearly $14 billion. Since the groundbreaking in June 2014, only 10% of the project has been completed, with progress slowed by financing snags. The government is now pinning its hopes on the sovereign wealth fund to speed up construction. Given this state of affairs, the financing of Canal Istanbul is a mystery.

Another unanswered question is who will build the canal? Will it be constructed as a public investment or under the build-operate-transfer model, whereby a local-foreign partnership assumes financing and construction? One hint came in November from Ergun Turan, head of TOKI, the government’s housing agency. “We’ll secure the financing through revenue sharing, land sales or building sales. The Transport Ministry will use this financing to carry out the construction of the canal,” Turan said. The TOKI chairman’s remarks suggest that Canal Istanbul is a dream not only about a waterway, but also about massive, rent-oriented urban construction in its vicinity.

The potential environmental impact of the project is the least discussed issue in the media, even though experts and activists warn of alarming consequences, including disastrous impacts on Istanbul’s water resources, marine habitat and agricultural lands and forests.