Construction became a rising sector during the AKP’s rule and after the 2001 economic crisis. As the government paved the way for using public lands for construction, building permits surged

Construction became the sector that left its mark during the Justice and Development (AKP) regime and this happened after the 2001 crisis. The steep interest rate climate that large capital owners lending to the government benefited from amid the heavy transaction implemented in 2001 and 2002 with the help of the International Monetary Fund (IMF) ended as well.

What happened after 2002? The era of saving over construction began in domestic consumption too. The banks, which used to lend to the state before 2001, would turn their faces to consumer loans. The mortgage campaigns would speed up. When The AKP rule attached the Building Land Office, which controls the public lands, to the Housing Development Administration of Turkey (TOKİ), which is directly under the authority of Prime Minister, the enrichment era began in the construction sector. With the TOKİ model, which uses public lands as a kind of capital without spending from the budget, more than 500,000 houses have been constructed in the last 10 years via TOKİ. Small contractors, known as AKP partisans, big industrialists from the past and also financers started to feed from the construction sector.

As three quarters of the permits are for houses or habitation, one quarter is for office, hotels, public construction… etc.

The “construction” may not have a determinant size regarding its share in the national income, but it is an activity that brings the other sectors along with itself. When the construction begins, all the construction material – cement, glass, ceramic, brick, color, iron-steel, wood – producer sectors start to take their places. The banks’ credits start to get involved. It is an opportunity for international funds. After finishing the construction of the buildings, its interior equipments pave the way for white goods and the automotive industry. The marketing of houses paves the way for the real estate agents and also the press with ads. It affects many sectors in such an enchainment. However, the main character of these activities is that the house, as merchandise, is a production directed to “domestic market” and its exports – its buyers abroad who pay with foreign exchange – stay limited.

The sector’s, which is dependent on domestic demand, exports reach $3 billion at most, insufficient.

The signs of falling domestic demand are no good for the construction sector, specifically when many prestigious construction projects in Istanbul have such high price tags. 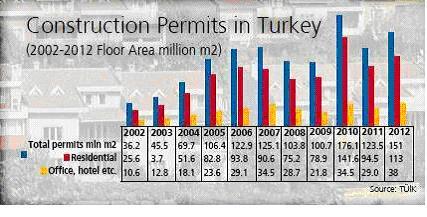 Moreover, the outflow of foreign money from Turkey amid the latest decision of the U.S. Federal Reserve (FED) to end the liquidity party and the Gezi protests across Turkey is not good for Turkish economy. Domestic demand has been falling while the dollar is being valued. The construction sector is highly vulnerable to such negative developments. If people start to use less housing loans, the sale of houses will decrease. If then the prices of houses plummet, we can say the sector will see worse days. An increasing exchange rate is not good news for the construction sector players who used foreign loans. They need to overcome such issues unfortunately.

Some 20 percent of all the construction permits issued for Turkey were given to projects in Istanbul, according to figures.

In Turkey, where 70 percent of the population is urbanized and housing needs are on the rise, people have been encouraged to buy houses on bank credits, leading many to see the purchase of dwellings as an investment tool.

Rapid urbanization has increased the need for more investment in urban infrastructure.

Following Istanbul in the distribution of construction permits is Ankara, at 13 percent and the Aegean province of İzmir, at 4 percent.