Need for social service and aids are continuing as poverty rates in Turkey are still over European Union average. The rate of social aid spending, mainly managed by the Family and Social Policies Ministry, to GDP has not surpassed 1.2 percent which indicates there is a lot to do for the government

Ramadan, “sultan” of the Muslim world and religious bayrams coming after has always been a time when poverty and social cooperation are remembered more. In a country such as Turkey, where income inequality is at mind-blowing levels, only remembering impoverished ones is not enough, of course. How far Turkey has progressed in diminishing income inequalities, which should be a mission of a social state? Are the public interventions that would shrink inequalities implemented enough? Is the state up to take on Robin Hood’s task? How much?

It looks like the inequality in income has been lowered with the help of foreign source-driven growth in recent years. The coefficient for inequality, the Gini ratio, seems to have dropped to 0.38 in 2011 from the 0.42 of 10 years ago.

It is possible that the annual 5 percent growth and rising employment, accordingly the increased number of people bringing money home, might have reduced the yawning gap. Still, the accountability of the table that shows income distribution among five layers of the population is questionable always, because these surveys are always formed based on the declarations of the respondents. How possible is it for lower-income people to hide their wealth? But what about wealthier ones? Can we expect them to declare all of their income to the surveyor?

Although its Gini ratio appears to have lowered to 0.38, Turkey is one of the countries with highest income inequality among the Organisation of Economic Co-operation and Development (OECD) countries. It’s not possible to talk about justice when the wealthiest 20 percent gets the 45 percent of the overall income and the poorest 20 percent has to settle for 6.5 percent.

Inequal apportionment of income of course means the poverty of the one at the bottom and importance of state’s poverty battle duty is growing every day. 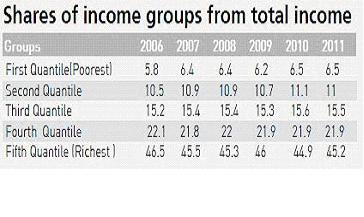 Who are the poor?

Poverty is especially widespread among the ones with lower education levels, casual employees, non-paid family workers, agricultural laborers and wide families. Education level is one of the key indicators explaining the poverty. In 2009, while the poverty rate among illiterates or those who never graduated from a school was 29.8 percent, the same rate was 0.7 percent for the ones graduated from university or higher schools.

Although schooling rates in education have been rising for years, the schooling rate for girls is also still behind boys, which is one the components causing women to face more risks of poverty.

The poverty exposure possibilities are higher for those living in rural areas compared those in urban areas. The poverty rate in rural areas was 38.7 percent in 2009. The fall in poverty rates between 2003 and 2009 was mainly sourced by the drop in urban poverty. Despite unemployment in rural areas being behind the overall unemployment level, poverty is higher in those regions due to the fact that most of the employment is in agriculture, in which the added value per person is low. This was why the share of the agriculture sector in the GDP was 9 percent even though it accounted for 25.5 percent of overall employment in 2011. Poverty among agricultural laborers was 15 percent higher than the overall poverty level with 33 percent.

Nine points despite the social interventions reveals the fact that these programs are not effective enough.

The need for social services and aids continue because of reasons like immigration, urbanization, changes in family structure, population rise and unemployment. Public social aid spending done by institutions such as the Family and Social Policies Ministry, Health Ministry, National Educational Ministry, Social Security Institution (SGK), Higher Education Dormitories Institution (YURTKUR) and municipalities in this perspective has not been over 1.2 percent of GDP. 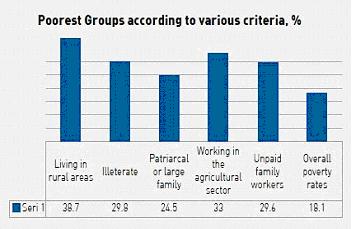 Justice and Development Party (AKP) rule made the Family and Social Policies Ministry into the ministry responsible for social aids with a series of regulations and authority and responsibility transfer. The Social Aids Directorate (SYGM) has turned into the most authorized institution with a 60 percent share. The SYGM carries out its activities thorough 973 Social Aid and Cooperation Foundations present in all provinces and districts countrywide.

While 42 percent of the 18 billion-lira fund was spent for education aid, 12 percent of it was allocated to family help, which comprises food, fuel and sheltering assistance.

The quantity of social aids appears to rise when the budget opportunities provided by the 5 percent average annual growth is taken into consideration, but it is still behind the needs of Turkish society.

More capital should be transferred to social spending from the budget. The rate of social aid within the GDP, which is around 1 percent now, could be elevated by at least 1 percentage point to 2 percent.

However, management and usage of social aid are as important as their quantity. The management of Social Aid Funds still has a centralized structure despite some of the changes made. The Fund Boards, the decision-making body of these institutions, is directly bound by execution in Ankara; even more its decisions are directly bound by the prime minister. So, aid programs are commonly criticized for being used to create thankfulness among indigents to get more votes.

Social aid programs should be transformed to local from central. Resources provided from the central budget and funds’ own revenues should be managed by the fund system of each province and district and funds’ boards should be made up more of local actors. This local social aid authority should be in charge of deciding in which fields fund sources should be used, how much and according which criteria. Implementation and audition of the results should be also under its authority.