Expectation surveys that measure the confidence of the real sector and consumers regarding the economic policies applied and their expectations related to the future are good way to feel the pulse of both the companies and the consumers, as well as help interpret expectations.

The December 2014 survey results have shown that confidence is decreasing in the economy policies and their results as implemented by the ruling Justice and Development Party (AKP). Especially since mid-2013, when the U.S. announced that it would start a new monetary climate, it is being observed that expectations – even though they show some increases from time to time – are trending downward.

The Central Bank’s survey results on “expectations” revealed that expectations made in 2013 for the upcoming year had not come to pass by the end of 2014.

Expectation surveys are conducted by the Central Bank each month to monitor the expectations related to various macroeconomic variables of decision-making and experts in the financial and real sector. The questions in the survey cover short and long-term expectations about basic macroeconomic variables, such as consumer inflation, exchange rate, current account balance, growth rate of gross domestic product and interest rates. The panel of participants is chosen among decision-makers, experts and professionals in the financial and real sectors, and also among experts in foreign financial institutions. Participation is on a voluntary basis.

Those who participated in the Central Bank’s expectation survey conducted in December 2013 estimated that the dollar exchange rate would be 2.1 Turkish Liras at the end of 2014. However, estimates failed and the expected dollar exchange rate did not happen. The dollar exchange rate, especially under the effect of the rising political risk when the AKP and the Gülen Community clashed and during the Dec. 17 and 25 corruption operations, rapidly climbed. Toward the end of January 2014, the dollar peaked at 2.40 liras. Despite being curbed by interest rate increases, nevertheless, the dollar was mostly high during 2014 and toward the end of the year, with the effect of FED decisions and the political climate, the dollar again saw 2.41 liras at mid-December before dropping to finish the year at around 2.32 liras.

The inflation performance in 2014 was also above expectations. The participants in the Central Bank survey expected 6.7 percent inflation. However, especially with the resistance of food inflation, consumer inflation reached a peak of 9.2 percent annually in the month of November. As a result of the shrinkage in agriculture and its reflection on food prices, also high prices in restaurants and hotels that are affected by food prices, even though the consumer inflation was revised twice, the expectations did not come true and the consumer price index exceeded 9 percent.  Those who participated in the Central Bank’s 2015 survey have publicized their 2015 expectations. Those who responded to the Central Bank’s December 2014 survey expressed that their growth expectation for 2015 was 3.5 percent. In association with this, the current account deficit at the end of the year is predicted to be $44.7 billion.

Those participating in the survey also agree on a dollar exchange rate of 2.41 liras and an annual inflation rate of 7.2 percent.

The results of the consumer trend survey, on the other hand, conducted in cooperation between the Turkish Statistical Institute (TÜİK) and the Central Bank reveals that there is a decline in consumer confidence. The Consumer Confidence Index has fallen 1.3 percent to become 67.7 in December 2014, when compared to November of the same year. Thus the confidence index has fallen 11 points from June 2013, when the world monetary climate started to change and also affect Turkey until the end of 2014. 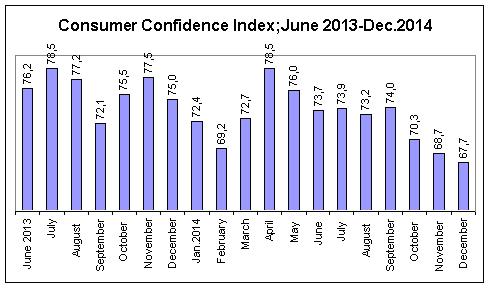 Consumers are not positive about purchasing durable goods, automobiles, homes or the possibility to loan for them, and they have all answered the questions negatively, saying that circumstances were becoming tougher.

The Real Sector Confidence Index, which is the survey conducted by the Central Bank among top executives of those businesses that direct the country’s economy, operating in the manufacturing industry, is also trending downward. The confidence index of the real sector decreased 1.5 points in December 2014 compared to the previous month to become 101.2. This figure is the lowest in the last two years. The fall in the index reached 8 points as of June 2013. 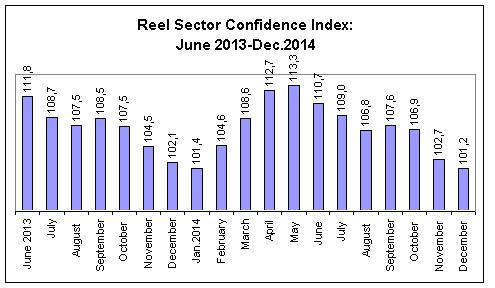 It is expected that the downward trend and the fall of confidence in companies by consumers will also continue in 2015. It looks as if these, especially with the news of the expected increase in interest rates in the U.S. will prompt the withdrawal of foreign investors from Turkey, pulling down growth. The fact that 2015 is a general election year for Turkey means that the existing political risk will continue, at least until mid-year.

The geopolitical risks in the region, the fact that a solution has not been reached in the Kurdish issue and the deepening crisis in Russia  will be added to the economic and political risks of the country.