Turkey is holding its breath for more foreign capital inflow but the characteristics of previous inflows hint future ones may come as state-enterprise acquisitions, rather than new investments

Every kind of foreign source inflow to Turkey, which was $34 billion in the 1981-2002 period, reached $400 billion over the last decade but the state enterprise purchases accounts for most of them. REUTERS photo

Recently, one of the most important topics on Turkey’s agenda has been the receiving of “investible notes” from credit rating agencies. It is highly expected that capital inflows and portfolio investments will now increase. So far, no foreign investor has come to Turkey without giving such a note. But to what extent, and to which sectors is the investment flowing? Evidently, there is dissatisfaction both in the quantity and in the quality of the inflowing foreign direct capital. Let’s take a look at where foreign investors mostly choose among the countries similar to Turkey.

Countries with insufficient savings and trying to attract foreign sources primarily want direct foreign investors. They want them to take risks, make investments, create employment, pay taxes, bring in skills to the labor force and sub-industries, introduce new technologies, use domestic raw materials, and contribute to regional progress. So, everyone is in search of a foreign direct investors, especially those who will make new (green) investments. However, a foreign direct capital investor does not compliment all geographies to the same extent. Each multinational or global firm prefers investing in the countries that are the most suitable in the sectors in which they operate.

The Organization for Economic Cooperation and Development (OECD) announced that about $6 billion in direct investment was made to 33 developed countries during the 2004-2010 period. Money begets money, and a major portion of this foreign direct capital ($3.5 billion) is invested in developed countries such as the U.S., Germany, Britain, Belgium, France and Canada. In this period, it is observed that 17 OECD countries in Asia, South America, and Southern and Eastern Europe, including Turkey, have received a total investment share of $2.5 billion, corresponding to 40 percent of the total.

More than 60 percent of this $2.5 billion was mostly invested in the rising power BRIC countries. Among them, China has the lion’s share. China, as a rising power, received about 37 percent of foreign investment in the 2004-2010 period. Russia came in second place with a share about 11 percent, and Brazil and India followed them with 8 percent and 6.4 percent of foreign investments, respectively.
What about Turkey? In the 2004-2010 period, Turkey attracted a total of $92 billion of direct capital investment, receiving a 3.6 percent share of the cake in the league of rising powers. This is not a bad share, but the devil hides in the details 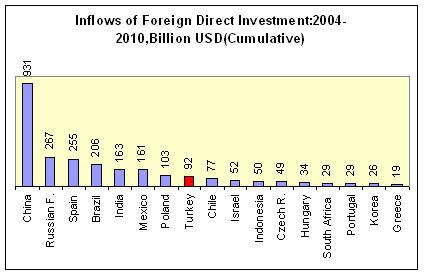 Every kind of foreign source inflow to Turkey, which was $34 billion in the 1981-2002 period, reached an incredible number over the last decade: $400 billion. Foreign sources are categorized into two. The first category, which has a share of about 70 percent, is the inflow of “foreign sources creating debts,” while the other one is direct investment. The foreign sources are about $122 billion, which is “direct foreign capital.” In the 2003-2012 period, annual inflow exceeded $12 billion. However, it is evident that foreigners are not very attracted by new investment, which is the cause of all these complaints.

The data show that 18 percent of foreign direct capital aims to purchase real estate. The biggest share of foreign investment was made in the finance sector with 32 percent; in particular, European banks purchased banks from domestic investors, especially from 2005. It seems that foreign capital, which apparently follows the financial sector, has led to an industry making up 26 percent.

However, it is known that the foreigners came here in order to purchase privatized state economic enterprises, rather than new investments in this branch. Monopoly businesses and the Petkim refinery are among the most outstanding state economic enterprises purchased by foreigners during privatization processes. So, instead of making new (green) investment in industry, they chose to purchase the already present ones.

The third area of interest of foreign capital over the last decade has been the service sector, with a 24 percent share. Along with the purchases of Petrol Ofis and Migros, the privatization of Türk Telekom had an important place in this branch. Other popular service sector branches include mobile phone sector, private hospitals, investments in shopping malls, and electricity distribution. 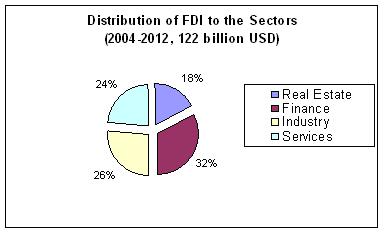 We could say that foreign direct capital heading to our country over the last decade actually intended to have a share of the opportunities in profit-seeking, interests, and privatization, influenced by the general atmosphere in the country. It is clear that this is not new investment in new industries and services that could bring foreign exchange, create employment, increase taxes, and advanced technologies, which Turkey actually needs. But could this be achieved in the future? Above all, for this to happen the investment atmosphere of the country should undergo a change. As profit-seeking in Istanbul and the routines of interest and domestic markets continue, why would foreigners engage in sectors different from those already made by locals? This is why they currently only come here to invest in these sectors.