Corruption operations that topped Turkey’s agenda and caused ministers’ resignations are continuing with focus on gold.
The operations, encompassing three different investigations, including land planning frauds, the exploitation of public assets and else, but for now the most striking allegations that horrified the public are the ones including “gold,” briberies paid over it and minister’s sons accused of receiving those briberies…

Gold has become the main subject of “money laundering” claims since recognizing Turkey’s bullion gold trade’s boom since 2011. Turkey exported $1.5-billion worth of gold, while importing $6.2-billion gold in 2011, but the export explosion came in 2012 and reached $13.3 billion in one year. The country’s import was $7.6 billion that year. In 2013, import came to the forefront again and reached $13 billion. What was happening, why did gold trade burst?

Turkey could not pay for the natural gas it buys from Iran in foreign exchange due to U.S. sanctions on banks. So, how could it return the money? A way to bypass sanctions was found: Iran was going to be paid in Turkish Liras and then the country would use those liras to buy gold in Turkey, which would look like Turkey is exporting gold to Iran. Since there are not billions of dollars’ worth of gold bullion in Turkey, it needed to be imported from Switzerland. An intermediate station was also found to avoid the U.S.’ rage and that was the United Arab Emirates (UAE). A part of the gold looked like it was exported from Turkey to the UAE and was transferred to Iran’s accounts. In the same way, gold was imported from the UAE. 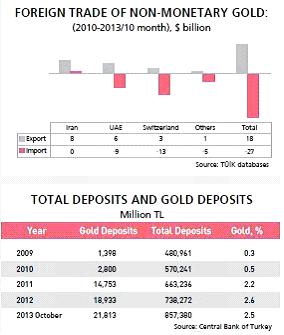 Overall, Turkey’s gold exports within the past four years, between 2010 and 2013, have amounted to $27 billion and

its imports have appeared to be $18 billion. Some $8 billion of the exports seem to be exported to Iran, while exports to the UAE also constitutes $6 billion, which can also be regarded as going to Iran.
Therefore, $15 billion of

Iranian natural gas was paid for in this way. Most of this gold was procured by Switzerland, while a small part has been brought by Dubai.

Many argued this payment system’s being recorded as “export,” caused export figures to falsely rise; the country’s current account deficit looks smaller than it actually is and national income is exaggerated. Moreover, some analysts also warned the transfer method may cause headaches for Halkbank and others involved in the scheme.

I dealt with this subject in about 10 of my columns in 2012. The Republican People’s Party (CHP) Istanbul deputy Umut Oran filed a parliamentary question in July 2012 referring to my column to ask Deputy Prime Minister Ali Babacan about the issue.

Babacan sought to clear the issue on November 2012 with this answer; “We put the money for Iranian gas into Iran’s bank account in Turkey in liras. However, it is impossible for Iran to bring that money to its country in the dollar because of international restrictions and U.S. sanctions. Therefore, Iran withdraws that money from its account and buys gold from the market to bring it back. I don’t how it does so, but this is how it works.”

The claims are saying Reza Zarrab and his team were one of the mediators that used to do what Babacan said he didn’t know and they were earning a great amount of money.

According to claims, Zarrab needed some convenience support in the transaction of transferring the gold bullion with planes and couriers. Mediator bank Halkbank’s General Manager Süleymen Arslan, Economy Minister Zafer Çağlayan and his son, Interior Minister Muammer Güler and his son and EU Minister Egemen Bağış are claimed to be the ones helping him with citizenship, residence and business permits in return for bribery.

The Turkish banks’ gold deposit practices, which are presented with an innocent reason of inclusion of under-the-pillow gold into market through economy management, have also been regarded as being a part of these money laundering claims.

It was said there were approximately 5,000 tons of gold with a value of $300 billion under pillows and they were aimed to be drawn to recoded finance.

Banks were allowed to keep 30 percent of the reserves they have to allocate for the Central Bank in gold, which was alluring for them. 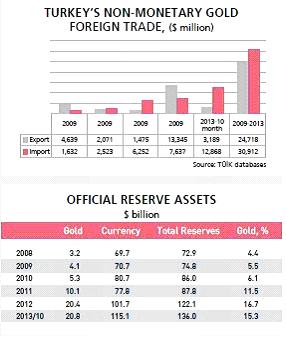 However, the risk of this gold to be brought by citizens to be used for money laundering wasn’t taken care of much and banks kicked-off the gold rush.

The Total value of gold deposits was almost 2 billion liras in 2010 reached 21.8 billion liras by of the end of October. This means more than a 990 percent increase! Three years ago, only 0.3 percent of the bank deposits were in gold, but in October the ratio was 2.5 percent.

Not only ordinary people, many companies engaged in the gold business and foreign investors are among the banks’ gold deposit customers. Gold accounts are usually non-interest accounts. The gold owner opens an account and the bank sends the gold jewelry to a refinery to transform it into gold bars, which can be withdrawn by the customer if they want. The refining cost is paid by the banks, but it earns commission. What is the Central Bank’s benefit here? This way, its reserves swell so $21 billion of foreign exchange reserves that looked like $135 billion in November was gold at hand. Many international money launderers, like Zarrab, are claimed to be using these gold deposit accounts. Some mind-blowing numbers, like 85 billion euros, are voiced for the amount of laundered money and banks other than Halkbank are accused of being involved as well.

The Financial Action Task Force (FATF) describes Turkey as one of the countries that have flaws in its fight against Money Laundering Legislation, along with Indonesia, Pakistan, Syria, Yemen Ethiopia, Ecuador and Nigeria.

Is it possible the government’s attempts to control the probe through changing investigation officials and regulation amendments to push Turkey from the gray zone to the black zone on the OECD level? Would Turkish banks face international blockage? It was clear that such a measure would create a great hole in a Turkish economy that is dependent on foreign capital inflow. Claims of Turkey’s financing and supporting al-Qaida-like organizations in Syria could be added and the Justice and Development (AKP) leadership could face serious accusations. It wasn’t coincidence the U.S. Treasury Undersecretary David Cohen met with banks in Istanbul and discuss Halkbank.