The growth data of 2014 released on the last day of March and preliminary indicators released for the first three months of 2015 show that there is a serious slowing trend in the manufacturing industry, which is considered the backbone of the economy. When industry slows down, the service sector also loses speed, starting with commerce and finance. The reason why the manufacturing industry is sounding the alarm has to be analyzed carefully and where it lies has to be found to accelerate growth again.

In the period between 2003 and 2007, Turkey’s economy was growing at an average of 7 percent annually and the manufacturing industry was living its best years, it too growing at the same rate. However, with the global crises that came later it shrank in 2008 and 2009. In 2010 and 2011 it grew at an average of 12 percent, then came the recession years. Growth in the manufacturing industry went down to 1.7 percent in 2012 and stayed at 3.7 percent in the following two years.

Based on domestic demand

The reason the economy in general and industry in particular and its backbone the manufacturing industry have come to a bottleneck is because it has been designed for domestic demand and the exportation leg of it has been neglected.

Source: TÜİK
When the growth rates are analyzed for the 2003-2014 period of the Justice and Development Party (AKP) governments, the average annual growth rate was 4.8 percent, with 3.3 points of this coming from household consumer spending while 1.6 points were investments and 0.7 points came from public spending. Foreign trade on the other hand did not have any positive contribution to growth in this period; it even pulled it down half-a-point.

When growth rates in the manufacturing industry and household consumer spending rates are compared, it can be observed that there is a major overlap.
The average growth rate of the period between 1999 and 2014 for 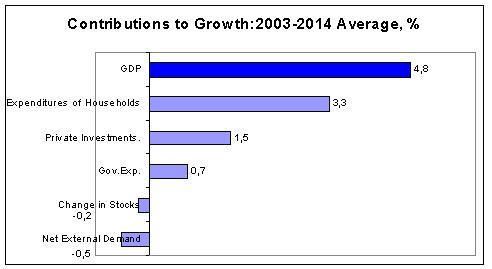 In the acceleration of household expenditures, which carries wind to the manufacturing industry, consumer loans and credit card payments, in other words personal loans, have a principal place. With the rise in 2003 of external capital inflow which corresponded to an annual average of $40 billion, credit volume banks provided for the consumer and commerce segments, to small and medium-sized enterprises (SMEs), rapidly increased.  The credit volume which was 102 billion liras in current prices in 2004 reached 1.257 trillion liras in 2014, a rise of 1132 percent. In the same period the increase in the consumer price index (CPI) was 142 percent, telling us that the credit volume had increased extraordinarily.

Out of the 102 billion liras in loans the banking sector provided in 2004, 26 billion liras were personal loans. In other words, they were the consumer loans on vehicle, house and personal finance credits as well as other loans over credit cards. This amount kept its share in following years among total loans and as the average of the period of 2004-2014, the share of personal loans in total loans reached 31 percent.

With the effect of the interest rate rises in 2014, personal loan usage declined. The total amount of personal loan stock of 354 billion liras constituted 28 percent of total loans. In 2014, it can be seen that personal loan usage increased 7.2 percent in current prices but stayed 1 point behind CPI, showing a real decline. A withdrawal was observed, especially in vehicle and credit card loans.

Credit card debtors started preferring consumer loans because their interest rate was lower, but as a whole, personal loan usage declined. This lowered household consumption; the decreased demand created a slowing effect on the wheels of the manufacturing industry.

While growth in 2014, and as a sub-branch of it, the growth in general industry and the manufacturing industry, was lower than the target, there also has not been a good start for 2015. Data released for the first quarter of 2015 points to zero or below zero growth. The main indicators that strengthened this estimate are the following:

The Industry Production Index declined for the first time in the past four years in January. In January, seasonally and calendar-adjusted industry production fell 1.4 percent compared to the previous month. Production on a monthly basis fell 7.4 percent in mining and 1.4 percent in manufacturing.

One other negative indicator is about turnovers. In January, the Industrial Turnover Index seasonally-adjusted lost almost 5 percent compared to December 2014. The capacity usage rate in the manufacturing industry, on the other hand, went down 0.4 points compared to the previous month and 0.7 points compared to March 2014, falling to 72.4 percent. From all this data, it can be understood that industry is losing power and does not give much hope in terms of growth in the first quarter of 2015.

There was no change in the external demand to compensate for the shrinkage in domestic demand. While exportation fell 3.4 percent in the first two months of 2015, imports also, with the effect of decreased investments and production, fell 10.6 percent. The Turkish Exporters Assembly (TİM) announced that the fall in exports in March was 13.34 percent. Also, this data increases the possibility that the growth data to be released by Turkish Statistical Institute (TÜİK) on June 10 will show a negative figure.

First quarter data confirms that the year 2015 will also be a tough year in the global economy. In 2014, China’s growth rate was 7.4 percent, the lowest in 25 years. A recovery in the eurozone economies is hoped to arrive with the monetary expansion program.

The foreign resource inflow, which decreased at a rate of one-third in 2014, continued to decrease in the first quarter of 2015. This pushed the dollar exchange rate upward as well as postponed a climate suitable for investments and interest rate cuts. It also caused rises in costs and increased prices.

The fact that 2015 is a general election year has made several domestic and international investors go into “wait and see” mode. The AKP government not being able to find a solution to the stagnation of the past three years has triggered the argument that “A new story for growth is needed,” but this expectation has not been reciprocated yet.

If in the short term, with a recovery in low and medium income segments’ incomes, an increase in demand is created then an extreme shrinking of the economy can be prevented. This requires that a portion of the budget expenditures be used to increase the salaries of civil servants and the retired so that household spending increases. This is possible by lowering defense-security and bureaucracy expenditures and with more justice in taxation.

However, instead of this method, the government seems to have chosen populist measures, such as to using the Unemployment Fund resources which have reached 85 billion liras, to influence voter preferences. This is both wasting the fund and wasting time on policies that have no contribution to growth. These kind of voter-focused policies do not solve the problem; they just inflate the bill that is to be sent to society in the future.