While Istanbul has seen the lion’s share of migration over the past five years with 35 percent, this proportion rises to 72 percent when the neighboring Marmara provinces are also included. Meanwhile, Mediterranean and Aegean cities’ lure for migration dims and Kurdish cities lead the emigration rates

Turkey is a country of constant migration and pursuit…Almost 2.5 million people change their address every year. From somewhere to other… Because of various reasons… Not only in income inequality has Turkey shared the top with Chile, in the regional gap as well.

Mostly the reason behind the migrations are finding a job or making a living so the population agglomerates in the west, particularly in Istanbul and its neighboring provinces, where growth is based. Three of four Turkish cities send migrants who settle down in the other quarter. People in 60 cities lose their grip and cannot survive in their hometowns… 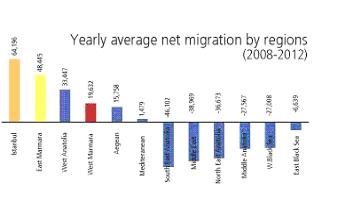 Between 2008 and 2012, almost 83 percent of net migration flew to seven centers, according to a population registry system based on address from the Turkish Statistical Institute (TÜİK). The regional gap in Turkey, however, doesn’t change. The Justice and Development Party (AKP) regime couldn’t develop policies that could narrow this gap, despite the $400 billion foreign resources that entered into the country. The past year’s growth was based on rent and the domestic market, so consuming foreign currencies and capital, and particularly on construction, rather than being currency-saving, employment-creating and production-focused. And this was condensed in Istanbul and around it as well. As a route that could fill sectorial and regional gaps wasn’t pursued, Istanbul remained as a construction and consumption weighted megacity and net migration remained focused on Istanbul. Out of every 100 migrants who moved between 2008 and 2012, 35 went to Istanbul.

While Istanbul attracted an annual average of 64,000 migration between 2008 and 2012, the east Marmara region that encompasses its neighbors Bursa and Kocaeli followed it with 48,000 in annual migration.

Istanbul’s population jumped by 9 percent in the past five years and 30 percent of Istanbul’s 1.157 million population rise was accounted for by immigrants. 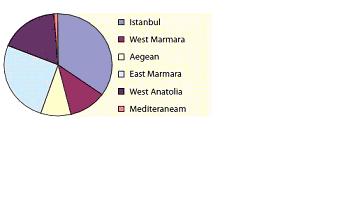 While Istanbul has received the lion’s share of migration over the past five years with 35 percent, the east Marmara region became the second most important migration center with 26 percent. West Marmara, containing the Thracian provinces as well as Balıkesir and Çanakkale, which are still within Istanbul’s attraction field, received an 11 percent share from migration. Therefore, the total share of Istanbul and the two neighboring regions were accounted for 72 percent of net migration.

The western Anatolia region, which includes here the Turkish capital Ankara and its neighbor Konya, has become the second region hosting the most immigrants after Istanbul and neighboring cities for the last five years with an 18 percent share. The coastline cities in the Aegean and Mediterranean regions, however, have lagged behind in attracting people. While the Aegean region, where the city of İzmir is located, had taken only 9 percent of all immigrants for the last five years, the Mediterranean regions, where touristic Antalya, Adana and Mersin are located, had taken not more than 1 percent.

Surprisingly there appeared to be an outflow of immigrants from Adana and its neighboring area both in 2011 and 2012. It is not difficult to guess that this immigrant group was composed of the Kurdish people who had once emigrated from southeastern Anatolia to Çukurova, the agricultural center of Adana, but could not earn a living there, now seeking a new place to move to. 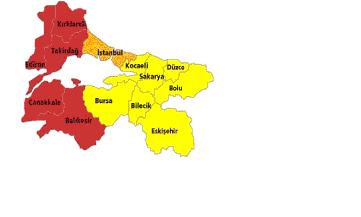 The map shows Istanbul and its two neighboring
regions, west and east Marmara, which have
received 72 percent of migration in the last 5 years.

It’s again not so difficult to predict that it is southeastern Anatolia which sends the most emigrants elsewhere. The net number of people who had emigrated from the region is around 46,000 for the last five years. They did this as they could not make a living there, which isn’t secure, facing violence.

Northeastern Anatolia had followed the region in sending the most people elsewhere. For the last five years, around 67,000 people had moved from the northeastern Anatolian province of Van, which suffered from a big earthquake in 2011. Although some of these 49,000 people returned to Van again, the province has lost most of its population. Migration has also been a fact of daily lives in many other eastern Anatolian provinces, where livestock breeding, the main economic activity of the region, has stood back for years.

The concept of migration and the accompanying words are generally associated with the eastern and southeastern Anatolian provinces. The Central Anatolian, Black Sea, and Mediterranean provinces, however, suffer from various neo-liberal policies of the Erdoğan government. The more the agricultural production, livestock breeding and industrial production decline in these provinces, the more unemployment is on the rise. When the AKP, which already weakens the social state, fails to find proper solutions for problems, the migration speeds up. Repressing migration is a problem of all cities as much as of Kurdish provinces. Whatever makes Istanbul attractive should be deterred and policies that satisfy the expectations should be pursued in large migration-producing cities. This means there is a need for a serious paradigm switch that sincerely acknowledges regional imbalance as a problem