With the first half of the year behind us, the climate for the Turkish economy is totally different from the first half of last year. While the economy was getting its boost from the domestic market last year, this year it tightly and anxiously clung to foreign market. The reason behind this worry is the uncertainty over sustainability, as drifting to foreign markets came as an obligation and a desperately taken decision, rather than as a choice.

The biggest difference between the first halves of this year and last year is the change in the relations with the outside world, as foreign conjecture – as well as domestic political tensions – is affecting foreign investor behavior and being shown in foreign currency prices. 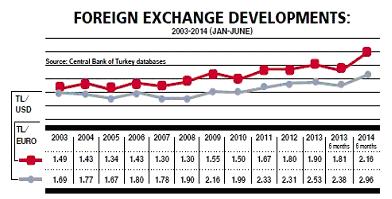 The six-month average of the Turkish Lira equivalent of the U.S. dollar was 1.81 liras in the first half of 2013. The same average for the first six months of 2014 was 2.16 – an almost 20 percent change in value. The difference is even higher in the euro, at 24 percent. This remarkably high value loss of the lira against other currencies is, of course, having a toll on companies.

The extent of the lira’s value loss could have been even higher, but the Turkish Central Bank managed to put the brakes on the sharp downfall with a surprising interest rate raise. However, caught between the two fires of considerably increased currency rates and high interest rates, the economy is still under pressure.

The new currency rate levels in the country make their presence felt in the form of slackness in the domestic market. A remarkable decline in demand is visible, particularly in the house, automotive and white goods markets, and business owners operating in these sectors have begun to cry out over the mounting restraints.

Meanwhile, Prime Minister Erdoğan constantly calls on the Central Bank to reduce interest rates in order to relieve the problems of the domestic actors, but without taking its economic costs into account.

The Central Bank recently reduced its overnight lending rate to 8.75 percent, after raising it by 5.5 points to 10 percent at the end of January, despite opposition from the government. However, the current level is still not enough to animate the domestic market.

The housing sector is feeling the contraction in the domestic market deeply. According to the Turkish Statistical Institute (TÜİK), house sales in Turkey suffered an 8.6 percent decline in the first five months of this year. The drop in purchases with mortgage loans particularly attracts attention. The number of loans sold in the first five months, which was 202,000 last year, plunged by 34 percent to 134,000 in 2014, figures show.

This retreat is not only about high interest rates, however, as distrust in the economy and its future are also quelling the appetite of potential buyers. 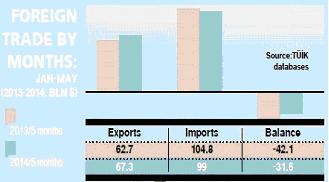 The domestic market dejection in the housing market is also being felt in the automotive and white goods sectors.

Things are no different in the white goods sector either. Refrigerator sales recorded a decline of around 14 percent in the first five months compared to the same period last year, meaning that 130,000 fewer refrigerators have been sold in the domestic market.

Amid the contraction in the domestic market, foreign trade and the foreign exchange balances are experiencing different times. When the domestic market contracts, foreign demand comes to the forefront and exports witness a rise, even if just a pinch. On the other hand, increased currency rates discourage imports, leading to a contraction in the foreign trade deficit as the imports needed for investments also plunge.

The dollar’s 20-percent and the euro’s 25-percent value gains against the lira have rendered exports from Turkey appealing.

In the housing sector, sales to foreigners are not worthy of note. Of 432,000 houses sold in the first five months of the year, only around 7,000 houses have been sold to foreigners in return for foreign exchange – not even 2 percent of overall sales.

In the automotive sector, exports are carrying the market through for now. Exports soared by 24 percent to reach 242,000 total units in the first five months of 2014. The wheels are therefore turning in the auto sector thanks to exports and production rose 17 percent with the help of the foreign trade boom.

However, the picture is not so bright for the refrigerator sector, as both domestic sales and exports plunged by 10 percent. The decline in production was 16 percent.

The washing machine market is still balancing the gloomy outlook in the refrigerator sector. Domestic sales contracted 9 percent but there was a 9 percent increase in exports, leading to a production rise.

When looked at generally, foreign trade looks like this: While exports reached $67.4 billion with a 7.4 percent annual increase in the first five months of 2014, imports reached $99 billion after decreasing 5.6 percent compared to the same period last year. Therefore, the foreign trade deficit dropped to $32 billion.

As a result of the drop in investments during the period, machinery and tools as well as industrial product imports also declined noticeably.

The economy looks likely to miss the 4-percent targeted annual growth, after a first six months in which investments dropped and stock products were exported while production continued at a snail’s pace for stocks.

The first quarter growth of the Turkish economy, which was carried by exports, lost momentum in the second quarter.

Moreover, volatilities in Turkey’s second largest export market, Iraq, are adversely affecting exporters, which will likely cause the country to turn to the domestic market to avoid further problems.

The most recently announced June consumer confidence index recorded a 3 percent decline compared to May. Expectations are falling. The “cut the interest rates” pressure won’t go away, but it looks like these calls will be voiced by presidential candidate Erdoğan’s close circle, rather than himself. On the other hand, an escalation in the covert rift with those ministers who don’t want the Central Bank to be intervened in, such as Ali Babacan and Mehmet Şimşek, is possible.

Related Posts
Can Erdogan push for his ‘crazy project’ amid economic crisis?(Al Monitor, July 22, 2020)
Even though no tender date has been set for the construction of Turkey’s controversial Canal…
Who is really driving the slump of the Turkish lira? (Al-Monitor , May 10,2018)
ARTICLE SUMMARY Though the flight of foreign investors is often cited as the main factor…
Cinnetin sonu uçurum(*)
Sık sık başvurduğum bir benzetme var AKP rejimi, özellikle lideri RTE için: Ters yönde…