Local administrations are only able to use 10 percent of the public expenditures in Turkey, according to OECD data. This is a huge obstacle for Turkey on the road to becoming a real democracy

Turkey is counting down the days until the coming local elections on March 30, 2014. These elections are of great importance for testing the policies of the ruling Justice and Development Party (AKP).

Turkey is counting down the days until the coming local elections on March 30, 2014. These elections are of great importance in testing the policies of the ruling Justice and Development Party (AKP), rather than finding out which political party will take which municipalities. While the AKP does not want to lose votes on a national basis, the opposition parties are looking to weaken the AKP, even if only slightly.

Local administrations really matter, however. They constitute perhaps the most basic constituents of the democratization process, representing a good indicator showing how democratic a country is.

The point here is the share that local administrations, namely municipalities, states or sovereign regions, take from the central budget of a country says a lot about that country’s democratization level.

Turkey ranks very low among all OECD members in allocating sources to local administrations from the central budget.

The government’s share in the central budget’s expenditures has increased a lot over the last decade with a significant rise in foreign capital inflow, in indirect taxes and in privatization income, increasing to almost 40 percent of the national income. This is higher than the case in some European countries.

The distribution of public sources between the central and local administrations is much more balanced than it is in Turkey, which ranks first in “centralization,” allocating really high resources to the central government.

Local administrations are only able to use 10 percent of the public expenditures in Turkey, according to the OECD data. Turkey is followed by Ireland. The share of local administrations in the central budget is around 20-30 percent even in France and the United Kingdom, which are famous for having very centralist governments, while the share increases to up to 40-60 percent in Canada, the Czech Republic, Mexico, the United States, Germany and Belgium. 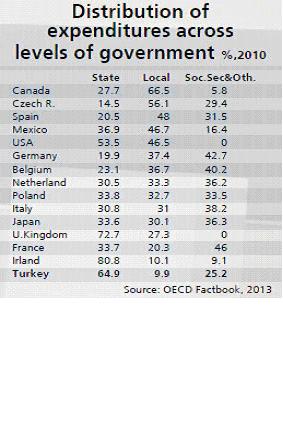 There are of course many historical, economic or other reasons why local administrations are so weak in Turkey. A majority of the population had lived in the rural areas of Turkey even until 1960, so the country has really lagged behind in terms of healthy urbanization.

The most developed cities are able to collect higher local taxes and earn more money from their highly expensive land. They are also able to borrow money under the Treasury guarantee.

Formed by Law No. 644 on July 4, 2011, just three weeks after the 2011 elections, the new ministry has been responsible for the approval and construction of some special areas, such as finance centers, among others. It gives the ministry some authority over local lands above all municipalities. 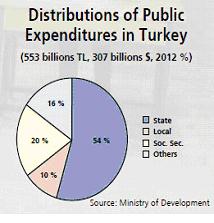 While Turkey is heading into another local election, the anti-democratic gap between central and local administrations can be discussed more

Here, some sort of democratic decentralization should be discussed further to enable local administrations to have more resources. Turkey may really take a big step on the road to democratization by an effective administrative reform that will give much more say to local administrations, maybe “local parliaments,” over the regions or cities in which they live.