The April consumer prices which increased higher than expected at a rate of 1.3 percent have caused despair about the course of increases in coming months. The Central Bank, which has revised the inflation target from 5 percent to 7.6 percent, has claimed the pace of price increases will lose its tempo as of June, but this claim is not regarded as realistic.

Prices, which have increased around 5 percent in the first four months in order to be able to complete the year within the Central Bank target of 7.6 percent will have to remain at a 2.5 percent increase in the total of the remaining eight months. General developments show this will not be quite possible.

Market observers who have stated that a 2.5 percent price increase for the rest of the eight months in 2014 is not quite possible are drawing attention to the rising food prices, especially after a dry season and the delayed rises in prices of natural gas and electricity. The prices of food and beverages that have almost 25 percent share in family budgets have increased 13.2 percent in the period between April 2013 and April 2014. The huge hike in the prices of potatoes and legumes in the past 12 months are particularly significant.

The price increase in potatoes in the past 12 months has reached 166 percent. The increases in the prices of beans, rice and other legumes are also in extraordinary dimensions. While the increase in dried beans in 12 months has reached 75 percent, the increase in rice has exceeded 42 percent.
In the circumstances of 2014, as the arid climate continues, the biggest threat for consumer prices is expected from vegetables, fruit and meat prices. It is a concern that prices will not fall below two digits even in the summer months.

It was interesting to see the housing expenditures that have a share of 16.4 percent in family budgets, price increases remained under 5 percent in an annual inflation rate nearing 10 percent. One factor is the low course of house rental hikes, but at the same time it is observed that the low course in this group’s price increases are also due to the delayed rises in natural gas and electricity prices.

The annual inflation’s course toward the 10 percent band makes the fees, wages and retirement payments which have been adjusted according to the annual inflation target of 5-6 percent remain under double-digit inflation; thus, this also means a significant loss in purchasing power.

The 5 percent inflation of the first four months has already caught the adjusted wages and fees. It is in the agenda of unions of public workers and retiree associations to demand adjustments starting especially from the month of June in civil servant wages and retirement fees taking into consideration the deviation in inflation. The revision is expected to cover minimum wage as well.

The number of unionized workers (9 percent of the total registered workers) can only reach 1 million and their real fees have increased 2 in one thousand during the 2005-2013 period; whereas economic growth in the same period has been 4.4 percent. Thus, workers did not get any share from growth. The situation is a little bit different for civil servants, the number of which reaches 2.6 million. The real salaries of civil servants during the 2005-2013 period have increased around 4 percent, nearing the average annual pace of growth. In this sense, it could be said that civil servants are in a better place in terms of their share in the distribution. 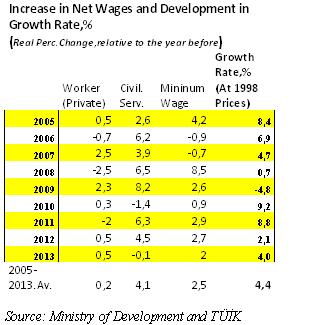 The situation is not at all good for millions of minimum wage earning workers. For years, the real increase in the minimum wage which was 846 Turkish Liras net ($402) at mid-2010 has been following a course behind the growth. The minimum wage figure net of inflation shows an increase of an average of 2.5 percent annually.

This is 2 points behind the annual 4.4 percent growth rate and it shows minimum wage earners are also left behind in taking their share in the increase in welfare. The climb of inflation to around 10 percent, unless restitutory adjustments are done, will mean that 2014 will also be another year added to lost years in terms of the wage-earning class.