It could be said that, in the climb of the ruling Justice and Development Party’s (AKP) regime beginning in 2003, in the rise of its voting base from 30 percent to 50 percent, that it was the rapid growth of Turkey’s capitalism experienced in the 2000s which has been the most effective contributor; moreover, it has played the most significant role.

The political Islam that did not reach a 20 percent share of the total votes in the 1970s, 1980s and 1990s was in power after the Nov. 3, 2002, elections with 34 percent of the votes. It increased its votes in subsequent elections and became the first party; in its building of an Islamic regime, economic growth and its economic platform have played the most important role.

This growth was made possible by foreign capital inflow that reached $40 billion annually. This foreign resource was mostly used in the domestic market. In this domestic market-oriented growth, it was construction, especially mass housing, that led the sector.

As of 2014, the AKP regime clung on to this line, insisting on it because they prioritized their political targets more than anything else. It was a preference at the cost of leaving a huge foreign debt of $400 billion (half of the national income) and a series of fragilities and structural malfunctions.
The political gain of focusing on construction is maybe more than its economic gain.

Before the AKP government, Turkey went through a crisis in 2001 and in order to overcome this crisis a bitter program controlled by the International Monetary Fund (IMF) and using IMF loans managed by former Deputy Prime Minister Kemal Derviş was implemented. This bitter program was what the AKP inherited with its “reformed” economic infrastructure after 2002. With the appeal of a revised, updated economy, beginning in 2003, foreign capital rapidly flew into the country, creating the platform for the construction-oriented growth.

In the junction reached in 2002, instead of construction, export-based industry could have been chosen and growth would have proceeded “industry-oriented,” but this was not done. While the AKP chose construction as the locomotive, its political expectations were, at the least, as high as its economic expectations. Construction was quite a suitable track, both for attracting voters and for creating the AKP’s own organic capital-owner. 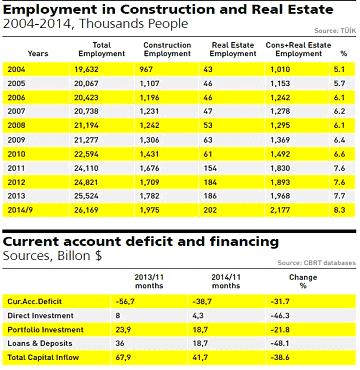 The rapidly rising housing complexes, skyscrapers, malls, accelerated municipality investments, double-wide roads, highway investments, airports, tunnels, metros and viaducts; these were all accomplishments that the voter would perceive as growth-development.

Moreover, each construction investment meant job opportunity for a significant segment of the population, including producers of construction materials, operators of construction equipment, small and medium-sized construction subcontractors and both qualified and non-qualified workers. The number of people working in the construction sector was around 1 million in 2004; by 2014, this figure had reached nearly 2.2 million. This corresponds to an increase of 115 percent during that period. While the share of the sector in total employment was 5.1 percent in 2004, by 2014 it had risen to 8.3 percent.

These construction-real estate employment statistics are for those workers who are directly involved in construction. Those employed in the production of construction materials, workers in stone quarries and marble quarries or the while collar personnel in the service sector, should also be added to the 2.2 million number. When they are added, then we can say that the share of this sector in total employment will go beyond 10 percent.

The sector’s dependence on “licenses” from the local and central administrations plays an important role in the AKP’s passion for construction. A series of decisions, from construction permits to occupancy permits, to development plans of a plot, to the number of flats or changes in a project, are all in the jurisdiction of municipalities, the Environment and City Planning Ministry and also the Mass Housing Authority (TOKİ). It was observed in the transcripts of the phone recordings that were revealed during the Dec. 17 and 25, 2013, graft operations how Ankara was interfering in these decisions and what kind of unjust profits were obtained.

The construction industry’s dependence on licensing from the political authority also creates the opportunity for favors and look-outs for contractors, the selection of project partners and the way the authority issues licenses. The AKP has found the opportunity to create its own bourgeoisie by using these powers within the constriction-oriented growth.

The General Directorate of Building Land Office, the agency that manages public land, has been associated with TOKİ since 2003, granting vast stocks of land. Emlak Konut, which is the land marketing associate of Emlak Bank, was also made an associate of TOKİ. After this, the most prestigious plots and luxury housing units were built by construction groups such as Ağaoğlu, Aşçıoğlu,Varyap, İhlas, Torunlar, Kuzu and Egeyapı.

While the pro-government contracting firms grew rich through this model, their dependency on the AKP also grew. Contracting groups for public construction bids were added to them. Company groups such as Limak, Cengiz, Kolin, Kalyon and Çeçen peaked by winning infrastructure bids from the state and remaining loyal to the AKP, as pro-government capital owners.

It is of course the decision of the political authority in the construction sector for this much dependence on “state licenses,” to which the profits of a metropolis such as Istanbul would be granted. However, it is also understandable that the entire profit would not be granted completely to the capital owner. A portion of this profit could have been given directly to the AKP or to foundations under its control as donations. It can be said that these donations have become the most important leverage in the AKP’s political climb.

Is it the end of the paradigm?

As of mid-2013, the inflow of foreign capital to Turkey halved. Balance of payment data from November 2014 shows that the total of foreign resources inflow in the first 11 months had been below $42 billion, whereas, in the same period in 2013, this total had reached $68 billion. This corresponds to a drop of nearly 40 percent.

The foreign capital inflow, instead of being direct investments, was structured as “foreign loans” to the rate of three fourths. This was used mostly in construction, in other service sectors oriented toward the domestic market, in consumption, in industry intermediate goods and for the import of investment goods.

It was obvious that an economy which was oriented toward the domestic market, which was dependent on domestic demand, two aspects which have been consolidated with the performance of the construction sector, was unsustainable with decreasing foreign capital inflow. The orientation toward the domestic market meant a continuous appetite for foreign currency, a continuous current account deficit and, in order to finance it, foreign loans. The stopping of the money inflow meant the stopping of the economy and stagnation became apparent in 2014.

Here also, the construction sector, more precisely the house-building sector, was the one that began having troubles the earliest. As a matter of fact, the hike in foreign currency rates that was prompted by the drop in foreign resource inflow and the increasing of interest rates to curb this caused house sales to drop. Despite all the campaigns and facilitations of long-term sales, according to Turkish Statistical Institute (TÜİK) data, new home sales in the first 11 months of 2014 increased only 1 percent compared to the same period in 2013. In Istanbul, where 20 percent of the sales take place, new home sales fell 3 percent, whereas in Ankara, which has a 10 percent share in sales, home sales fell 1.5 percent. Mortgage sales in particular fell. While the share of mortgaged new home sales was 40 percent of the total home sales in 2013, this fell to 30 percent in 2014. This should be an important warning for the sector.