Turkish Prime Minister Erdoğan said the following words to the public in the Aegean province of Muğla last week: “Please, be sensitive in taking credit cards. They are the biggest source of the interest rate lobby. Live within your income and do not be used by this lobby. Members of the lobby may take what you have.” 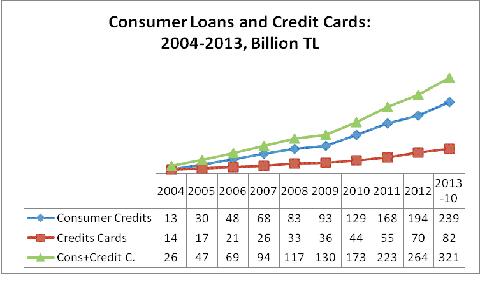 Consumer loan debts of Turkish citizens increased up to 240 billion Turkish Liras by the end of last October. Some 45 percent of it is comprised of housing loans. Namely, thousands of houses built by the state-run housing agency (TOKİ) and other construction firms could be sold easily with the loans of the “interest rate lobby.” Turkish people’s debts from car loans are around 8 billion Turkish Liras. The most noteworthy point here is the debts from “personal loans” are surpassing 124 billion Turkish Liras, representing 49 percent of all consumer loans. This means people tend to pay their debts by becoming more indebted.

Families and people are indebted to banks over 321 billion Turkish Liras ($160 billion) under the rule of the Justice and Development Party. Economy administration could say such a debt amount is not that high, not over half of the households income in Turkey. And the members of this club may note this percentage is over than 100 percent in some EU countries. They, however, must be forgetting the above-mentioned amount is covering Turkish people’s bank debts, excluding their informal debts. Families and people tend to be indebted to many informal sources from groceries to usurers.

Even such high amounts of banking debts urge the government to act cautiously. The debt stock of banks has brought about very high profits to the banks. At the same time, domestic demand has been increasing and people have been buying many things from domestic appliances to houses and cars until now.

Consumers’ debt has been triggering domestic demand, but not exports. Production for domestic demand is mainly relied on imports. Then what? The more lending to stimulate domestic consumption we see, the higher the imports compared to exports are, widening the country’s foreign trade gap, which cannot be compensated by tourism income. All of these factors push the country’s current account deficit up, even over 7-10 percent of the national income.

Rapidly rising current account deficit may be the strongest indicator to show the weakness of Turkish economy. Even the IMF addressed the high current account deficit and rising inflation rates of Turkey in its latest report. The year-on year inflation rate increased up to 7.3 percent, although it showed some decrease in November, still very far above the annual target.

Banks find money on relatively lower interests due to the global economic crisis environment. They used to sell this money mainly to consumers in Turkey. This has been enabling the domestic demand to be lively, but pushing the current account deficit up.

Turkey’s banking system offers over one-thirds of its loans to as consumer loans and in credit cards. Loans to the small and medium scaled enterprises (SMEs) are reaching up to 26 percent of the total. 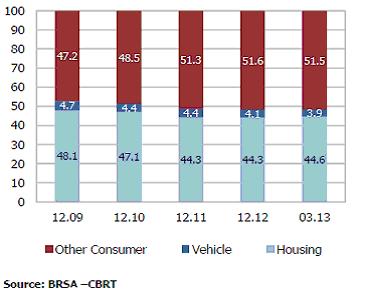 The government finally decided to make a series of regulations to restrict the use of loans and credit cards. These measures were stated in the economy program with the following words: “Some macroeconomic measures have been taken to increase domestic savings and to control the rising consumer loans that have negative impact on the country’s current account deficit with a series of regulations that have been published in the Official Gazette by Oct. 8, 2013. In this vein, minimum payment rates are increased for credit cards. It was also decided that the limit of a credit card could not exceed 4-fold of the card holder’s income. Besides, if people cannot pay their minimum payment three times successively, their card will be temporarily closed to ‘cash advance’ and if they cannot pay their whole credit card debt three times successively, their card will be closed to spending. Such cards will not be reopened until all of the debts are paid. And the weighted risks on credit card installments are increased by 25 percent for 1-6 months, and by 50 percent for longer periods of installment.
General reserve ratio and the weighted risks are increased in car loans. Furthermore, consumer loans are redefined so as to include credit cards and credit deposit accounts, and then the reduction rates for added general reserve ratio were redesigned.”

All of these measures aimed at reducing domestic demand. Some so-called good measures were taken to increase exports, as stated in the text with the following words in italic: “General reserve ratio for export loans was decreased to 0 (percent) from 1 percent and for SMEs loans to 5 per mille from 1 percent to support both exporters and real sector.”

It is difficult for these measures to support exports as long as the Euro crisis goes on, but not to reduce domestic demand.

Criticisms have raised against the regulations from both banking sector and the real sector, specifically from the durable goods producers. Even some of them said they could issue their own cards to stimulate demand.

It will be fairly difficult to put the dollar back against Turkish Lira when the U.S. Federal Reserve (Fed) start to taper. And the Turkish Central Bank will need to raise interest rates willy-nilly, pushing domestic demand down more. Turkey will see these grey days at the same time with the coming elections. It is a real mystery how the government could slide over this bottleneck by not making its voters annoyed.

Related Posts
Turkey’s external debt drops $25 billion at a stroke(Al Monitor, August 26, 2021)
Turkey’s central bank has revised some of its data compilation methods and definitions, as a…
Is Gulf money really a lifesaver for Turkish economy?(Al-Monitor, January 27, 2017)
Summary:  Despite assertions of impending major Gulf investment in Turkey, Europe continues to provide the…
Turkish consumer inflation soars to 73.5% (Al Monitor, June 3,2022)
Turkey’s consumer inflation has hit a 24-year high of 73.5% and the Turkish lira has…