As we are approaching the end of the year, the report card grades of the Turkish economy have started to become obvious. The government gets a “B” on growth for approaching its target, but it deserved an “A” on the budget because it didn’t break discipline. However, growth couldn’t create enough employment and the government got a “D” for the fight against unemployment. It also got an “F” for the current account deficit because of its chronic failure on the matter.

The economy grew 4.4 percent in the third quarter. The growth rate was 4 percent in the first nine months. The last quarter (October-December) will be announced by the end of March 2014. The annual growth for 2013 is expected at around 3.5 percent. What was the target? It was 4 percent. So, the economy will grow a little lower than the target. The administration deserved to get a “B” in that class.

However, the growth is based on domestic markets like it was in the past. This growth, which hasn’t resulted in foreign exchange but results in spending on foreign exchange, widened the current account deficit to 8 percent with a two-point rise from last year. While the national income was $584 billion in the first nine months of 2012, it was $620 billion in the same period this year. The current account deficit rose from $35.7 billion in the first nine months of 2012 to $49 billion in the same period of this year. As growth rose, the foreign exchange gap also rose. Because the growth is based on goods and services productions, it means it is dependent on imported input. As exports lag behind imports, the foreign trade gap has widened. The current account deficit of the first nine months ($49 billion) totaled 8 percent of national income ($620 billion), giving it a grad of “F.” 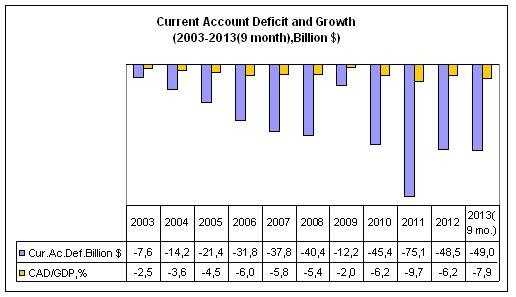 The government implemented restrictions against consumer loans and credit cards at the beginning of October. The banks are unhappy, but they have to comply with them. Otherwise, domestic consumption based on borrowing and imports will increase and the current account deficit will go down a more dangerous path with this domestic consumption. The volume of consumer loan and credit card debt balance reached 321 billion Turkish Liras at the end of October.

The growth in domestic demand has affected public finances in 2013 as well, although the government gets an “A” for its performance in public finances. High domestic consumption creates easy income for the Treasury due to a tax system in which the share of indirect taxes is more than 65 percent. The higher consumption is, the higher the income from value-added taxes, private consumption tax and import taxes. The more registered workers are, the higher the social security premium is. The public sector doesn’t tend to make investments with the exception of the transportation and educational fields. The government is also very careful at maintaining the number of public servants and their salaries. As interest rates are generally low, the Turkish state pays lower for interest expenditures.

It is more unbearable to fight the budget deficit when the country is also suffering from a serious current account deficit. Such combination repels foreign investors. The government knows this so it has been very careful at managing the budget this year. The government appears set to close the year with a budget deficit of around 2 percent of GDP, reducing this share to 1.3 percent in 2014. This is a very good performance when it is remembered that the same portion is around 5-6 percent in the EU.

When the budget deficit is lower, the public sector needs lower debts. The public debt stock appears set to end the year at 37 percent, quite lower than the EU average, which is around 80-85 percent.

The government has not, however, been successful in fighting unemployment. Despite high growth rates, employment has not increased. The latest September data confirm there is a rise in joblessness rates as expected. We have seen that unemployment increased to 10.2 percent and non-agricultural unemployment to 12.6 percent based on non-seasonally adjusted data in September from 9.4 percent and 11.8 percent, respectively, compared to the same period of the previous year.

Some 700,000 people joined the workforce in the last year, according to the data. Some 400,000 of them are employed, but the remaining 300,000 couldn’t find a job. This shows the number of unemployed people increased to 2.9 million this September from 2.6 million last September.

Let’s elaborate on which jobs these 400,000 people found: It appears that some 130,000 jobs were lost in the agricultural sector and 15,000 jobs in construction sector. Some 180,000 new jobs were created in the industrial sector and 365,000 in the services sector. Employment appeared to increase by 1.6 percent, much lower than the economic growth rate at around 4 percent during the same period.

Can Turkey maintain its growth rate? Not easily. Banks have already been asked to tap their money flow. Even more, interest rates are about to be hiked, which will make it more difficult to borrow money. It becomes less possible for Turkey to grow on domestic consumption at a time when there will be three elections. The exchange rate will most probably hike with the Fed’s decision to start to taper. If interest rates are increased to fight against this problem, then the economy will shrink. There is another alternative: To increase exports, but the EU market doesn’t give hope. 2014 may be difficult for the Turkish economy, which has grown thanks to the construction sector, but cannot anymore.