The dollar/Turkish Lira parity went above the 2.68 level at mid-week last week and it has shown a tendency to remain in the 2.75 lira band. The Central Bank had to make a written intervention in this situation and “challenged” that in its April 22 meeting; they would make a decision for deterrence from the dollar. Despite this, it was said that the Central Bank’s selling of foreign currency from the reserve and other efforts would not be very effective and after crossing the psychological 2.65 lira border, for the dollar to remain in the 2.80 lira band was highly probable. 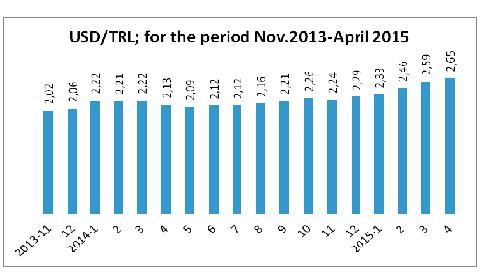 The U.S. dollar which started 2015 at 2.32 liras rapidly gained value in the following three-and-a-half months. The lira with its 17 percent devaluation in three-and-a-half months was the local currency that lost the most against the dollar. Even the loss of the local currency that was the closest to the lira in depreciation, the Brazilian real, remained at 14.3 percent. The EU’s emerging peripheral country, theCzech Republic’s koruna, lost less than 12 percent while the Polish zloty lost 6 percent and the Hungarian forint 5.4 percent. Devaluations in other developing countries were limited. The South African rand lost less than 3.5 percent, the Indonesian rupiah less than 3 percent and the Mexican peso around 2.3 percent.

The resilience against the dollar of the currencies of other emerging countries in the first three-and-a-half months is also noteworthy.  TheRussian ruble was able to stop the loss of blood against the dollar in 2015 by both decreasing its political risks and increasing interest rates. It can be seen that it has made up for the 16 percent of its losses against the dollar.

Among emerging countries, India is one of those that were able to hold their currencies strong against the dollar and in 2015 the rupee has gained 1.6 percent in value. Other Asian currencies can also be considered in this category. The Thai baht, the Korean won and the Philippines peso did not lose value against the dollar in 2015, compensating their 2014 losses slightly. These countries are preferred by those international funds that are leaving Turkey.

The Japanese yen maintained its value against the dollar in the first three-and-a-half months of 2015. The Chinese yuan also has not yet made a devaluation move against the dollar. The situation is different for the euro; in 2015, the loss of the euro against the dollar has exceeded 11 percent. The positive contribution of this to the EU exportation is the other side of the medallion.

Why the Turkish Lira?

The reason why the lira among all the other local currencies has lost the most value can be explained by the political risk Turkey is going through, economic fragility, geopolitical risk and the U.S. Fed’s upcoming raise in interest rates.

Elections surveys for the June 7 elections do not give any clear results for the future of the ruling Justice and Development Party (AKP) government. This is considered an important factor why foreign capital is leaving. In the case the Peoples’ Democratic Party (HDP) crosses the 10 percent threshold, the AKP may weaken and thus the possibility of a coalition government may emerge. These risks reflect on the current level of the lira.

A summary of the risks can be compiled from a report issued by International Credit Rating Agency Moody’s on April 5. Moody’s did not change Turkey’s rating and outlook. It did not announce a credit score this April, as it also had not in August 2014 and December 2014.

In May 2013, Moody’s had evaluated Turkey with a Baa3 credit rating following Fitch, which corresponds to the “investigable” level, then in April 2014 it changed Turkey’s outlook from stable to negative.

Important points in the report are as follows:

1) While Moody’s is evaluating Turkey’s institutional power, it said that main regulatory institutions lacked independence and that those institutions may be considered as having weak credibility.

2) According to Moody’s, Turkey is always open to risks and is fragile. This vulnerability is associated with the tense political environment and the foreign financing position related to this. Moody’s said Turkey was open to geopolitical risks due to the ongoing civil war in Syria and the crisis in Iraq. Also the risk of a breakdown in the peace process makes Turkey’s economy fragile. The report does not see an upward move in Turkey’s credit rating possible in the short-term due to the size of its foreign imbalances.

3) According to Moody’s report, in the case the recovery observed in the public debts in the past few years reverses and in the case that foreign capital inflow halts or its risks increases and/or important institutional changes are made that would weaken the investment environment of Turkey, then there would be a downward pressure on the credit rating of Turkey.

One other important factor that causes a loss of appetite for foreigners is the fact that Deputy Prime Minister Ali Babacan will leave the helm of the economy. Prime Minister Davutoğlu said the other week it would not be correct to assume a crisis would erupt in the country because Babacan would not be in the cabinet after the June 7 elections because of the party’s internal three-term ban. The prime minister said there could be a non-deputy person taking up a ministerial position but new people should be given opportunities, signaling that Babacan may not be included in the cabinet. According to a Reuters story based on AKP sources, the former head of Istanbul Bourse, İbrahim Turan, may replace Babacan as the state minister in charge of the treasury.

The main reason for the U.S. dollar to gain value in a broad band is considered as the U.S. Fed’s making its first rate increase this year, and is thus expected to dissociate from other developed countries in terms of interest rate.

After the minutes of the March 17-18 Federal Open Market Committee (FOMC) meeting were released, perceptions started differing. According to the minutes of the meeting that was held before the non-agriculture employment data was made available, some participants said interest rates should be raised in June, while the majority of other participants said the interest rate hikes should be done in the remaining part of the year.

According to the minutes, a couple of members said the economy would not be ready for interest rate increases until 2016. The fact that the FOMC meeting was held before the non-agriculture employment data of March was disclosed and that Fed officials revised the benchmark interest rate estimates of the end of 2015 from 1.1 percent to 0.6 percent at the meeting were regarded as a sign that interest rate increases in June were quite a weak possibility. 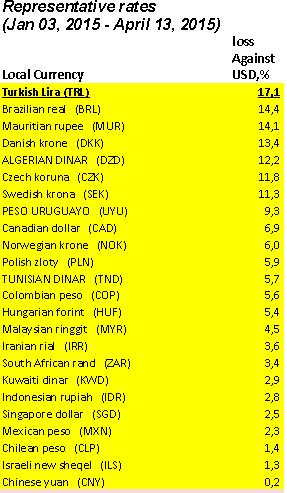 Nevertheless, the mention of the possibility of interest rate hikes in June in the FOMC minutes created a perception that it will have a strengthening effect on the dollar in the markets. However, even if interest rate hikes start in June, latest developments point to a gradual increase. Especially the International Monetary Fund (IMF) is warning the U.S. administration as such and reminding of the possibility of a capsizing of the “global village” due to harsh waves.

As a matter of fact, New York Fed head William Dudley said in his speech last week that when interest rate hikes start the increase will likely be “shallow.”

All these domestic and international dynamics indicate fluctuations will continue until June 7, the devaluation of the lira against the dollar may continue as well and the Central Bank’s counter-movements may not be as effective as they are hoped to be.

We will wait and see.