In Turkey, the population over the age of 15 has increased by 8 million in the past 10 years and 70 percent of them have become wage earning employees. However, the number of self-employed farmers and tradesmen in agriculture and non-agriculture has remained the same.

The annual 5 percent economic growth experienced with foreign capital inflow in the past 10 years of the Justice and Development Party (AKP) government also caused an increase in employment, with the new arrivals mostly finding jobs as wage earners, not as small producers or as “self-employed entrepreneurs.”

The Turkish Statistical Institute (TÜİK) Household Labor Force Survey 2013 results reveal that the workforce has grown to 28 million and employment 25.2 million, in turn making the number of unemployed reach 2.8 million, corresponding to 10 percent of the workforce. The unemployment rate in 2013 in the non-agricultural segment is announced as 12.1 percent.

When the results of 2013 are compared to 10 years before the AKP government, in other words, the results of 2004, it is seen that the population that has joined the workforce in the past 10 years has found jobs predominantly as “wage earners,” and the number of people working as employers and tradesmen has not changed much in these 10 years.

While the number of those who have entered the labor force and found a job was 19.6 million in 2004, this figure went up to 25.5 million in 2013. In other words, there has been nearly a 6 million increase in employment in 10 years. Those who could not find jobs were recorded as “official unemployed” and in 10 years, their numbers rose from 2.4 million to 2.7 million. The unemployment rate stayed at an average of around 10 percent in 10 years from 2004 to 2013.

TÜİK data reveals that in the past 10 years, those who have entered the labor force were only able to find jobs as “wage earners,” that there has not been a significant change in employers and the self-employed and that mostly in the agriculture sector, the number of family workers is decreasing.

It is possible to name the AKP era as the fastest period of capitalism in Turkey. In return for fast capitalization, which resulted in a rapid increase in the number of workers, “entrepreneurship,” in other words, the number of those who work for themselves and the number of employers has not changed much in the past 10 years. The number of employers increased from 1 million to only 1,182,000 in 10 years. As a ratio, though, the share of employers went back to 4.6 percent from 5 percent. The number of those who are self-employed in agriculture and in non-agriculture, together with those who make their family members work for them without pay, has consistently remained under 8 million in 10 years; and as a ration their share, which was 40 percent in 2004, went down to 31 percent in 2013. In other words, while the tendency of those who joined the labor force after 2004 to set up their own business and to work in their family managements declined rapidly, being a wage earner emerged as the principal tendency.

According to the TÜİK Household Labor Force Survey date, there have been losses in shares both in agriculture in the total of the self-employed and unpaid family workers and both in the cities in craftsmen and family workers. In both segments, the number of small producers did not increase and their shares went back against the increasing employment. The shares of small producers and their families of both segments in total employment, which was 41 percent in 2004, went back to 31 percent in 2013, losing 10 points.

Small producers, which are the dominant component in the agriculture segment that has a one-fourth share in total employment, lost ground with the fall in agriculture. Agriculture employment, the number of which, together with “unpaid family workers,” reached 5.2 million in 2004 and went back to 4.4 million in the period between 2006 and 2008, then recovered in following years to become 5.4 million in the 2011-2013 period. However, the shares of small farmers and their family workers in total employment went back from nearly 27 percent in 2004 to 21 percent in 2013. In other words, economic growth did not cause an increase in agriculture and in the number of small farmers; in terms of ratio, it created an outcome that decreased the share of agriculture. 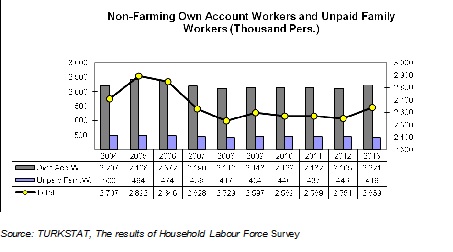 The decrease in subsidy purchases in agriculture and animal husbandry, the negative course of domestic trade rates against agriculture, with the young population’s preference of cities, the increased migration from rural to urban areas has caused stagnation and regress in agricultural production and employment.

The weakness of agriculture in creating employment was followed by the decline in small entrepreneurship in urban areas. TÜİK data reveal that the number of the self-employed in non-agriculture and their family members has not increased much in the past 10 years. The number of urban small producers and their family workers maintained a course at around 2.7 million in 10 years without increasing. The share of the urban tradesmen family lost four points in the past 10 years to go down to 10 percent.

In cities, with the rise of supermarkets and retail stores, a significant decline has been observed, particularly in the number of tradesmen engaged in retail trade. Likewise, the boom in major contracting companies and chain restaurants has caused many tradesmen to shut down. Also with the low growth rates in industry and the destructive effect of importing, it is observed that several small producers in the manufacturing sector are leaving the market and prospective new ones lack the courage to enter the sector.