The Turkish economy has recorded an average of 4.5 percent annual growth in the past 10 years. This growth, which has been made possible by the foreign resources flow that has reached an annual average of $40 billion, has generated more indirect taxes – namely consumer taxes – and consequently more means for public expenditure.

As would be expected, developed regions make a bigger contribution to the budget. Do metropolises receive a bigger share from expenditures? What were the budget contributions of the three big metropoles, Istanbul, Ankara and İzmir, and where do they stand from the point of income per capita?
Turkey has one of the biggest regional gaps in the civilized world. There is no way to stop the country’s Istanbul-based development. Those metropoles that balance the major inequality are the capital Ankara and the port city İzmir. But again, the size of each separately does not correspond to one-third of Istanbul.

Istanbul which is home to nearly 18 percent of the population presents a host of problems. Its population increase by nearly 2 percent each year, and in 2013, its settled population reached 14 million. When domestic and international tourists are added to this number, it becomes quite difficult to manage the crowd gathered in Istanbul. This mega city generates 27.5 percent of the country’s national income. Out of the total workers in Istanbul, 62 percent are in the services sector and 38 percent are in industrial sectors. Ankara is home to 6.4 percent of the country’s population and its contribution to the national income is 8.5 percent. As would be expected, it is a services sector metropolis.

İzmir has a share of 6.6 percent of the national income, but different from the other two, 12 percent of its population is in agriculture. In İzmir, industry and services have an equal size. 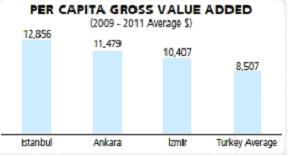 During the same period, Istanbul’s per capita income was nearly $13,000, meaning İzmir was about 20 percent less than Istanbul, as well as 10 percent or about $1,000 less than Ankara.

The three big cities have a share of 43 percent of the country’s national income. Naturally, they make the biggest tax contribution to the state budget. In the 2013 central budget, Istanbul contributed 42 percent, Ankara 15 percent and İzmir around 10 percent to the “non-central revenues” of the government, or 359 billion Turkish Liras. In other words, two-thirds of the taxes were provided by these three metropoles. When taking into consideration that 70 percent of taxes are indirect taxes, it is an expected outcome that in these three metropoles, where 30 percent of the population lives and where nearly 40 percent of the national income is generated, two-thirds of the taxes are collected.

In the per capita share taken from expenditures according to per capita contribution to revenue, Ankara leads at nearly 64 percent, while Istanbul’s ratio is down around 12 percent. Istanbul alone produces 27 percent of the country’s national income, manages and accounts for the production of neighboring provinces and contributes around 42 percent to the central budget revenues that predominantly constitute taxes. At the same time, the city’s 14 million people use nearly 10 percent of budget expenditures. Thus, when the three big cities are compared, this picture emerges: While Istanbul can spend 11.5 percent of its per capita contribution on revenues, İzmir can raise it up to 23 percent, but in Ankara, where expenditures are much higher, this rate is 64 percent.

When expenditures from the central budget are categorized according to their functions, different data emerges. While education takes top place with its share of 46-47 percent in the total public expenditures of Istanbul and İzmir, in Ankara’s spending, “general public services” as well as economic and health and social welfare expenditures come to the fore.

The smallness of the share of Istanbul in public spending per capita, even though it may be compensated to a certain extent by the expenditures of local governments, still remains inadequate given the dense population which is continuously growing due to domestic migration amid the low quality of public services.Inadequate public investment and public spending per capita is a significant factor in delaying Istanbul’s leap to becoming a global metropolis.