After Turkey shot down a Russian war plane along the Syrian border on Nov. 24, 2015, the Russian administration decided on a series of economic sanctions against Turkey. Just three months on, this package is already starting to bite Turkey.
In a decree issued by the Kremlin toward the end of November 2015, certain goods from Turkey were restricted and all touristic trips to Turkey were suspended.

Mega energy projects in the energy sector were also mentioned among the economic sanctions but no official decisions have yet been made.
Exports
The first wave of economic sanctions was expected to affect Turkey’s exports to Russia and the tourism revenue from Russian tourists – expectations that were born out by reality. The losses from these sectors have started affecting Turkey’s economy. Tourism in Antalya and certain Aegean provinces, as well as agricultural produce earmarked for export have all been negatively affected by the embargo. 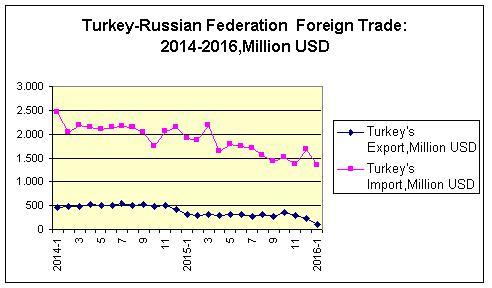 Suitcase trading is a type of trade that emerged to allow citizens to bring goods from other countries as hand baggage. The citizens of such countries can purchase goods at their destinations, for up to $2,000 for instance, and carry them in their suitcases or send them by cargo to their own countries.

This practice has been identified with Russian tourists in Istanbul’s Laleli district for a long time. At the beginning, the Russian government facilitated the practice but later it became difficult; the decision-making belongs entirely to the Russian government. Other alternatives such as Iran and Libya also emerged, but Russia has always maintained its importance.

Turkey’s tourism hub, Antalya, has been greatly impacted by the fall, with observers saying the negative effect will especially be felt in 2016. After Antalya, Istanbul is the next destination mostly affected by the crisis.

In addition to tourism facilities in Antalya which were designed for Russian tourists, the drop in fresh vegetables and fruits exports to Russia has harmed the province, as small- and medium-sized enterprises have begun experiencing tough times. Unemployment has begun, but the real impact will be seen in coming months.

Moreover, property sales have dropped in Antalya, which was prioritized by Russians in terms of property purchases. There is activity in the region, though, with property-owning Russians putting their properties up for sale.

Both countries have companies operating in the other’s nation. In Russia there are about 500 Turkish firms; 150 of them are contracting companies. Some of the Turkish companies operating in Russia include Zorlu Enerji, Enka, Anadolu Grubu, Koç, Şişe Cam, Eroğlu Giyim, Denizbank, Arçelik (Beko), Vestel, Ant Yapı, Rönesans, Gama, Soyak İnşaat, Tepe İnşaat and the Alarko Group of Companies.

Russia has more direct investments in Turkey, including the Akkuyu Nuclear Power Plant and some energy investments.

Russia’s direct investment stock in Turkey was $6.9 billion in 2006, constituting 7.4 percent of all direct investments. Even though they fell in the following years, they began climbing once more in 2012, reaching $9.2 billion or a 5 percent share in October 2015 with investments in the banking sector.

The direct investments of Turkish entrepreneurs in Russia was $367 million as of October 2015.

In 2014, Turkish contractors undertook $27.1 billion in international contracts, $6.5 billion or which was in Turkmenistan. Russia followed at $3.9 billion, then came Algeria and Qatar.

The tension with Russia and the resultant economic sanctions are expected to negatively affect the international contracting sector. It will also mean fewer jobs and fewer exports of construction materials.

Loans are a part of the economic relations of both countries. Russia looks as if it has mostly exported capital in the form of loans to Turkey.

In short, when 2015 data is compared with the data year-on-year, there are falling trends in the main items such as exports, imports, the suitcase trade and travel income – all phenomena that are expected to continue in the coming months.

How much of an impact will the economic sanctions that began in December 2015 have on Turkey in 2016? In an Economic Policy Research Foundation of Turkey (TEPAV) study, it was calculated that Russia’s economic sanctions on Turkey will cost Turkey’s economy a (real) loss of $2.3 billion to $8.3 billion in 2016. In this context, the Russian shock will pull down the economic growth of 2016 by 0.15 points to 0.90.

The sanctions are expected to have indirect effects also. While the direct effect in exports, tourism and the suitcase trade is expected to be $2.5 billion (real), the loss in incomes will be double, economists have said.

State subsidies will be needed to compensate for the losses in exports and the tourism sector, entailing a burden on the budget.

The government is announcing certain support measures one by one, but it is a big question as to what degree these steps will cover the losses.