With only three weeks left before the general elections, the resistance launched by metal workers in major automobile factories in Bursa, one of Turkey’s centers of industry, has shifted the focus to the “class struggle.” It looks as if the changing world and national economic climate will reflect on wage fights. Maybe, the classification that went on over identities for a long time in Turkey will return to its original course: class division.

The labor resistance that started in Bursa last week suddenly changed Turkey’s agenda, especially at a time when the election competition peaked… In two major automobile factories, Tofaş and Renault, workers revolted. Other workplaces again in the metal sector joined them and solidarity grew.

The reason is the employer, the union and the unsatisfying clauses in the last collective contract. In other words, the focus is on economics. The anger from economic dissatisfaction has blown back against the biggest labor confederation, Türk İş, and its organization in metal, Türk Metal. We can call this a “belated rebellion.”

The industries in the metal sector are the ones that generate the highest added value and profit in Turkey. While the leaders of Turkey’s bourgeois, Koç Holding, were leaving several sectors, one of their legs remained in metal, due to the reasons cited above. Koç is present in Tüpraş, Yapı Kredi Bank and two major automotive producers in metal (Tofaş and Ford), and in white goods (Arçelik).

Automotive and other metal sectors were mostly founded and developed in the 1970s. The employer’s union, Turkish Employers’ Association in metal industries (MESS), was supported by the Koç Group. Annoyed by the rising labor movement in those years, instead of banning trade unions all together, they made an effort to nestle Türk Metal in the sector. The new leftist and revolutionary trade union organization, the Confederation of Progressive Trade Union’s (DİSK) Metal İş, was heavily obstructed from entering the sector.

The toughest struggles all happened in this sector. MESS tried to control the union platform in metal workplaces mostly in Istanbul, Bursa, Kocaeli, Ankara and Ereğli with Türk Metal. This continued until Sept. 12, 1980.

In the anti-union environment of the military regime, DİSK’s Metal İş was closed by coup generals, leaving the arena completely to Türk Metal. Workers, in the already stunted union climate, looked as if they accepted their “estranged” membership in Türk Metal. 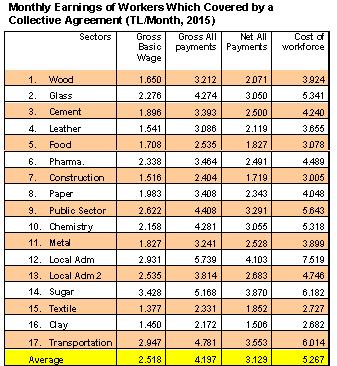 In the economic growth years of the Justice and Source:TİSK

Development Party (AKP), workers in major metal workplaces did not oppose their wages too much, given the “privileges” of being among the workers who had a union and a collective contract, which was 1 million in 17 million wage earners. The employers were making good profits with a growth model based on the domestic market, as well as making the wheels turn with orders from the Fiat and Renault main companies. Automotive firms and flat steel producer Ereğli Demir Çelik, Erdemir, had happy years under the AKP. Despite the 2008 and 2009 crisis, in the following two years, they recovered, especially gaining through labor.

However, since 2012, the market has stagnated. Car loans are decreasing; international orders are slowing down. MESS started making collective group contracts for three years and trimming many benefits, forcing workers into flexible work.

The strike of DİSK’s Birleşik Metal İş in the copper sector was banned under the name of “postponement” by the cabinet on “national security” grounds, further cornering the workers. The employers were not expecting any outburst from the workers, who were also besieged by the AKP regime. But the expected did not come true; the worker exploded…

Even though the metal workers looked as if they had unions and were able to make collective contracts, they were actually not happy with the conditions and regarded the distribution as unjust. Also, as any other household under the AKP regime, they were under the burden of loans. Their wages were insufficient to pay their loan installments. Their circle of livelihood was narrowing; the unions were not making proper deals. A spark was ready for a fire; when they saw they were behind the collective contract signed in Bosch, they rebelled.

Actions started and reactions to the union and employers grew, with only three weeks left until the June 7 elections.

Reaction to the resistance

Employers’ union MESS stated they would not change the signed collective contracts. Workers resigned from Türk Metal and union executives likened this act to the Gezi Park protests of two years ago in Taksim, Istanbul, looking for a “foreign conspiracy.”

At mid-week, it was not known to where this belated workers’ rebellion would evolve. The employer union did not want to renew contracts.

While the course of the worker rebellion in and around Bursa is curiously observed, let us have a look at the wages in the metal sector.

According to TİSK, the Turkish Confederation of Employer Associations, which issues regular reports on wages, workers under collective contract have an average monthly income of a little over 3,000 Turkish Liras (approximately 1,000 euros, or $1200).

According to TİSK, metal sector workers in Bursa who stopped work and demanded new contracts earn an average of 2,500 liras with benefits (approximately 830 euros net).

The cost of the average worker to the employers, with social security premiums, tax and employer’s social security premiums reaches 5,267 liras. For every 3,100 liras the worker earns, the state gains an equivalent of 2,100 liras in taxes and premiums. This means 58 percent goes to the worker, while 42 percent goes to the state.

According to TİSK, even if they are under collective contracts and members of trade unions, the lowest paid workers are in the clay, construction, textile, food, wood and leather sectors. In these sectors, a worker earns an average net monthly wage of between 1,500 liras and 2,000 liras.

On the other hand, the highest paid workers are the ones in the public sector. Workers in local administrations seem to be at the top of the list. Municipal workers, according to TİSK, earn over 4,000 liras net as a monthly average. Sugar sector workers follow them and gain 3,870 liras. In the transportation sector, which is dominated by the public sector, average net monthly wages exceed 3,500 liras. In the chemical and glass sectors where the private sector is dominant, the net monthly incomes of workers are about 3,000 liras.

According to TİSK, the metal workers rebelling in Bursa receive more than 2,500 liras net monthly. The cost of one metal worker is almost 3,900 liras. Workers in the pharmaceutical and cement sectors earn as much as metal workers do.