In Turkey’s economic agenda, as in several other emerging countries, there has been a conflict going on for a long time about the price of the interest rate and foreign currency. The price of foreign currency is determined by domestic and external dynamics at the end, but when it comes to the interest rate, the political will wants to take the independent Central Bank under its influence and make it do what it wants. However, wanting is not enough and the sharp wind of the market can seriously knock down this ambition.

For the international investor who was looking for a place to land in the world markets shrunken by the 2007-2008 global crisis, Turkey became an attractive address, especially in the years 2010 and 2011.
The volume of foreign currency grew by the inflow of foreign investments, pushing the exchange rates down. This situation also pulled down the interest rates.

In an economy oriented toward the domestic market, interest rates on consumer loans, which the consumer primarily uses for buying homes and automobiles, also followed a low course, making the mechanism work. However, after the domestic market-oriented growth expanded the current account deficit problem and when Turkey started having current account deficits reaching 8 – 9 percent of its national income, the brakes were pulled in 2012. In 2013, the pace did not catch up. 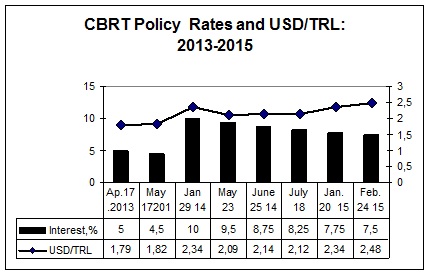 In mid-2013, the developments in the United States that were to affect all balances in the world economy also affected the paradigm in Turkey. When the U.S. Central Bank Fed announced it would reduce bond purchases and increase interest rates in time, the U.S. started becoming the center of attraction for the world capital that had temporarily parked at countries such as Turkey. Capital outflow started from emerging countries; new inflows weakened.  In the decisions of foreigners to change their positions, the political risks and geopolitical risks were effective as well as economic risks.

Until mid-2013, the interest rates and the foreign exchange rates followed a level that the ruling Justice and Development Party (AKP) wished; however, since then they are not following their wished course, but rather are fluctuating. It is such a fluctuation that every month the expectation of what the interest rates would be changes; the foreign exchange rate, especially the dollar, makes shocking hikes. These change the entire state of affairs of the economy. Especially in a Turkey which is going through the conjuncture of the general elections scheduled for June 7, the economy stands out more.

The Central Bank Monetary Policy Board made its last interest rate decision in the meeting it held on Tuesday, Feb. 24, and lowered the interest rates a small slice. With this decision, the top end of the interest rate corridor was cut by half a point; the lower end and the benchmark rate, a quarter point.
While the Turkish Central Bank was doing that, it said, “Taking into account the elevated volatility in food and energy prices, the Committee decided to cut the interest rates at a measured scale.”
President Erdogan is aiming for the AKP to come out of the June 7 elections with a victory large enough to be able to change the constitution. The presidency he is wishing for will only be possible through a constitutional change with such voter superiority. In order to gain this voter mass, he wants a boost in the economy. He is hoping that this boost will be possible with the lowering of the interest rates and the activation of the domestic market. For this reason, without caring about its cost, without calculating what kind of damage it would cause other equilibriums, he wishes that the interest rates are lowered.

The Central Bank is constantly under Erdoğan’s pressure. Some members of the cabinet are accompanying him. One of them is Economy Minister Nihat Zeybekçi, and he did not consider the 0.25 cut adequate. Zeybekçi said, “In Turkey the benchmark rate should be below 7 percent and the top end of the interest rate corridor should be under 10 percent. I have not seen any courage in the Central Bank’s decision.”

Prime MinisterDavutoğlu does not adopt the same dose of reaction as President Erdoğan and his entourage; he speaks more “moderately.” While speaking in Budapest, Davutoğlu said it was significant that the interest rates were trending downward and that this situation was one of the healthy indicators of the Turkish economy. Davutoğlu said, “It is positive that interest rates have a downward trend. I’ve said this before and would like to restate that we would like further monetary easing. We would like rate cuts to continue in Turkey.”

In its previous meeting, the Central Bank Monetary Policy Board (PPK) had lowered the interest rates from 8.25 percent to 7.75 percent. This decision also was not liked by Erdoğan and some cabinet ministers who want to face the election conjuncture with an economic boost through interest rate cuts. The pressure for a bigger cut forced the Central Bank to pledge to convene extraordinarily on Feb. 4 for a possible cut in the case that the inflation rate came out low. There was an immediate reaction to this pledge and the dollar rose 8 percent against the Turkish Lira from a level of 2.32 up to 2.51. However, when the January inflation came out higher than expected at 1.1 percent and when the reaction of the dollar to a cut was apparent, the Central Bank’s meeting to determine the interest rates was back to its normal schedule, Feb. 24.

Before the Feb. 24 meeting, President Erdoğan and some ministers continued their pressure that the lira was too high and the interest rate cuts should be bigger. The Central Bank’s quarter point cut did not make those behind this pressure happy, but the bank gave the message: “In the light of this inflation and the exchange rate pressure, this is all I can do.”

Over the Central Bank’s interest rate decision, the sides politicians are taking became clearer. While Deputy Prime Minister in charge of the economy Ali Babacan and Finance Minister Mehmet Şimşek supported the Central Bank, fearing the reaction of external markets and a possible overturn, it was interesting to see Bülent Arınç joining them. Prime Minister Davutoğlu though, opted for a more “central” path. Former President Abdullah Gül, who is preparing for a comeback to politics, is emphasizing the independence of the Bank.

Any decision on interest rates has an immediate effect on the price of foreign currency. Especially when foreign investors take positions according to the rising political risks and the international climate as well as the interest rate cut, then foreign exchange rates fluctuate. Against the upward effect on the dollar of the Feb. 24 cut decision, the speech of Fed president Janet L. Yellen on the same day had a counter-effect. When Yellen did not speak too promisingly about interest rate increases, the price of the dollar came to a stop, again. 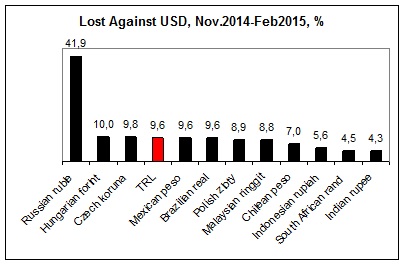 Despite this, political risks rising in certain regions, geopolitical risks, provide a suitable platform for the dollar to rise against all other currencies. In general, there is a devaluation of local currencies against the dollar in the world. The lira has lost 45-50 percent of its value in the past two or three years and whether it will continue to lose depends on the monetary policies adopted.

Oil-exporting countries, among which are Azerbaijan, Algeria, Iran and Libya, are trying to balance the growing gaps between their decreasing oil revenues due to the fall in oil prices and non-decreasing foreign currency expenditures, with high devaluations. Azerbaijan’s currency, the manat, has been devaluated 34 percent, for instance.

Rich countries also in accordance with the fall in the commodity prices, in order to support their falling exports devaluated their money against the dollar. Norway, Sweden, Denmark and even Canada were countries which devaluated their currencies in the past four month with a rate of between 12 and 14 percent.

Local currencies of emerging countries, of which Turkey is among, are going through significant changes depending on the preference of the foreign investor in the country. Among them, Russia  leads the group which, due to the Crimea and Ukraine issues and the effect of the economic sanctions imposed by the U.S. and EU, has devaluated the ruble almost 42 percent in four months.

The currencies of theCzech Republic, Poland and Hungary, which are considered the backyard of the EU, are among those that have lost value with the withdrawal of foreign investors. The Czech koruna lost 10 percent in the past four months, as did the Hungarian forint, while the Polish zloty lost nearly 9 percent.

The loss of the lira and others

Turkey stands out as another important country whose currency lost nearly 10 percent of its value against the dollar in the period between November 2014 and February 2015. While the average dollar price in November was 2.24 liras, it went up to 2.29 in December and in January it was 2.33 liras. The first three weeks of February were up 2.45 liras. This was the result of the pressure of the president and some politicians close to him on the Central Bank to lower interest rates and with the withdrawal of foreign investors the dollar/lira rate in February at one time exceeded 2.51.

The Mexican peso and the Brazilian real also went through devaluations almost as much as the lira in the past four months; however the South African rand and the Indian rupee had devaluations against the dollar relatively low, around 4.5 percent. It is observed that the foreign investors withdrawing from Russia, Turkey, Europe and Brazil are mostly trending toward India  and South Africa among emerging countries.