Uncertainties, doubts and the “wait-and-see” attitudes in the global economy have caused the local currencies of “emerging countries,” which includes Turkey, to heave a sigh of relief. Global funds that re-parked in these countries relatively repaired and strengthened the local currencies against the dollar. This support ranged from 15 percent to 5 percent at the end of the first four months of the year. The Turkish Lira, on the other hand, fell apart with the political confusion of the past week after it had recovered.

While a harsh winter was expected for 2016, how was it that the weather cleared, particularly after January? In December 2015, China and the rate hike in the U.S. emerged as double negatives. This situation continued until the last week of January. In Turkey the dollar reached its second highest level of 3.06 liras on Jan. 20.

However, the wind changed and a new quantitative easing wave by central banks in coordinated action was implemented, plus, the back-pedaling of the U.S. from a rate hike caused a U-turn in the global and Turkish markets.

This situation continued from mid-February until the beginning of May. The appetite for global risk taking revived. Capital inflow to developing markets increased. 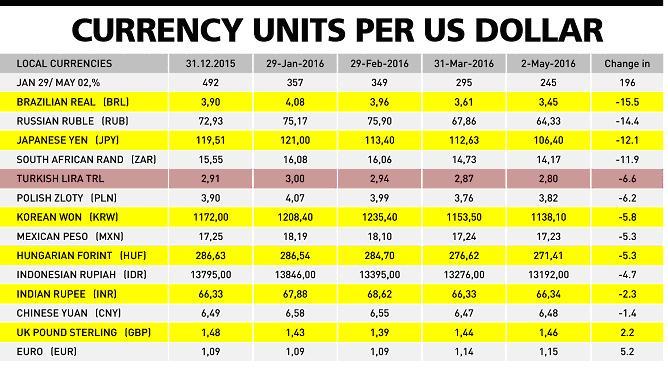 Among local currencies, the second local currency, after the Brazilian real, that recovered against the dollar was the Russian ruble with a recovery of 14.4 percent.

Another currency among the emerging markets that rapidly recovered against the dollar was the South African rand. Its recovery was 11 percent. The lira, Polish zloty and local currencies of South Korea, Mexico and Hungary also strengthened against the dollar.
Recovery of the lira

The recovery of the lira against the dollar in 2016 has also attracted attention. The price of the dollar reached 3.06 liras in January. This was due to global effects as well as domestic effects. The strengthening or the recovery against the dollar between the end of January and the beginning of May reached 6.6 percent. The lira was testing below 2.80 as it entered the month of May. Thus, it went down to the August 2015 level.

The acceleration of portfolio investments that started in February and accelerated in the following weeks were effective in the recovery of the lira against the dollar. The portfolio investments of foreigners, free from the effects of the exchange rate and market prices, rapidly increased. In the February to April period a net capital inflow of $4.5 billion was observed. The inflow at mid-April especially reached remarkable dimensions.

The course of the dollar vs. lira before the spring winds started to blow sent chills down the spines of the private sector segment, which had loans in dollars. Moreover, to protect companies from going bankrupt, it was even suggested that while the dollar was over 3 liras, the Central Bank should sell foreign currency at the rate of 2.75 liras.

At the start of past week, the value of the lira against the dollar had gone lower than 2.80 liras. This price was due to international causes more than domestic causes. However, with the political crisis erupting mid-week, the price of the dollar moved toward 3 liras. 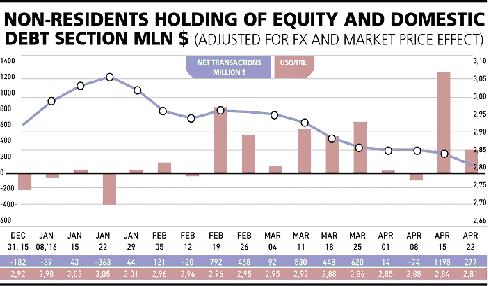 The disharmony crisis Prime Minister Ahmet Davutoğlu experienced with President Recep Tayyip Erdoğan and the decision reached by the ruling Justice and Development Party (AKP) to convene an extraordinary congress at the end of May suddenly brought the withdrawal of foreign investors and later the rise in the dollar. While it was seen that the price of the dollar was determined by international dynamics, the winds turned and a climate started where domestic dynamics were more effective, with a possibility that they would continue to be effective over the remaining months of the year. Now eyes are monitoring the Fed rates on one hand and on the other turned to who will become the new prime minister of Turkey. Moreover, there is a possibility that an early election could be held in the fall.

In this climate change of domestic politics, foreign capital movements become more important. If the inflow leaves its place to a withdrawal then the dollar may go up.

Internationally, the macro indicators of the U.S., especially the employment data of April, will affect the Fed’s June decision. The U.K. referendum, often called the Brexit, over withdrawing from the EU, which will be held on June 23, is also important. As the referendum nears, a certain effect over the markets can be expected. The European Central Bank’s meeting is on June 2. There is no magic wand in the hand of Maio Draghi, the president of the European Central Bank, to stop the valuation of the euro.

The Fed’s decision, which is scheduled for the mid-June meeting, will be more important. The probability of a rate hike is low for the time being. If data released before that time is very good, only then the rate hike may be an issue on the agenda. However, the main dynamic that will affect the process, for now, is the domestic political climate.