The occupational murder in Manisa province’s Soma district shocked the whole world and generated grief with its official death toll of 301. It has also brought coal mining and the working conditions in mines onto the agenda.

Mining in Turkey is generally discussed through work accidents and deaths rather than through its high added value, employment or exports. Mining actually has a small place in the economy in terms of added value and employment, but it has always been put under the microscope with its uncontrolled and risky working conditions.

In terms of mining resources, the central developed countries have for years processed third country mines and carried them to their countries as raw material, turning them into products with high added value. While they are trying to do the same things as much as they can, those countries that have become aware of the situation are trying to produce semi-processed or processed products with high added value, instead of raw materials, and are developing their exportation.

Again, when viewed as a whole, a significant portion of the world’s limited mine resources are in developed or rising countries. For example, the share of mining in the country’s gross national product is 5 percent in the U.S., 4 percent in Germany, 3.7 percent in Canada, 6.5 percent in Australia, 22 percent in Russia, 8.5 percent in Chile, 6.5 percent in South Africa and 3 percent in Brazil. However, it is around 1 percent in Turkey. 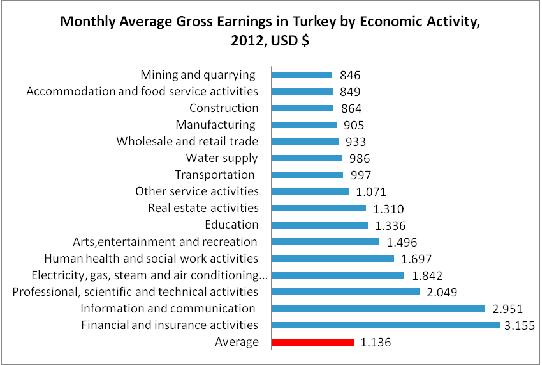 Turkey is an importer in coal and also an importer of metal ore, and it imports nearly $1 billion worth of them each year. When considered that the annual import is almost 250 billion dollars, this is not an important figure. Also, Turkey spends $1.2 billion annually for metal ore. On the other hand, its exports in metal ore and quarry products reach $3.5–4 billion annually. When one considers that overall annual exports reach $150 billion, this is not a big export item. Again, when crude oil and natural gas are excluded, Turkey is an exporting sector in mining with an annual net $1.5 billion.

After privatizations, the public share in mines went down significantly. Only 12 percent of the nearly 145,000 mine workers are publicly employed.

The wage of the miner, which is earned in high-risk circumstances, is low compared to other sectors.

According to a survey conducted by the Turkish Statistical Institute (TÜİK) on labor force costs, the mining labor force – which is generally provided from the rural region due to more mines being located there and because not many qualifications are needed for the job – is found to be the cheapest labor force.

In TÜİK’s data on monthly average costs and gross earnings, the average monthly gross earning of miners in 2012 was found to be 1,523 Turkish Liras ($846). Data also shows that miners’ wages were 25 percent lower than the average worker’s wage. In 2012, the monthly average gross earnings of Turkish workers was found to be 2,045 liras ($1,136). The most important factor in these low wages in the mining sector is the scarcity of trade unions. According to Labor and Social Security Ministry statistics, only 20 percent of the workers in the mining sector are members of a trade union.

With the rapid privatization in the sector, the number of workers belonging to a trade union also decreased rapidly. Employment in the sector decreased due to workers retiring after their mines were closed, and it also became quite difficult to organize the existing workers and gather them under a union. Flexible working methods, sub-contracting and the leasing system all contribute to working models that make it very difficult for workers to join a trade union.

Meanwhile, 2.3 percent of all workers who have been employed in the past 12 months in Turkey have experienced an occupational accident. However, when reviewed according to sectors, the rate of those who have had a job accident in the past year in the mining and quarrying sector is 10.4 percent, while in the electricity and gas sector it is 5.2 percent, and in the construction sector it is 4.3 percent. The fact that technology in the mining sector is not being updated is crucial to the mining sector coming last in occupational safety. The fact that coal extraction is conducted in galleries underground increases risks, while in regions such as Soma the fact that the coal seams burn also increases the risk. There have reportedly been debates in the Cabinet about whether to terminate coal production in places such as Soma. However, the Energy Ministry – which is aiming to reduce dependency on energy imports by focusing on local fuels – does not want to give up on coal, and is including coal in the packages of several electric power plant privatizations. Nevertheless, in the wake of the last major disaster, the private sector is expected to be extra careful.