In the first nine months of the year 2015, Turkey’s chronic illness or current account deficit was $25 billion. This deficit was $46 billion the entire year of 2014. For the whole year 2015, it looks as if it will be $42 billion.
It was not indeed certain structural transformations were that effective. Because the growth rate is low, the current account deficit also stays low. Investments that are the level of growth are at a very low level. When this is so, foreign currency spending on machinery and equipment is also low. With the foreign exchange rate rising by around 30 percent on average amid the Turkish Lira’s devaluation, import bills for Turkish companies paying in liras have increased. This has decreased imports. There are major drops in automobile, electronic and mobile phone imports. There are falls in bar gold imports, which were used as payment to Iran for natural gas imports. As a result, this decline in all foreign currency expenditures narrowed the current account deficit.

How is the deficit closed?

Growth, which is expected to barely reach 3 percent this year, also causes the current account deficit to decrease. The noteworthy aspect of the current account deficit is the financing of this deficit. While the current account deficit of nine months was $25 billion at the end of August, the financing of the deficit was not met through foreign resources inflow, but through reserves and “net error and omission,” which made eyes turn to “unregistered capital inflow” again. It is not a small amount; only $8 billion of the $25 billion deficit was paid with foreign capital inflow, the source of which was known. Of the rest, $13 billion was paid through “net error and omission,” and $4 billion through reserves. The “net error and omission,” which had a 52 percent share in the financing of the deficit, was indeed drawing attention. But the real chaos happened when the official title of this resource was put into colloquial terms in media and politics. 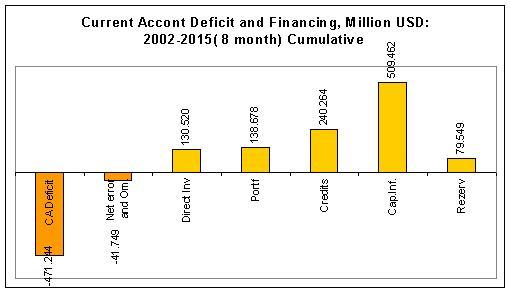 When this kind of capital inflow is called “unregistered inflow,” it is more likely to be understood as “money laundering and foreign currency coming from the crime economy.” For instance, daily Cumhuriyet’s headline on Nov. 14 was “Serious doubt in secret money.” The story said, “That rule has not changed: money inflow from unknown origins increases in every election campaign period. With two elections squeezed in one year, Turkey, in the first nine months of the year, had a 52 percent increase in money inflow of unknown origins compared to the same period last year, totaling $13.44 billion. This brings the same question to mind: Are election campaign expenditures financed by money without a known origin?”
Daily Cumhuriyet asked former finance minister and former head of BDDK Zekeriya Temizel where this money, which has been increasing since the Justice and Development Party (AKP) came to power in 2002, was coming from. The answer was, “This money may inflow because of the insecurities before elections; they may come because they love an environment when there is no monitoring and where prosecution does not take place; however, the fact that they increase during election campaign times brings to mind that they may be brought in for the financing of election expenditures.” Temizel said the origin of this money could be from criminal activities and that they can either enter the system in suitcases or through banks.

What is the truth?

An analysis covering the main items of the balance of payments between 2002 and the first nine months of 2015 shows that net error and omission or unregistered capital inflows are not that much of the total current account deficit and its financing. It also shows that it cannot be the sole indicator of black money in Turkey.

Calling the unnamed foreign currency inflow of about $3 billion annually “black money” may be good for propaganda but it doesn’t tell the truth. It also gives false information.

There is indeed some money laundering present in Turkey. It comes from the crime economy, primarily drug trafficking. But this is much, much higher than the $3 billion yearly and $42 billion in 14 years of “net error and omission” figures. Making these amounts out as this small and putting a figure on them would lead to the mistake of underestimating the real amount of black market money. The real black money may come through exports, imports, tourism inflow and foreign direct investment. If these items are classified as “registered” and “unregistered,” then they would leak into registered ones and not be noticed, thus becoming laundered…

Black money is disguised as direct investment, stock exchange investments and deposited money, and it is in amounts that may in reality be jaw-dropping. Just remember the gold deal of Riza Zarrab. The import of gold, its export, its transfer… Everything looked as if it was by the book but see what came under it…
Cheap politics routinely makes the same mistake by calling unnamed foreign currency inflow as “black money,” however, it only accounted for 8 percent of the country’s deficit in 14 years.

As a matter of fact, the high inflow of $13 billion in the first eight months of 2015 was related to the attractiveness of the Turkish Lira’s devaluation against the dollar and also due to the incentive granted by a government-introduced regulation in July. After this regulatory measure, money abroad was brought in and started being put in companies as cash capital. Because of this, the “error” increased $3.7 billion in August.

Related Posts
Hopes of growth pinned on indebted domestic market
Mustafa SÖNMEZ Hürriyet Daily News May 25 2013   The Turkish government wants more…
Losses of Turkey’s construction sector foisted on taxpayers (Al Monitor, May 6, 2019)
In times of economic crisis, the cost of recovery is often borne by taxpayers at the…
Umbrella upturns: Capital inflow to Turkey down 73 percent
MUSTAFA SÖNMEZ Hürriyet Daily News, January/18/2016 The results of the November 2015 balance of payments…