The results of the November 2015 balance of payments released last week have confirmed an ongoing trend: The foreign resource inflow that has been financing Turkey’s growth for 12-13 years dropped radically in 2015, and this could be considered a sign of a new era rather than a temporary trend. A new climate has gone into effect and the growth paradigm based on foreign resource inflow has actually come to an end.
However, on the same day, Deputy Prime Minister Mehmet Şimşek publicized the revised Medium-Term Program (OVP) 2016-2019 targets, which revealed that the new facts of the new era were not particularly recognized.

The balance of payment data which covers foreign currency movements of the Jan.-Nov., 2015, period show that the total amount of registered capital inflow to Turkey in the forms of direct investment, portfolio investment and other investments (loans and bank deposits) remained at $10.8 billion in the first 11 months.

However, the primary loss of blood was in foreign investments in the stock exchange. Let alone an increase in portfolio investments in the period from Jan.-Nov., 2015, there has been a drop of nearly $15 billion. While there was $19 billion in foreign resource inflow in the same period in 2014, there was a withdrawal of nearly $15 billion in 2015.

In other foreign inflow made up of loans and bank accounts, $16.3 billion arrived. It was the same amount in 2014. However, when these three items are added up, while the foreign inflow in Jan.-Nov., 2014, reached $40.4 billion, the same figure for 2015 remained at $10.8 billion. In other words, there was a drop of $29.6 billion, corresponding to a fall of 73 percent. This is obviously a sharp and dramatic drop.

Even if the 2015 deficit went down to $28 billion, how was it financed? The inflow of foreign currency was only $10.8 billion. It was met “from the pocket.” In other words, it was met through Turkish Central Bank reserves and the “net errors and omissions” of unknown sources. This was a first-time phenomenon. The foreign resource inflow was not adequate, only capable of meeting 39 percent of the deficit. Foreign currency sales from the reserve prevented the devaluation of the lira and the foreign currency that was “stashed” abroad was brought into the country. Thanks to them, the dollar exchange rate stayed at an average of 2.72 liras; 61 percent of the current account deficit was met with this kind of domestic resource that will hardly recur.

In previous years, financing from the reserve and “hidden foreign currency boxes” was never to this extent; foreign capital flow constituted at least 75 to 85 percent of capital flow. Even in the 2009 crisis, foreign resources met 77 percent of the deficit. Even in 2011 when the deficit was at its highest with $75 billion, there was a foreign resource inflow of $64 billion. In 2015 though, this rate fell down to 39 percent, for the first time.

The foreign capital flow to “emerging markets,” which Turkey is among, has slowed down since 2014. 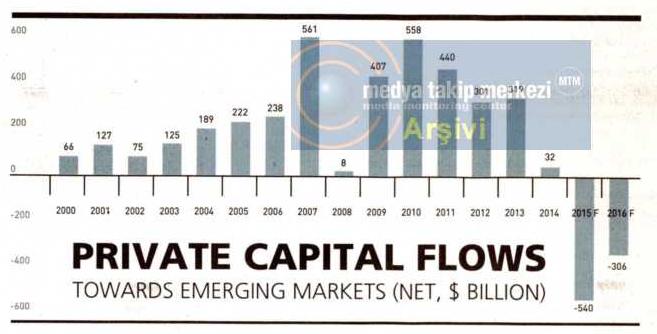 Moreover, the umbrella upturned in countries such as Russia, Brazil, South Africa and Mexico. Data from the Institute of International Finance (IIF) shows that the foreign capital inflow which was regularly flowing in the period between 2003 and 2007 came to a halt in 2008 and with the effect of the shrinkage in central countries and started to flow again into emerging countries. However, with the U.S. Central Bank’s (Fed) signaling of rate increases, this temporarily parked foreign capital turned its face to the U.S. The money inflow to emerging countries which was down to $32 billion in 2014 turned into a withdrawal of $540 billion in 2015.

The IIF foresees that this capital withdrawal will continue in 2016 and reach $306 billion. This is not good news for Turkey and all emerging countries and it means that loss of value of local currencies against the dollar will continue. A more expensive dollar means less importation and less growth for these countries.
Well, do the government and economy management look as if they have accepted this reality? Not so much. The OVP targets released by Şimşek do not seem to be standing at that point.

In the revised OVP, inflation was more realistic but the exchange rate was surreal… Inflation in 2016 is estimated to be 7.5 percent in the revised program.

In October 2015, in the first OVP, the dollar estimate for 2016 was 3.12 liras. What positive developments have happened since that day that the estimate was pulled down by 12 kuruş? On the contrary, a dozen risks have emerged, shunning the foreign investor.

The growth target is also “too pink” in the OVP. The government revised the initial 3 percent growth for 2015 to 4 percent. This is quite ambitious. If Turkey’s economy grew 5.6 percent in the last quarter, then this target will be met.

The classic 4 percent growth target for 2016 has been changed to 4.5 percent.

Some believe it would not be surprising if growth reached 4.5 percent in 2016 with the additional raises in minimum wage and retired pensions fueling demand, with growth based on the domestic market seeming possible. But will this be possible with lower than expected foreign inflow and the dollar exchange rate well above 3 liras? Would the Central Bank continue to not interfere with interest rates? If interest rates increase, what will happen to growth? These are the questions in many minds…

Related Posts
Fed bound for ‘moderate increase’
Mustafa Sönmez - Hürriyet Daily News - March/23/2015 For long years, the world economic literature…
Qatari money increasingly important for Turkey(Al-Monitor, May 31,2017)
Summary  Growing ties with Qatar have become a hallmark of Turkish regional policy under the…
Turkey’s ‘megaprojects’ off to disappointing start(Al-Monitor, March 29,2017)
Summary In an outcome that many have long feared, Turkey’s “megaprojects” are underperforming, meaning the…