The  Greek people have said “Oxi – No” to the bitter pill of the European Union’s program of belt-tightening.

Greeks, who have been tightening their belts for years, even though they know they will go through even tougher days, said a strong “No” to the EU’s conditions for assistance. The opposition leader Antonis Samaras, who was promoting “Yes,” has resigned. Renegotiations have started officially and unofficially. If a solution is not found, it is even possible that  Greece will leave the euro, and many are wondering what reaction the troika will have for this negative answer. However, it is certain that this negative answer will act like a signal flare for opponents of austerity in the Mediterranean basin, such as those with similar issues like Spain, Portugal, Italy and even France.

All of these countries are under pressure from the International Monetary Fund and the European Central Bank (ECB).

In the eyes of the foreign investor, Turkey and the other Mediterranean EU countries are categorized as “vulnerable countries,” but their risks and the organs responsible are different.

The fragility of the Mediterranean partners of the EU is due to public finance. The European Commission and the ECB are also trying to overcome the issue, sometime with the IMF stepping in. But Turkey’s fragility is not because of the public; it stems from the private sector. If the bottleneck is not rectified, then the IMF will step in.

During the 2000 and 2001 crisis, Turkey experienced what the Mediterranean countries are going through. Turkey said “yes” to whatGreece  said “no” and overcame the problem at a heavy social and political price. 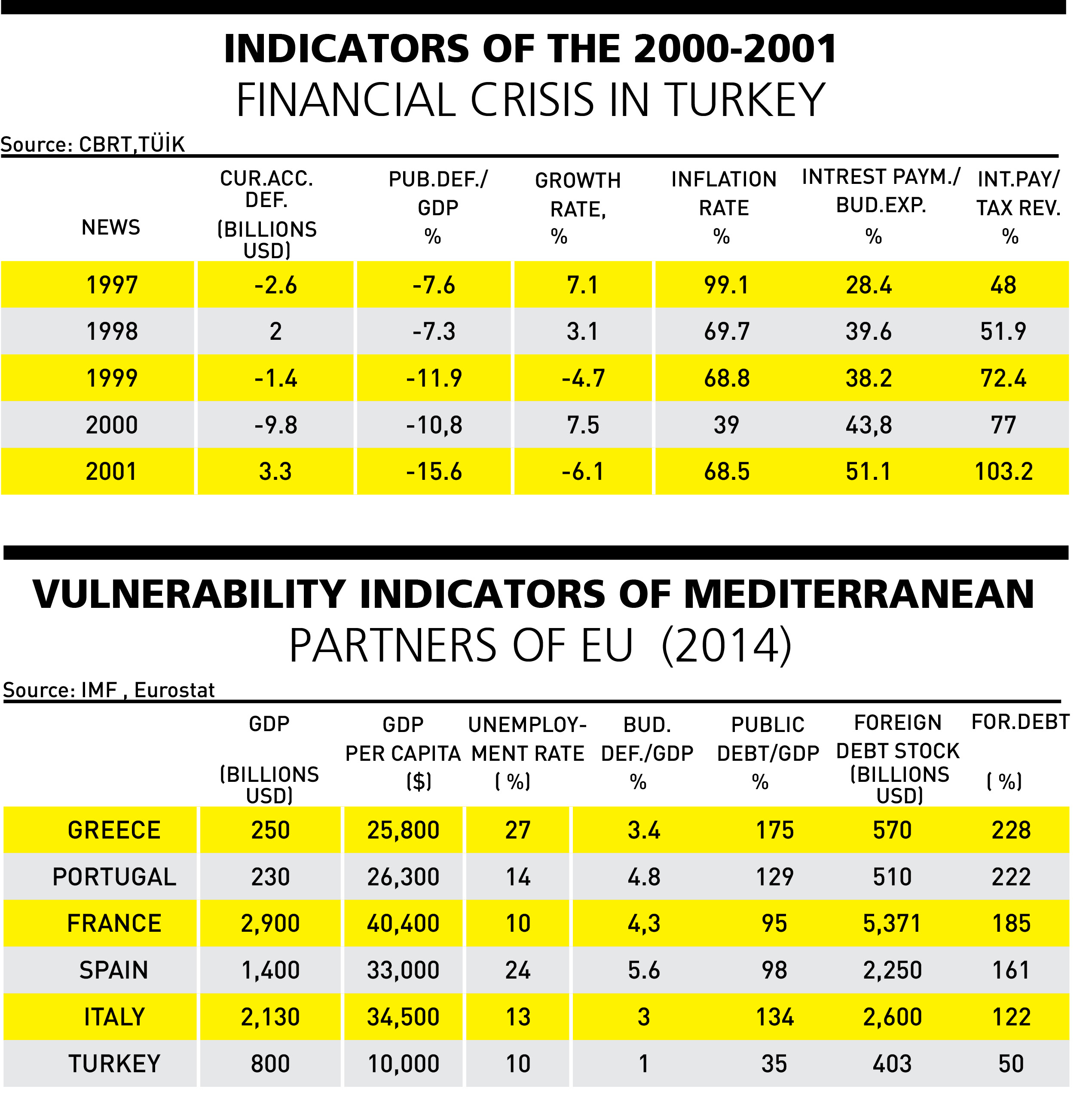 Cracks  in the basin

All eyes are focused on Greece. How will it cope with huge debts? How will it cope with an unemployment rate of almost 60 percent of for youth and an average of 27 percent? But it is not only Greece that has problems. Maybe it is a country that has the most striking indicators, but what keeps the focus on this country is its fight with the troika, not succumbing to its conditions.

It is known that when the 2008-2009 global crisis hit the EU, it was the southern countries on the Mediterranean that were hit the worst. The global crisis caused all the vulnerabilities in Spain, Portugal and Italy and even France, as well as Greece, to surface. Fighting the crisis with public funds increased the existing public deficits, rapidly increasing public debts, making the public finance crisis their common problem.

The biggest debtor in all these countries, including France, is the public. Thus operations all focus on curbing the public budget deficit, forcing the public debts to shrink. While these are being conducted, public current expenditures and investments and their possible contributions to growth have decreased, shrinking domestic demand.

It is not easy to compete in external markets with the euro. The euro climate almost obstructs the competitive capacity of these countries. They have lost their ability to devaluate their own currencies to gain competitive power after having switched to the euro. They cannot compete with Germany, Austria and the Netherlands over the euro, especially in high added value products. They are forced to medium and low added value production, to the role given to them in the EU domestic division of labor.

Turkey experienced the public finance crisis of the Mediterranean basin countries during the 2000-2001 crisis. The IMF  imposed the bitter pill on Turkey, the one Greece and others are now resisting. The crisis was overcome at a huge political and social price. The huge devaluation of the Turkish Lira helped in exports.

At the beginning of February 2001, with the lira’s value plummeting, the crisis came. With the Feb. 28, 1997, post-modern coup, while the Islamist Necmettin Erbakan government and its successor, the Justice and Development Party (AKP), were saved from the bitter pill, the previous coalition governments were the administrators and victims of this terrible conjuncture. The coalition governments formed between 1998 and 2002 were the ones to conduct all these unpleasant operations. The masses were left poor and unemployed. They paid for the measures in the 2002 elections in failing to clear the election threshold. While they were paying the price, the breakaway from the Welfare Party (RP), the neoliberal AKP formed by Abdullah Gül and Recep Tayyip Erdoğan, enjoyed the fruits of their predecessors’ labors: public finance, the infrastructure for privatization and well-functioning relations with the IMF  inherited from their predecessors.

The world situation from 2002 to 2007 also helped this rectified economy. AKP governments were in power during days of abundant liquidity and resources poured in, boosting growth. The masses who opted for the AKP after the 2001 crisis, when there was no serious alternative, voted for the AKP for two more terms. The AKP, on the other hand, with this dream climate, started building a regime.

The many sources of income pouring in after 2002 turned Turkey’s economy into one that was focused on the internal market and engaged in construction without a master plan, while also spending foreign exchange without making gains. Turkey’s stock of foreign debt climbed to over 50 percent of national income to $400 billion. Of the debts, two-thirds belonged to the private sector, while nearly 40 percent were short-term.

The fragility in the Turkish economy today stems from the difficulties in ending the dependency on foreign resources and debt obligations. An important aspect of this fragility is the fact that 40 percent of the total debts are in 12-month terms, which slows down the flow of foreign capital and hinders Turkey from fulfilling its obligations. There is no problem in the public deficit, but the private sector is unable to invest while Turkey has had either difficulties in renewing debts or has been forced to shoulder heavy losses by paying its debt installments at higher rates. Moreover, the ECB does not function like a lifesaver in the way that the European Commission does.

In the event of problems, the only door to knock on is that of the IMF – but its prescription will be decidedly unpalatable.