The Economic Confidence Index holds the pulse of consumers and producers in different sectors with 20 different variables. It measures the confidence in economy policies applied and the expectations for the future of entrepreneurs in the manufacturing industry, construction, service and business sectors, as well as all kinds of consumers. Unfortunately, the signals are not good.

Expectation surveys are also used as an indicator related to the political pulse. By looking at this index, analysts say the confidence and support for the ruling Justice and Development Party (AKP) have been decreasing recently. This composite index, called the Economic Confidence Index, has been measured since the beginning of 2012, and the curve has been downward since the fall of 2013
Especially in the interim period during and after the Dec. 17 and 25, 2013, graft operations until the March 31, 2014 local elections, the confidence index dropped to a great extent, with both consumers and producers’ expectations for the future declining rapidly. After the local elections, even though there were partial rises, the index fluctuated; since the beginning of 2015, however, it has gone down.

The method of the index

The Economic Confidence Index, which takes the pulse of both the consumer and the producer, is conducted in cooperation between the Turkish Statistical Institute (TÜİK) and the Central Bank. It contains five different components, each of which has subcomponents. 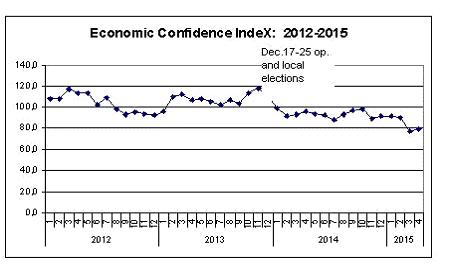 When the economic confidence index is calculated, all the components are seasonally adjusted. In consumer confidence indexes, with the assumption that expectations of consumers would not change according to seasons, there are no seasonal adjustments.

Even though confidence indexes increased in April, the numbers are both behind the figures for January and the one 12 months ago. It looks as if confidence has eroded to a serious extent.

According to TÜİK data, the economic confidence index has decreased 15 percent in the past 12 months, and the index went down from 94 to 79.7 percent.

The erosion in the economic confidence index was especially concentrated in the months of 2015. The index value, which was 91.9 in December 2014, fell to 79.7 percent in April, a 13.2 percent decline.

From December 2014 to April 2015, the decline in consumer confidence was 14 percent, constituting the deepest fall, while the decreases in confidence in the real sector and retail sector reached 5 percent. Confidence in construction went down 2.6 percent; the only index to increase was the service sector at 1.7 percent.

Pulse of the consumer

The most significant component is the Consumer Confidence Index among general expectations. In this survey, consumers are primarily questioned about their individual financial expectations and whether they expect an increase in income. Other questions asked are the financial situation of the household in the past 12 months, as well as their expectations for the next 12 month, a financial evaluation for the household and the possibility of them taking out loans in the next three months.

In this questionnaire, the consumer is also asked about their opinion about the general situation of the economy. Also, views on unemployment and savings in the next month are questioned. Consumer confidence at the beginning of 2012 was 79 in the index, the highest in recent years. Even though it fluctuated later, it was never below 75. In 2013 July it was close to 79.

However, in the subsequent period, the index constantly went down. The announcement by the U.S. Fed to abandon its loose monetary policies and the rapid valuation of the dollar from that date on have had a strong impact on the issue.

At the same time, the graft operations of Dec. 17 and 25, which created a major political crisis toward the end of 2013 and were followed by the tense atmosphere of the March 30, 2014, local elections, caused major declines in the confidence index and consumer expectations. With the relative stability experienced after the local elections, the consumer confidence rose to 76 once more.

However, with the developments that strengthened the dollar in following months and the rapid devaluation of the Turkish Lira, together with the non-recoveries in macroeconomic indicators such as growth, unemployment, inflation and the budget, consumer expectations for the future went down. The consumer index that fell below 70 in November 2014 has not exceeded 70 since then. The year 2015 is especially set to be a pessimistic one for the consumer.

Expectations of the industrialist

The Central Bank’s real sector confidence index has been going down since September 2014. It was near 110 that month and despite a relative recovery, it only reached 103 in April 2015, a decline of seven points in six months.

The trend in the confidence of firms and consumers is downward and it is not known yet whether the fall will continue in the second half of the year. The June 7 elections is the main factor in the “wait and see” mode of consumers and companies. Important expenditures and investment decisions have been delayed until after this date.

What kind of a government will emerge from the elections is not easy to guess. If the AKP does not win enough seats to form the government alone, what kind of a coalition will be formed and what kind of an economic program will be adopted are not known; because of this, important decisions are being postponed by both local entrepreneurs and foreign investors.

Another important decision is the Fed’s interest rate increases. Will they come in June and, if so, by how much? The level of the interest rate will define the fate of the lira against the dollar. The lira has been the champion of losers against the dollar in 2015 among all significant currencies. Its devaluation affects several macro equilibriums from growth to inflation, employment and budget deficit; thus consumers and companies want to see ahead more clearly and monitor June very carefully.