The Turkish economy, after 2002, by using the foreign capital inflow of an annual average of $40 billion, was able to grow 4.5 percent annually. With this capital inflow, Turkey’s imports and exports also grew rapidly. So much so that the imports, which were $40 billion in 2000, reached $242 billion at the end of 2014. This corresponds to an increase of 505 percent. Imports, which were around 15 percent of the national income in 2000, went up to 30 percent of the national income at the end of 2014. This corresponds to a nearly 100 percent increase in 15 years.

Turkey’s trade with the world economy, even only in the last five years, increased 33 percent from $300 billion to become $400 billion. While foreign trade constituted 41 percent of the national income, in 2014 this figure went up to 50 percent. The average of the past five years is 47.7 percent. Even this shows how much a huge integration has been experienced in a short time. The averages of the past four years, the period from 2010 to 2014, have incredible indicators. Turkey, in these four years, has had $231 billion of importation against $142 billion exports; in other words, the foreign currency gained from exportations was only able to cover 61 percent of import expenditures. As an average, Turkey was a net importer of $89 billion every year, in other words, had a foreign trade gap of $89 billion each year. 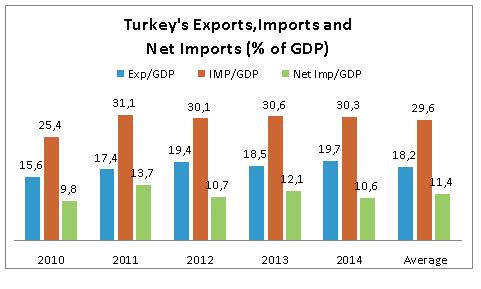 Taking the average of the past five years, the annual increase in exports is 9 percent while the annual increase in imports is 12 percent. In other terms, while exports rise by three, imports rise by four. The average increase of the past five years in the foreign trade gap is 22 percent. Again, as the five year average, the rate of exports covering imports is 61 percent. This is the most important indicator of dependency.

The backbone of industry, which is exports, has constituted an average of 18.2 percent of the national income in the period 2010-2014. However, imports are more and are nearing 30 percent of the national income. This means that Turkey’s national income has a foreign trade gap of around 11.4 percent every year, which is quite high. This is a negative feature that makes Turkey quite fragile.  In every sector, there is both exportation and importation. While it varies from sector to sector, there is a distinction between sectors that have strong export power and those that do not.

As a result, when growing foreign trade gaps cannot be closed with foreign currency inflow through the service sector, tourism, etc., then giant current account deficits emerge that are in the 7-10 percent corridor of the national income. And this means more dependency on external resource inflow and in order to provide this inflow, succumbing to several unwanted policies.

An analysis of the 2010-2014 period shows that net exporter or net foreign currency earner sectors constitute 12 of the 29 sub-sectors. In this analysis period, the net exporter sectors exported nearly $64 billion as an annual average, while importing $31 billion. The imports of these sectors made up 49 percent of their exports.

Among the net exporter top 10 sectors, the apparel sector constituted nearly 30 percent of the net exports in the past five years; textile has a share of nearly 23 percent. Thus, these two sub-sectors that are complementing each other have a share of 53 percent in net exports. When you add food, which nearly has a 14 percent share to this, these three traditional branches that have a low added value constitute two-thirds of Turkey’s net exports. It has been like this for years and shows the skidding in industry.

With the setup of “low foreign exchange rate – high interest rate,” they were able to maintain the capital inflow for more than 10 years, but at mid-2013 due to the developments especially in the U.S., the umbrella of the foreign exchange rate upturned. When political and geopolitical risks were added to the increasing economic risks, capital inflow decreased and foreign exchange rate hiked. The dollar exchange rate, which was 1.80 Turkish Liras in 2012, went up to around 1.90 liras in 2013 and closed the year 2014 with 2.20 liras. The depreciation of the lira over 15 percent in especially 2014, even though it relatively decreased imports, did not bring the expected increase in exports. Despite the 15 percent increase in the dollar exchange rate, the increase in exports was below 4 percent. The same year imports decreased around 4 percent.

The course of the exchange rate has a vital importance for indebted establishments that had foreign debts reaching $400 billion, out of which 30 percent were short term loans. The private sector used two-thirds of this debt. It is of huge importance for banks and companies that the dollar exchange rate exceeded 2.50 liras at mid-February. Huge foreign exchange losses will negatively affect many industrial firms.

Related Posts
Can Erdogan push for his ‘crazy project’ amid economic crisis?(Al Monitor, July 22, 2020)
Even though no tender date has been set for the construction of Turkey’s controversial Canal…
In Turkey, high inflation drives home sales(Al Monitor, Feb.24,2022)
Home prices in Turkey have seen a staggering uptick, fueled by a combination of factors,…
Foreign exchange rate and wage pressure on companies
Mustafa Sönmez - Hürriyet Daily News, December/21/2015 The huge value losses of the Turkish Lira against…