The number of people who work fewer than 40 hours a week, but would work more if they could find work hiked to 595,000 in August by some 50 pct increase from the same month in 2012.

The Turkish Statistical Institute (TÜİK) reveals “official unemployment rates” in the middle of each month for the prior two months. The agency announced the rate for August 2013 as
9.8 percent, which is one point higher than the same period of the previous year.

The number of unemployed people increased to 2.8 million this August from 2.4 million last August. This means around 400,000 people became a part of “officially” jobless people. This rate is one point lower than the EU average and very close to the figures in Hungary, Slovenia and Poland.

The unemployment rates of more than 27-28 percent in Spain and Greece are extremely high,
to be sure. 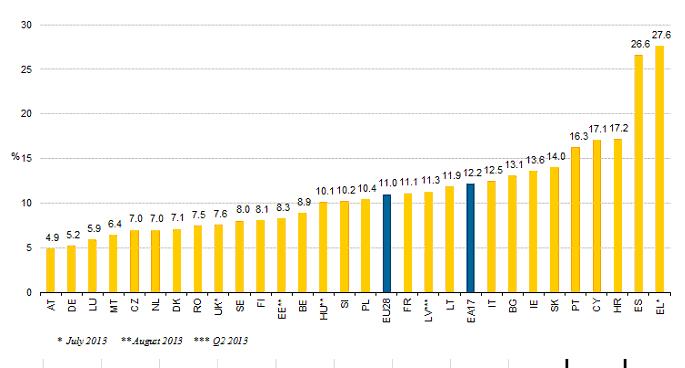 Here, the main problem is semi-workers. The ILO asks from its member countries to declare their “flexible employment” or “discouraged jobless” rate covering people who are jobless, but do not even bother seeking jobs because they don’t believe they’ll be able to find work, in a separate group from the “official employment” rate. In this vein, people who “believe there is no job post in the region where they live or believe there is no job for themselves or do not know how to seek jobs, but say they are ready to work” are not seen as “officially jobless.”

These people are called the “discouraged ones.” They are actually unemployed, but are tired of seeking jobs with so few prospects. Some 2.1 million people live like that in Turkey, around three-fourths of the official jobless rate. If they are included in the equation, the number of jobless people surpasses 4.9 million in Turkey. There is more.

In addition to official jobless people and uncounted unemployed people, there is another group: “underemployed people” who are “barely working.” The number of people who work fewer than 40 hours a week, but would work more if they could find jobs increased to 595,000 in August from around 400,000 compared to the same month of 2012.

This means the number of people who could find jobs requiring less than 40 hours a week almost doubled in one year. There is also another group: “Temporary workers,” who work temporarily, but seek a permanent job as they cannot afford to live their lives with temporary jobs. The number of all these underemployed people surpassed 1.076 million in August, increasing by 44 percent from the same month in 2012. They should also be counted as real unemployed people. 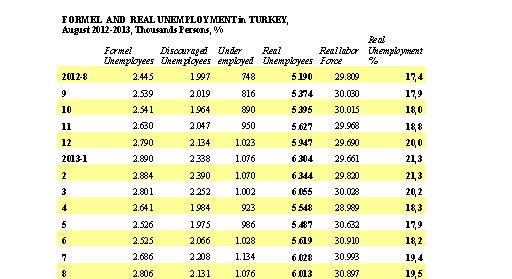 Source:TURKSTAT
The number of officially unemployed people, discouraged workers and temporary workers exceeds 6 million in Turkey. This means there are over 6 million real unemployed people, creating an unemployment rate of 20 percent. The official jobless rate is around 10 percent in the EU, the same as Turkey’s official rate. The real rate of unemployment is also over 18-20 percent in the EU as well.

Seasonal job opportunities in agricultural,tourism and construction sectors begin to decrease at the beginning of every August, pushing unemployment rates up in the following months. This year will not be an exception.