The U.S. will make the plane ascend with the interest rate increases it will introduce, after abandoning the loose monetary policies it adopted against the crisis and the accompanying monetary regime.
The EU is not at the same place, which does not allow the world to synchronize. How the re-growth of the U.S. will affect other regions is waited for impatiently.

The growth in the U.S. has also activated foreign investors, who had temporarily parked in countries such as Turkey before turning towards the U.S., while the world’s capital is set to take new positions. This means a sudden emptiness for those “emerging countries” that have grown their economies with foreign money.

With the withdrawal of foreign investors, local currencies lost value sharply against the dollar and are still losing. When interest rates were increased to curb the sharp falls, the economy froze between the high exchange rate and the high interest rate; growth rates neared zero or were limited to 1 to 2 percent.

Turkey has been under the influence of this since mid-2013. In Turkey, where political and geopolitical risks are added to its economic risks, the umbrella has overturned. The water does not run its course anymore; both the amount of water has decreased and the riverbed itself has become problematic. The year 2014 gave enough of an indication that it is time to move away from this set-up to another place. Let us see if a search for the new place will begin in 2015. 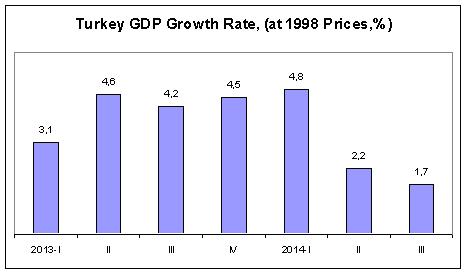 Turkey’s growth is likely to be around 2.5 percent in 2014, missing the target of 3.3 percent. This has developed in parallel with the decrease in capital inflow. In the first 10 months of 2014, the amount of inflowing capital was $31.6 billion – down 40 percent from the same period in 2013.

The current account deficit in total between January and October 2014 was $33 billion. The $31.6 billion of foreign capital inflow was not enough to fill the deficit, so unregistered – in other words net errors and capital omissions – inflows completed it.

The changing of the financial climate, especially in the U.S., has brought about the slowing of the economy in emerging countries, including Turkey.

Turkey’s economy in the third quarter of 2014 was not able to meet its 3 percent target and grew only 1.7 percent. This was the lowest quarterly growth of the past two years.

The drop in consumption, which appears as stagnation in the housing, automotive and white goods sectors, has negatively affected growth. The 4 percent figure, which is the growth target for 2015, is now being considered optimistic. Because of the increase of interest rates in the U.S. and the continuation of the interest rate-exchange rate spiral which is pulling growth down, the growth in 2015 is expected to actually be around 2 percent.

While economic growth decreases, in other words while production and investments fall, unemployment climbs. 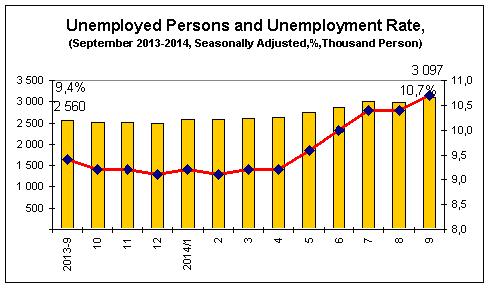 When economic growth fell below 3 percent, then tax income also had a low course and its increase stayed at around 8 percent. This corresponds to 1 point below inflation. In other words, let alone an increase in taxes, they went back 1 point in real terms. On the other hand, budget expenditures increased 11 percent, which are 2 points above inflation. As a result, the budget, which had a deficit of 7 billion Turkish Liras in the first 10 months of last year, in the same period this year had a deficit of 15 billion liras, with an increase of 95 percent.

Personnel expenses increased nearly 15 percent to become 94 billion liras, which were 6 points above inflation. The increase in the number of public employees has been the biggest factor in this rise.

A striking increase was experienced in budget expenditures in the premiums of the Social Security Institution (SGK) and its deficit financing items. The SGK took the biggest share of the central budget’s current transfers. From the 363 billion liras of expenditures of the budget in the first 10 months, 22 percent was allocated to its social security deficits and financing.”

With the detainment of personnel close to the Fethullah Gülen Community on Dec. 14, the political risk rose and together with other risks turned the markets upside down. Fluctuations in emerging markets, first and foremost in Russia, and the expectation of an increase of interest rates from the FED hit the markets big time.

Last week, the dollar rose to the historic level of 2.41 liras, but transactions continued at a lower rate later. The euro also rose with the dollar and exceeded the 3 lira level, then went below 3 lira.

If circumstances force a new raise of the interest rate, this would mean that 2015 will be a new stagnation and shrinking year for Turkey. It should not be too difficult to predict that such a bitter economic climate in a year when general elections will be held would upset certain voters.

Related Posts
Why Turkey’s new economic program failed to impress( Al-Monitor, Sept.26 2018)
ARTICLE SUMMARY The Turkish government’s hallmark rejection of self-criticism affects consistency and realism in its…
An unpleasant first half for the tourism sector
Mustafa Sönmez - Hürriyet Daily News,  July/06/2015 Tourism, the most important sector that earns foreign…
Clouds gather over Turkish-German economic ties (Al-Monitor, August 1,2017)
SUMMARY Exasperated over Turkey’s disregard for the rule of law and its arrest of German…