With the crude oil barrel price falling as low as $80, the benefits that energy-importer Turkey will enjoy are being exaggerated, as the country’s overall energy bill is climbing rapidly.
The average world price of crude oil per barrel, which was around $112, has fallen to around $70 within a couple of months, and questions such as “Why did this happen, who will win, who will lose?” have started to be asked more frequently. In the OPEC meeting held the other week, no decision came out about restricting production to curb the fall in prices. Immediately after the meeting, the price went down to $68, its lowest level in the past four and a half years. Talk is that oil barrel prices may even go below $60 in the first half of 2015. 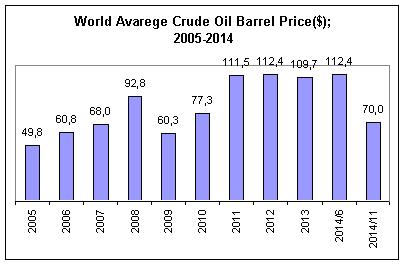 One scenario for why the price of oil has dropped is as follows: “Against the United States’ energy investments, this is the defense of the Arab world.” The U.S. oil industry’s initiatives in areas such as fracking, hydraulic-fracking and tar sand oil extraction are causing concern for oil exporters. At the top of the concerned countries are oil producers and exporters such as Saudi Arabia and Gulf countries, the economies and orders of which are based on the U.S.’ dependency on oil. Developments force them to not only take defensive measures, but also counterattack.

While the U.S. was importing 60 percent of its energy consumption in 2005, today this rate has gone down to 21 percent. Economic shrinkage is also effective in this drop, but the main reason is that the U.S. has increased its energy production. With new oil fields and new techniques, the U.S. has increased its daily production of petroleum liquids to 7.5 million barrels. In 2020, the production is expected to reach 14.2 million barrels. In this case, U.S. production will exceed the production of Saudi Arabia and Russia. These developments affect the equilibrium of the energy market.

Saudi Arabia and Gulf countries continue to lower prices to protect their markets. An answer to the question, “But to what extent?” is as follows:

The decision-making countries in OPEC are defending themselves by lowering the price of crude oil below $80 per barrel, which is considered to be the “break-even price” of American companies that operate in hydraulic-fracking. In other words, it is the limit for them to continue production profitably and exporters will continue to lower prices.

Associating the price fall with political motivations is the second scenario that attempts to explain the sharp fall in oil prices. According to this scenario, the U.S. and Saudi Arabia-Gulf countries are lowering oil prices to put pressure on Russia and Iran, which have taken the role of global and regional players. It is being argued that by lowering prices, a blow is made to their most important economic resource: oil.

Russia has lost nearly $100 billion this year because of oil prices; its economic growth, for this reason, is not expected to exceed 0.5 percent.

Meanwhile, this move by the U.S. and its allies is highly beneficial to energy-addicted countries such as Japan and China.

At 18 percent, the trade of fossil fuels accounts for a significant amount of world trade volume. According to World Trade Organization (WTO) data, these commodities have a more crucial importance in certain regions. For instance, in 2011, global exports reached more than $17 trillion, of which energy products accounted for more than $3 trillion, a share of 17.8 percent.

It is apparent that regionally, the Middle East, CIS and Africa, which obtain between 55 and 66 percent of their income from energy, will be hit by the fall in oil prices. Not every country in the Middle East will be hurt equally. Saudi Arabia and some of the Gulf States are resilient to this decrease, but the same does not go for Iran and Iraq. It is a reality that Russia has taken a heavy blow because of the fall in energy prices.

It would be best to take a look at wealthy countries and country groups to see how they would be affected by the fall in energy prices. The European Union’s energy import bill for 2011 exceeded $992 billion. The EU has an exportation of $451 billion. In the end, the EU is a net importer of energy worth $541 billion.

The U.S.’ annual energy import bill is $464 billion. But it also has an annual exportation of nearly $130 billion. It is a net energy importer of $330 billion annually.

The U.S. obtains 23 percent of its energy imports from Canada and about 10 percent from Mexico. It also imports 16.5 percent of its energy from both Africa and the Middle East. Russia has a nearly 6 percent share in the U.S. market. The U.S.’ annual energy bill of around $300 will indeed decrease with the drop in prices.

Two powers that will be positively affected by the price fall are Japan and China. Both of these two giants import energy worth $275 billion every year. They will probably benefit from price falls with low inflation, high growth and a strengthened current account balance.

On the other hand, with the crude oil barrel price falling as low as $80, the benefits energy-importer Turkey will enjoy from this are being presented in an exaggerated fashion. Turkey’s crude oil and natural gas consumption has rapidly increased over the past few years and in association with world price movements, the bill which was $8 billion in 2003, became $36 billion in 2013. The total energy bill combined with coal and other energy imports climbed to $54 billion in 2013, and its share in total imports to 21.5 percent. Of total imports, the share of crude oil and natural gas imports rose to 14 percent in 2013, after coming in at 11 percent in 2003.

In the period between 2003 and 2014, Turkey’s average crude oil bill has been $11 billion annually and its natural gas bill $13 billion, accounting for an average total of $24 billion annually. This corresponds to an average of 13 percent of Turkey’s imports yearly.

According to Turkish Statistical Institute (TÜİK) data, in 2013, when the crude oil barrel price was $110, Turkey’s crude oil and natural gas bill was $36 billion and it had a 14 percent share of the $252 billion total imports.

In the first nine months of 2014, the bill for crude oil and natural gas has reached $25 billion, with the average crude oil barrel price being $107 during the first nine months of the year. By the end of 2014, the bill is expected to be $32 billion. This would mean a decrease of only $4 billion in the oil-natural gas bill, even at the expected growth performance of 3 percent.

Despite this, when it comes to the consumer, there is no question of a decrease in gasoline-diesel, natural gas or electricity bills. Electricity and natural gas prices were increased by 9 percent at the beginning of October.

There is no decrease in gasoline and diesel prices to the extent experienced in the world because of the concern in Turkey that the indirect taxes collected over petroleum products would decrease.