Especially in recent months, there has been a tangible fall in house sales. Loss of appetite in the usage of home loans most scares the contractors who are left with their stocks.

Housing construction has been a significant tool in the rise of the Justice and Development Party (AKP) government. In the past 10 odd years, the AKP has made major leaps with housing investments. First of all, it took initiative through Turkey’s Housing Development Administration (TOKİ). They removed the General Directorate of Plot Office, which was managing public land, and TOKİ was put in charge of public plots, which created an incredible opportunity.

First, with a model based on sharing, it opened high-value public lands to major contractors. In Istanbul’s Ataşehir, Maslak, Bahçeşehir and several other preferable districts, relatively luxury construction was carried out by major contractors such as Ağoğlu, Varyap, Aşçıoğlu and Torun, building thousands of units within the framework of this model. The resource obtained through this was channeled into several investments in Anatolia, ones the lower-middle class can afford.

The AKP, through the municipalities it administrates, used its development authority liberally. Any kind of construction investment in Istanbul, which is trying to be made a global city, became more profitable than any other sector for local and international investors, with foreign capital flowing from abroad also concentrating on construction.

Credit was transferred to consumers as housing loans, as well as to the contractors; the usage of housing loans increased rapidly, especially after 2009. Thus, a wheel of housing-oriented savings started rolling. The construction of offices and hotels accompanied housing. The public sector, urban infrastructure investments, investments in transportation, airport and public infrastructure construction nurtured the sector.

The construction-oriented accumulation is proceeding on a domestic market path where it does not earn any foreign currency; on the contrary, it causes the spending of foreign currency. The foreign exchange deficit is getting in the way, in other words, the current accounts deficit has reached 8 percent of the national income… The savings process is not proceeding smoothly; it is malfunctioning. 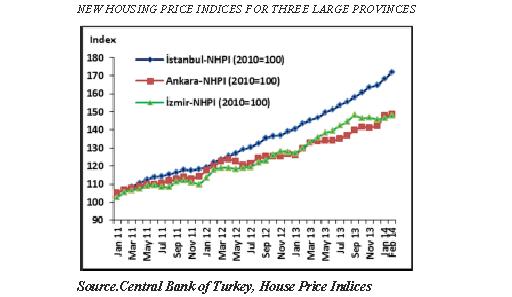 The housing-oriented construction has also left a hump behind: the inflated prices… As the Istanbul’s profits were polished with the help of the media and the fact that alternative investment fields, especially with the interest yields low, it has fueled the demand for housing and prices have soared.

The Central Bank issues statistics on this field and publishes a housing price index each month. While doing so, it also categorizes housing prices according to provinces and regions with the old and new prices. Its latest statistics belong to February 2014 and the scene emerging is scary. It was revealed that during the period between February 2013 and February 2014, new housing prices in Istanbul have increased 20 percent. In the same period, the increase in Ankara has been 15 percent and in İzmir, 14 percent. Well, what about the consumer price index (CPI), in other words, the average inflation? It is 8 percent…

Therefore, in only the past year, there has been an expansion in housing prices well above the inflation. If you take the year 2010 as a basis (=100), then the balloon becomes quite visible. In the period between February 2010 and 2014, the increase in housing prices in Istanbul is 80 percent, while the increase in inflation has been 33 percent. The difference in between is outstanding.

The balloon is also valid for office prices. Another indication of this ballooning is that the expansion seen in property prices cannot be seen in rent rates. Each year, while the CPI increases with an average of 7 to 8 percent, the increase in renting rates remains around 4 to 5 percent. Rent, in its essence, is the selling of the unit in slices, actually. While the price of the unit is increasing 20 percent, the sliced price (rent increase) stays at 5 percent; thus, this indicates that the price of the unit has unpleasantly soared.

The abnormal increases in housing prices have shown its effect on sales. According to the Turkish Statistical Institute (TÜİK), the decrease in sales in the period between January and April has been 8 percent compared to the same period in 2013. In Turkey, in the first four months of 2014, a total of 341,000 houses were sold nationwide. Sales have fallen approximately 28,000 units compared to the same period last year. 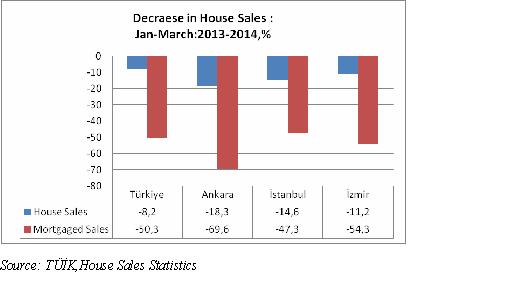 Istanbul has a share of 20 percent in housing sales and Istanbul’s sales have dropped 13 percent. While the nearly 28,000 less houses were sold in the first four months of the current year, 10,000 less units were sold in Istanbul, 7,207 in Ankara and 2,403 in İzmir.

According to the TÜİK house sales statistics of the first four months, there has been an 8 percent decline, while the decline in sales with loans (mortgage) have reached 50 percent. In the period between January 2013 and April 2013, out of every 100 units sold, 42 of them were bought with credit, this year this ratio has gone back to 30 percent.

In the first four months of 2013, in Istanbul, about 80,000 houses were sold. This figure in the 2014 January-April period stayed under 70,000, decreasing almost 15 percent. When the sales are reviewed from the loans angle, while 37,000 units were sold with loans in the first four months of 2013, this year the figure has fallen to 25,000. This means a decline of 47 percent in credited sales.

Buying houses with house loans has shown more dramatic declines in Ankara. In the first four months of this year, housing sales went back 18 percent in Ankara compared to 2013 and the decline in mortgaged sales was nearly 70 percent. While 22,000 houses were sold with loans in the January-April period in 2013, in the same period this year, the figure fell down to 13,000; and this ratio means a decline of 70 percent.

Especially in recent months, there has been a tangible fall in house sales. Loss of appetite in the usage of home loans most scares the contractors who are left with their stocks. The climb in the dollar exchange rate has been effective in this, as well as the addition of the political risk that came with the Dec. 17, 2013 operations.

With the response to the increasing foreign exchange rate with increases in interest rates and the reflection of this in loan prices, the market entered recession; the demand for home loans fell rapidly.

Housing investors are pressuring the prime minister particularly to lower the interest rates and the head of the Central Bank… However, when inflation is navigating toward double-digits, it is obvious that lowering the interest rates will have very serious consequences.