Although Turkey is one of the hottest tourism spots and attracting around 35 million foreign tourists in a year, its tourism income per tourist is far below the average among all the top hotspots. While the average spending per tourist was around $1,100 in the top eight, it is just $743 in Turkey. Unfortunately, this is the chronic disease of Turkey’s tourism sector

Turkey has many must-see natural and cultural beauties. Many tourists, however, choose to visit Antalya or Istanbul. Other regions have not been able to attract so many tourists, although they could. DHA photo

Tourism is one of the sectors that recovered more easily from the latest global economic crisis. Global tourism traffic shrank around 6 percent in 2008, the crisis outbreak year, but then recovered rapidly, according to the World Tourism Organization (WTO). The sector has been increasing around 4-5 percent for the last couple of years, closing 2012 with more than 1.35 billion tourists globally. Around only 450 million people were travelling per year just two decades ago.

The tourism sector’s share in global output is now around 6 percent.

The world tourism market has recently reached $1.75 trillion in volume, and a few Western countries have the lion’s share in earning the most tourism income. Many others earn smaller amounts, including Turkey. Some 53.3 percent of total tourism spending was made in developed countries in 2012, with the others taking 46.7 percent of the share. Some 52 percent of all tourism spending is made in Europe and 23 percent in Asian countries. America follows with around 16 percent.

Eight countries, which attract the most tourists, take a share of 40 percent of the world’s tourism cake. The U.S. comes first with around $126 billion of annual tourism income, with around $2,000 spent per tourist.
Spain comes first in Europe with a yearly tourism income of around $60 billion. France comes next, even though it attracts more tourists than Spain. Italy, Germany and Britain take their places in the top 10 list. Turkey ranks eighth with around $26 billion of annual tourism income. China is the leader among Asian countries, ranking fourth in the top 10 list.

Although around 35 million foreign tourists arrived in Turkey in 2012, the country earned only $26 billion of tourism income. Turkey’s tourism income per tourist is far below the average among all the top 10 countries. While the average spending per tourist was around $1,100 in the top eight, it is just $743 in Turkey. Unfortunately, this is the chronic disease of Turkey’s tourism.

In fact, the term of “tourist” should be clarified in Turkey’s national statistics from “foreign visitors,” as all of the 35 million foreign visitors to the country were not actually tourists, and didn’t spend an average of $750 in 2012. This is also the case for the expected 38 million foreign visitors in 2013 as well. These numbers include all foreign people who arrive in Turkey with their passports. Among them are Georgian construction workers who arrive in Turkey to work, for example, in the Black Sea province of Rize, or Iraqi people visiting their relatives in the eastern Anatolian province of Hakkari. It is for this reason that Turkey’s tourism income is that lower than the other mentioned countries.

This is not the only reason, however. As a lot of resort hotels were constructed in Turkey in an unplanned manner, hoteliers always need to make huge drops in their prices to be able to fill their rooms, particularly in the Mediterranean city of Antalya, through “all-inclusive” packages. 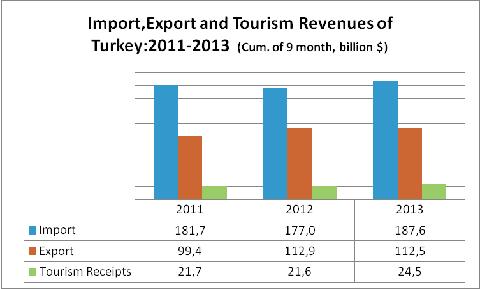 Turkey has many must-see natural and cultural beauties. A majority of tourists, however, choose to visit Antalya, the center of cheap tourism, and Istanbul. Other regions have not been able to attract so many tourists, although they could.

Turkey’s conservative government already does not like the tourism sector, but has put up with it as it needs foreign currency. As the government does not want to spread touristic activ