Despite women’s participation in labor market rises in Turkey, most of them are employed at works that require less qualifications or don’t provide social security. Also, women’s share in manager positions of the companies remains considerably

According to the Household Labor Statistics revealed by state-run statistic body TÜİK every month, the population of women over 15, able to take part in the work force, is one point above half of Turkey’s total population. However, the number of women that take part in the labor market is under one third of the total.

The number of women above the age of 15 that are excluded from labor force market rose from 18.8 million in 2005 to 19.4 million in 2013. 61 percent of those women (11.4 million) are classified as “housewife.” The number of women who participated in the work force is 8.8 million, and as 12.5 percent of them (1.1 million) are unemployed, the rest are somehow employed. It is important that female employment rose from 5.3 million in 2005 to 7.7 million in 2013. It means a 45 percent rise in eight years. But, the quality of this quantitative rise is also important as well.

In order to ease unemployment, which quickly rose due to the 2008 global economic crisis, the AKP rule promised employers that if they employed women or young workers, the state would pay an employer premium. So, the number of registered and paid female workers showed a considerable hike. There are currently 3.1 million female workers that have social security and the number tends to keep rising. Most of them work in the retail, education, health, bureau, food and beverage, ready wear and food sectors. But, 53 percent of 7.7 million female workers (4.1 million) work informally and without insurance. 2.5 million of them work in the agriculture sector as 1.6 million of them work in the non-agriculture sector in urban areas.

There is limited female labor in occupations dominated by men, which require qualitative labor and provide social security. There are also women at top and decision making positions and even they are few. According to TÜİK figures, there are 220,000 women in “law-making, high level executive and managers” professions, but they only make up 11.5 percent of the total. However, 29 percent of female workers are farmers. 20 percent of them work in elementary occupations that do not require qualifications; this shows that half of the female workers are employed in occupations that don’t require serious qualifications in agricultural and non-agricultural sectors. 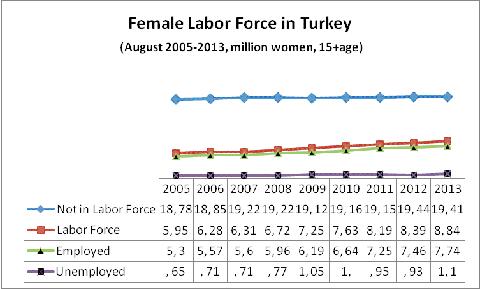 Turkey’s Sabancı University’s Corporate Management Forum has recently organized the First Turkey Women Directors Conference, in cooperation with the Swedish Consulate and Egon Zehnder International Turkey Office. A report on the rate of participation from women and men in companies’ executive boards was revealed at the conference. Research was conducted among 3002 chair persons in 427 companies, quoted in Bourse Istanbul (BİST). The report shows only 8.5 percent of board members are women. While the female director rate in supervision committees is 8.2 percent, the rate of male directors is 91.8 percent. As the rate of female directors is 7 percent in corporate management committees, the male director rate is 93 percent.

Overwiev of female-held directorships on BIST Boards in 2013 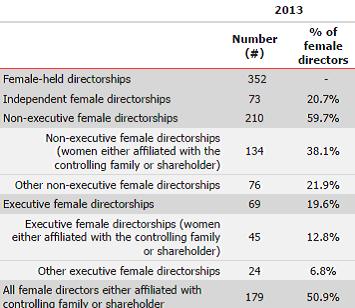 Also, another report shows that in companies listed in BIST-100, the female director rate in executive boards rose from 8.6 percent in 2008 to only 11.2 percent this year.

Only 352 seats of approximately 3000 board chairs belong to women. When regarding current tendencies, this share (11.2 percent) can rise to 25 percent in 44 years.

However, in more participative and democratic countries, the situation is much different. For instance, 36 percent of executive members in companies are women; in Norway the rate is 27 percent, in Sweden, Finland, the United States, Germany and the United Kingdom are around 13-14 percent.

It should be understood that female participation in the work force as worker, or bourgeois in a male dominated capitalism isn’t enough. It is obvious that women should fight for a more fair and humanistic labor process by demanding more participation in management.