It will take just ten years until the celebration of the 100th anniversary of the Turkish Republic, which was founded on ruins of an old empire. Every 10 years have been a turning point in Turkey’s history. Let us hope the 10th decade of the Republic is to be the years of the transition to a real democracy

Our republic was declared 90 years ago. It will take just ten years to celebrate the Turkish Republic, which was born out of the ashes of the Ottoman Empire. Every 10 years have been a turning point in Turkey’s history. I have tried to summarize what has happened in each of those 10-year periods.

1st decade-1923/1933: A new republic was founded in 1923 under the leadership of Mustafa Kemal Atatürk after the war of independence. “The Turkish state is republican, nationalist, statist, secular and revolutionary. Its official language is Turkish, and its capital city is Ankara,” said in the second article of the 1924 Constitution. The biggest deficiency of the founding body was the exclusion of Kurds in an attempt to melt Kurdish identity into being ‘Turkish.’ This has been felt for years. The Republic took very heavy economic burdens from the debt-ridden Ottoman Empire. Some 80 percent of the population relied upon agricultural activities, having lived in rural areas. The founding bodies were not able to do anything to end the country’s dependency upon foreign sources. 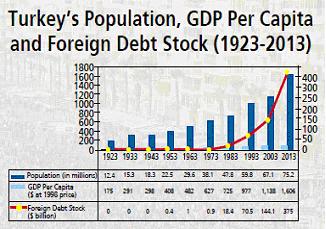 2nd decade-1933/1943: Some large steps were taken on the road to create a national identity under the single party. The country needed to close its doors abroad, economically, due to the Great Depression. The government at the time adopted a state-controlled economy, having enabled the private sector to flourish at the same time. Some kilometers-long railways were built, connecting the domestic market actors with each other by rail. This was also a must to surpass the Kurdish revolts at the time. The country developed close ties with Soviet Union, having taken financial aid. Using the aid, the government created some form of import-substituting economy based upon the use of local raw materials in production facilities. Many industries were born from cotton textiles and sugar to iron and steel. Some preparations were evidence in creating a Muslim-Turk bourgeois, supported by some reforms on alphabet and clothing, among others. At the same time, some harsh operations were held against Alevi Kurds in the eastern province of Dersim. The country tried hard to not enter into the coming world war and to prevent a civil war.

3rd decade- 1943/1953: İsmet İnönü, known as the ‘Second Man’ after Atatürk, achieved to keep the country away from WW II. Some really sad steps were taken during this period to shift capital from Non-Muslims to Muslim-Turks, such as putting heavy wealth taxes on the former group into effect.

Capitalism became the winner of WWII and the International Monetary Fund, the World Bank and the NATO appeared on the global scene. Turkey entered into a multi-party period with the establishment of the Democrat Party by Celal Bayar and Adnan Menderes, who had former members from the Republican People’s Party (CHP). They began to rule the country in 1950 by adopting such slogan: “It is enough. Now the people will speak.”

4th decade- 1953/1963: The Democrat Party made the country more attached to the world economy during its rule until the 1960s by building infrastructure projects from highways to dams with World Bank loans. The mechanization process began in the agricultural sector, pushing immigration from rural areas to big cities, making the city of Istanbul a center of attraction. Turkish business groups, like Koç and Sabancı, began to build partnerships with foreign groups. They also established new local banks.

And state-run corporations, known as ‘KİT’ in Turkish, developed more. Some polarizations, however, were unleashed among different levels of society due to some steps taken by the Democrat Party and then the conflicts became more and more heated. Turkey then saw a coup in 1960. A new era began in the country in 1961 with a new constitution defining “Turkish people who made the May 27, 1960 revolution, by using its right to resistance against a government which has lost its legitimacy with its tendencies and behaviors against both the Constitution and the laws.”

5th decade-1963/1973: Turkey met with the term of planned development under the rule of Süleyman Demirel, the new leader of the centrist right. The country adopted a mixed economic model with the combination of import-substitution policies and agricultural modernization. Some of the rural people began to move to Germany as immigrant workers, although some of them moved to Turkey’s big cities, creating unions of workers, under the framework of the Revolutionary Workers Unions Federation (DİSK). The Turkish Workers’ Party entered Parliament. Bülent Ecevit began to move up the political ladder as a new promising leftist leader. In the meantime, Demirel was removed from the political realm for a while with a military coup on March 12, 1971. The  CHP won the general elections in 1973 under the leadership of Ecevit and established a coalition government with the Nationalist Salvation Party, led by Necmettin Erbakan.

6th decade-1973/1983: With the military intervention in Cyprus, Turkey met an international issue, which would be called the “Cyprus Issue.” While some leftist movements were on the rise in Turkey, some fascist groups appeared, very integrated into the country’s national intelligence unit (MİT), under the leadership of the Nationalist Movement Party (MHP). Social polarization began to become more and more heated. Meanwhile, the country was suffering from the shrinkage in the closed economy. Demirel, who led the Justice Party (AP), nationalist MHP and Islamic MSP established coalition governments. The  IMF pushed the country to open its economy to the global markets. Turkish Industrialist and Businessmen Association (TÜSİAD) backed the IMF’s warnings. Demirel appointed Turgut Özal, supported by big corporations, as economy chief. Turkey adopted a series of radical economic decisions, called the ‘January 24 decisions’ in 1980, but some people saw the workers’ movement as a real hindrance before ‘social and economic development.’ Then the military staged a coup in Sept. 12 1980 to “end social conflicts.” The chief of the general staff at that time, Kenan Evren, backed by the United States, became the president of the country. The new administration didn’t like the leftist movements, creating the 1982 Constitution.

While Özal became the new president of the country, the politically-banned Demirel (by the coup) established a new party, the Right Path Party (DYP), and won the elections. Demirel became the new PM, and then the new president after Özal had passed away. In the meantime, the public finance crisis was growing. Deficits were common both in local and central budgets. Hot money inflow was accelerated by a dramatic change in currency system.

8th decade-1993-2003: This period was characterized by various deep state operations under the rule of Demirel’s successor, Tansu Çiller. Turkey suffered from a dramatic economic crisis in 1994. The Islamic National View movement, led by Erbakan, won the administration of large cities. RT Erdoğan was elected mayor of Istanbul. The National View became one part of the coalition government in 1996.

The army didn’t like some of the movement’s actions and the National View was pushed to resign with a post-modern coup in Feb. 28, 1997. Turkish economy became more and more fragile during a series of following centrist right and centrist left coalition governments. A huge earthquake happened in 1999 in the most industrialized region of the country. And at the same time, Öcalan was arrested, starting a new period in the Republic’s history: The move of the Kurdish politics to the island of İmralı, where Öcalan is still in jail. Then, Turkey suffered from the biggest economic crisis of its short history in 2001.

The coalition government overcame the crisis with the bitter receipts of Kemal Derviş and the IMF, but was defeated in the 2002 election, and couldn’t even enter Parliament. The Justice and Development Party (AKP) rule had thus began under the leadership of Erdoğan and Abdullah Gül.

9th decade-2003/2013: The AKP has benefited a lot from the improved economic conditions after the 2001 crisis for years. Foreign capital inflow to the country has been enormous, mainly due to the global economy’s recent dynamics. The government first put its political agenda into effect, starting the ‘Balyoz’ and ‘Ergenekon’ operations. Many steps were taken to ‘Islamize’ almost all segments of society. The party won three general elections, and two local elections. Everything has, however, started changing by spring 2013. The government has faced some problems with its relations with the U.S. and the EU, losing its some positive stance in the Middle East. Then the Gezi protests began in June 2013. The AKP image was negatively affected both inside and outside. Even more, high liquidity party in the economy is about to end.