With the formation of the Binali Yıldırım government, the foreign exchange rate and interest rates seem set to be given a new direction. The pulse of the new government, in the second half of the year, will be set by the price of the dollar. Both domestic risks and the risks in the Middle East, as well as the Fed’s stance, are determining the price of the dollar. The dollar, as a matter of fact, is the most important parameter affecting Turkey’s state of affairs.

Despite the financial and political turbulence experienced after Ahmet Davutoğlu’s resignation on May 4, why did the consumer index not fall? The answer to this question lies in the dollar exchange rate. The dollar rate, even though it fluctuated in May, did not show a mobility that would disrupt the confidence. From the end of April until May 20, the Turkish Lira fell 6.1 percent against the dollar. When we view it from the point of the dollar, it went up from 2.79 to 2.97, increasing 6.5 percent.

As well as the lira, other developing country currencies also lost 4 percent of its value against the dollar. But again, the extra loss of the lira has been 2.1 percent. Other developments occurred that prevented the swelling of the extra loss. First, local investors and depositors exchanged their foreign currency deposits for lira. They switched to the lira to take advantage of the rising rates. In the first two weeks of May, residents sold $7 billion dollars. This is the biggest sale residents have conducted in the past years. Both real persons and legal entities engaged in the selling. If these sales had not stopped the rise in the rate, then the price of the dollar, which neared 3 liras, could have easily risen to the 3.05- and 3.10-lira corridor.

The importance of the dollar

In Turkey, the dollar and its exchange rate is a barometer for the economy. The pulse of the economy can be felt by looking at the dollar. In every era when the mobility of the dollar rises, there are times when the economy shakes. There are several explanations to this: Because Turkey is a country where domestic savings are inadequate, foreign resources are of vital importance. The current account deficit is chronic. Imports are $207.2 billion and the gross domestic product is $720 billion. The rate of imports to the gross domestic product is 28.8 percent, which is high. Imported products, to a great extent, consist of energy, intermediate goods and raw materials. The exchange rate is included in all production costs. This aspect is also a determinant of the inflation rate. 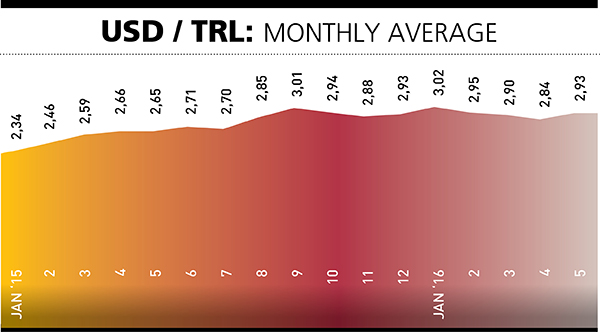 The chronic current account deficit is financed by foreign resource inflow. The outstanding external debt is over 55 percent of the national income and two thirds of it belongs to the private sector. The foreign debt of the private sector is $287 billion. The domestic loans that are foreign currency based are $150 billion. Major investments have been financed by external loans. In those years when the exchange rate increases, major industrial companies experience exchange rate losses. When the lira gains value, then their profits increase. This segment is the most sensitive to exchange rate rises.

Almost 40 percent of the total savings of residents of Turkey are foreign exchange accounts, and they are nearing $160 billion.

Because of all these reasons, the basic and preliminary indicator of the economy is the dollar rate. In the second half of the year, eyes will be on the dollar exchange rate.

It seems like the appointment of Mehmet Şimşek as deputy prime minister as desired by the markets has pushed down the risks for Turkey. However, the lifting of the immunities of deputies has strained the political environment drawing both domestic and international reactions.

Clashes in the Middle East, especially the Syria factor, are again increasing Turkey’s risks. Debates on the presidential system have the potential to increase political tension and increase risks.

As important as these are, there are also the international winds. The probability that the U.S. Central Bank Fed’s rate hike in June may result in the withdrawal of global funds from countries like Turkey. This is an important factor that could raise the dollar rate again.

After the cabinet change, the interest rate decision of the Monetary Policy Board meeting on May 24 was awaited in earnest anticipation, but the result was no different than what was expected by the markets. 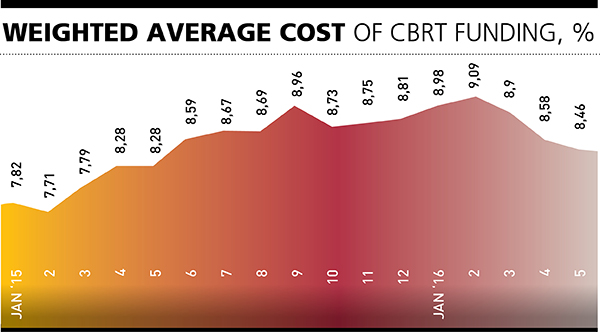 The Central Bank had kept the overnight lending rate stable at 10.75 percent for one year but had started lowering it this year in March. The lending rate was 10.50 percent in March and 10 percent in April.

Another tool in funding the markets is the weekly repo auctions. The interest rate in this funding has been at the level of 7.50 percent since February last year.

What interests everybody is the cost of funding. The funding cost which shows the average of the overnight lending and the weekly repo auction rate, based on amounts, had a fluctuating course, recently becoming 8.5. This rate was about 9.13 percent in February. In three months, it fell more than half a point. This is the rate at the crux of the matter.

The Central Bank on May 24 decreased the overnight lending rate, which is the interest ceiling, of the funding rate by half a point to 9.5 percent. It did not change the weekly repo rate. Thus the average funding cost stayed at 8.5 percent, meaning nothing changed.

Especially those who are close to the president are raising their voices that the Central Bank should have decreased interest rates more. Those who argue this say that high inflation has stopped causing trouble for Turkey. As a matter of fact, this cannot be said. Even though annual inflation appeared that it fell to 6.57 percent at the end of April, the annual rate is expected to rise in May, even if only slightly. Besides, core inflation is still hovering around 9 percent.

Thus, it is too soon to say that inflation is no longer a problem in Turkey. The Central Bank considered this and the sensitivity of the conjuncture we are experiencing but did not change rates. It is clear there is an agreement on this with Şimşek, who is still at the wheel of the team managing the economy.