The founding cadre of the Republic of Turkey was not exactly fond of foreign capital. It was believed that the role of the imperialist games was central in the collapse of the mighty Ottoman Empire. In the 1930s, they started business by removing the concessions such as in ports, telephone, gas and railroads granted to foreigners and taking over the establishments. Foreign capital legislation was quite conservative and the republican cadre was extremely shy in the usage of foreign debt from Western countries. One would not at all expect such a cadre to sell immovable property to foreigners or tolerate the sale of land, house or buildings. As a matter of fact, this strict legislation continued until the 2000s. The Justice and Development Party (AKP) government that came to power in 2002 tried frantically to prove itself to everybody, both domestically and internationally, on neoliberal matters. It absolutely did not restrain itself in privatization projects and it liberalized the relevant legislation on the sale of real estate to foreigners in 2003. Well, what happened then? Were the sales of property as high as expected?

In 2003, the year after the AKP came to power, the amount earned from sales of real estate to foreigners was below $1 billion. In the following years, and after the changes in the legislation facilitating sales, this figure went up and in 2013 it reached $3 billion sales, nearing $25 billion as a total.

When it is considered that the income obtained from privatizations during the AKP government era is $50 billion, the $25 billion entering the country through property sales to foreigners is remarkable. However, when you compare the same value to exports and tourism revenue, then the performance might not look too significant. Exports during 2003 and 2013 approached $106 billion annually. In this situation, the foreign exchange obtained through real estate sales to foreigners was 2.2 percent of that obtained through exports.

While property sales to foreigners in the form of housing, land and offices over 11 years reached $25 billion, this corresponds to 13 percent of the tourism revenue that amounts to $196 billion during the same period. During the 11 years in question, the year when the ratio of property sales was the highest against tourism revenue was 2006 with 21 percent. 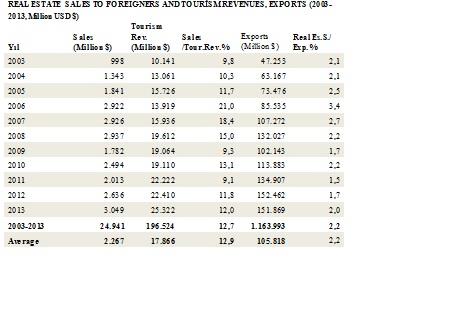 The Turkish Statistical Institute (TÜİK), in the statistics that it has started issuing since 2013 about home sales, collects sales to foreigners in a separate headline. According to this, in 2013, out of the total of 1,157,000 unit sales, 12,181 were sold to foreigners. This corresponds to little more than 1 percent of total house sales.

In January 2014, house sales were 88,000 units; out of this total, 1,207 units were sold to foreigners. In other words, the rate remained at 1 percent again. According to TÜİK data, out of the total sales of approximately 12,000 units to foreigners in 2013, more than half of them took place in Antalya. In Istanbul, 2,447 units were purchased. Other provinces and districts where foreigners bought apartments and houses were Aydın’s Kuşadası district, and the provinces of Muğla, Mersin and Bursa.

In the property owned by foreigners in the past 11 years, Antalya  (especially Alanya) has a share of around 30 percent, Muğla 14 percent, Istanbul 11 percent and Aydın (especially Kuşadası) 11 percent.
Out of the total real estate that was sold to foreigners, 51 percent was sold to Germans, 10 percent to the British and another 10 percent to Austrians. Out of the total, 5 percent belongs to the Greeks. In other words, three quarters of all sales have been made to four European country citizens.

On the other side of the medallion, constructions to meet foreign demand has caused plunder, unplanned urbanization and environmental problems, especially on our coastal strip in the south.

The unregistered management of property bought by foreigners in our coastal cities and their usage to obtain unregistered tourism revenues is another area that has been subject to criticism.