Civil aviation has become one of the fastest growing sectors during the Justice and Development Party (AKP) rule due to facilities provided for the Turkish Airlines (THY), the incentives granted for private airlines and the state’s building of new airports.

The fleet which consisted of 138 aircraft in 2003 has reached 390 aircraft in 2013 and seat capacity has increased from 27,000 to 70,000 in the same period. In parallel with this, while 9 million passengers flew on domestic routes in 2003, in 2013 this figure reached 77 million. The number of passengers flying international routes, on the other hand, went up from 25 million to 73 million in the same period. The total number of airline passengers has risen from 34 million to 150 million with a 336 percent increase. 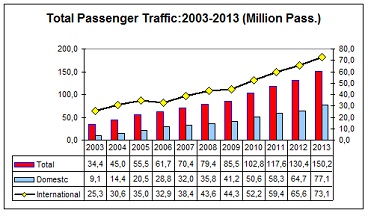 The future of civil aviation, which has demonstrated a striking advance during the AKP era, is questionable, however. Civil aviation, which received a major boost during the 2003-2013 period when foreign currency was held low, was supported by the AKP rule both with infrastructural investments and with tax incentives, moreover with anti-unionist pressures. The after-2013 situation of the sector is now a source of curiosity with foreign currency becoming more expensive. With the dollar gaining value against the Turkish Lira, the costs of purchased or leased planes as well as the imported aircraft fuel are expected to undergo significant hikes.

Price policy has been maintained “economic” with the efforts of the THY and this policy has been effective both in deepening the sector and also gaining new voters. It is now being debated whether or not this policy could be sustained in an era of realistic foreign currency rates. It is being stated that a hike in ticket prices is inevitable.

According to Turkish Statistical Institute (TÜİK) data, plane tickets increased an average of 6.1 percent annually during the 2003-2013 period, whereas the annual increase rate of consumer price index (CPI) was 8.6 percent in the same period. This means plane ticket prices have been following a course 2 points below the CPI.

It looks inevitable that plane ticket prices, which experienced their biggest hike in January 2014 with a 24 percent increase, will further increase with the climbing foreign currency rates. 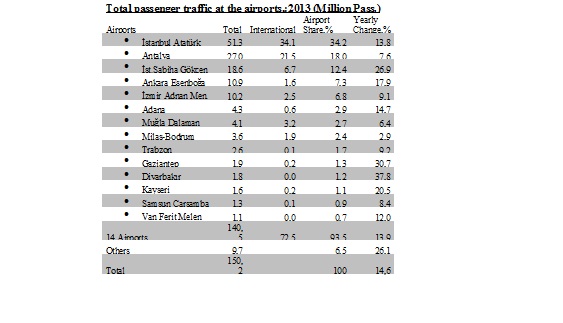 The third airport planned to be built in Istanbul’s north forests which has created major debates is also wished to be built within the framework of the same model and its cost is as big as the jaw-dropping figure of 22 billion euros. A court case opened by an environmentalist group against this airport project was acknowledged. On the other hand, expropriation works are ongoing.

Constructions of Ordu-Giresun and Hakkâri-Yüksekova Airports, which are financed by public sources, are continuing.