Since the beginning of the year, in the list of the national currencies of the fragile five, which includes Turkey, devaluating against the dollar, Turkey has separated from the group. In the period between the beginning of the year until March 6, the Indian rupee gained 1.5 percent in value against the dollar.
The South African rand lost 4.1 percent and the Indonesian rupee lost 4.5 percent in value; whereas the lira lost 11.4 percent value in the same period. The devaluation of the lira is at a level incomparable to the others. From these five countries, the nearest one to the lira, even though not equal, has become the Brazilian real.

Several domestic and international authorities have associated the high level of this blood loss to President Recep Tayyip Erdoğan’s pressure on the Central Bank to lower interest rates and the loss of confidence stemming from that. This situation has increased Turkey’s risk premium and the increased risks have carried the dollar higher.

The increased climb in Turkey’s credit default swap (CDS) in recent days has further decreased the appetite of the foreign investor, and together with outflows, the dollar is rapidly climbing against the lira. Turkey’s CDS was 185 on Jan. 16 when Erdoğan exerted pressure on the Central Bank and the dollar rate was 2.33 liras. Since then, CDS has increased, just as the exchange rate. At the beginning of the week, the risk premium was 201 and the dollar rate was 2.53 liras; at the end of the week the premium went up to 218 and dollar to 2.65 liras. 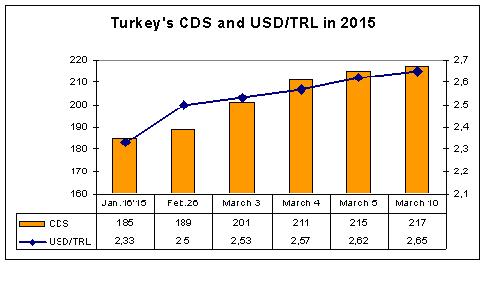 Above Turkey’s 218 risk premium, there is Brazil with 253. However, South Africa follows Turkey with 195 and Bulgaria comes next with 171. Portugal has 129 while Spain has 92.

The January current account deficit was announced as $2 billion and the capital inflow as $7.5 billion. However, the month of January does not reflect the following months of February and March. The climate has rapidly changed. The current account deficit may still be low because of the fall in industry in the following months and the fall in the industrial imports but in February and March, it was observed that capital inflow rapidly declined. The outflows of capital also pushed the dollar up.

Because of the expectation of the Fed meeting and the fear of a signal of increasing interest rates in this meeting, while the Dollar Index has gone up to 98.50, in such an environment, it looks difficult for the Central Bank alone to stop the climb of the dollar with the decisions it has made one after the other.

For the dollar/lira to normalize and for the Bank’s moves to be effective, first of all, there absolutely has to be a break in the dollarization that develops in association with the rapid increase of the Dollar Index experienced globally.

Nonetheless, it is important in terms of “inner peace” that the information flow concerning the Central Bank to normalize fully and an entire harmony between the Bank and the government should be displayed for the markets. In this context, we would not know how effective it will be to use the meeting between President Erdoğan and Deputy Prime Minister Ali Babacan and Central Bank Governor Erdem Başçı to curb the tension; however international winds especially look as if they will highly marginalize this kind of image build-up effort.

It is very difficult for the Central Bank in its next scheduled meeting on March 17 to start a new action and make the interest rate cut that Erdoğan and his aides are hoping for, due to the current situation of the dollar/lira and uncertainties about the Fed meeting. Unless there is a positive improvement in the current domestic and international circumstances, it looks more probable that the Central Bank will have a “wait and see” policy.

If the dollar/lira rate stands at the 2.65 step, then the 2.68-2.70 band will stand out on an important psychological level. From there to move on to 2.80 will depend on news coming from the Fed.

The storm of dollarization is keeping many sleepless, especially the ones that have external debts totaling $400 billion. Two-thirds of this debt stock belongs to the private sector. Moreover, 40 percent of this amount has to be paid in 12 months. Any climb in the dollar means the loss of liras at the exchange rate. 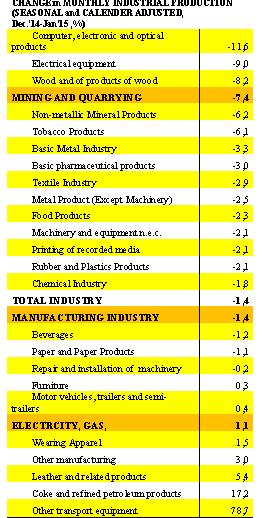 It is no secret that this situation turns the balance sheets of debtor firms upside down and negatively affects all investment decisions. Especially in the industry sector, the shrinkage that results from the shrinking of the domestic market and exports has begun to be seen in the figures.

The Turkish Statistical Institute’s (TÜİK) January data released on March 9 about industry production has shown that we have entered an important decline phase in industry. When seasonally adjusted, the January industry production fell 1.4 percent compared to December 2014.

When the decline in production is listed from the most to the least, in computer, electronic and optical products, electrical equipment, the decline varied between 9 percent and 12 percent. The sharp climb in the dollar exchange rate is considered as influential on this production shrinkage.

It was also noteworthy that “mineral products” such as glass, ceramics, bricks and cement that are inputs for construction have declined 6.2 percent in production in one month. In particular, the decline in cement exports to Iraq has caused capacity drops in this sector. The fall in house sales and the stagnation in mortgaged sales because of high interest rates have also brought a decline in house production and the construction material industry.

The 6 percent production drop in cigarette production is again noteworthy. The drops in base metals, mostly iron-steel, and medicine, textile and food production are considered to be related to the fall in domestic demand and partially to the drop in exports. The manufacturing industry declined 1.4 percent in general in January.

The fear of losing one’s job

It is stated that the decline in industry production may continue in the coming months. This will be related to the stagnant course of domestic demand due to the increasing dollar exchange rate and non-declining interest rates. This negativity is accompanied by the devaluation of the euro against the dollar as well as the decline in exports.

The decreasing domestic and external demand is shrinking capacities in many workplaces and it is said that starting from this month, workplaces will begin taking precautions on employment. It is being reminded that originating from industry centers such as Kocaeli, Bursa and Tekirdağ, an employment shrinkage beginning with unpaid leave may be in question, just like the 2009 conjuncture.

In 2009, the exchange rate had a sharp climb with the effect of the global crisis and as a result of the shrinkage in domestic demand unemployment climbed to 15 percent.

It is also mentioned that especially in places where a union is not present, the crisis would be attempted to be overcome over the employees; also in workplaces where unions are active there could be some measures taken in agreement with the unions.

The unemployment risk stemming from the production drop in industry will also be felt in some branches of the service sector.