It is considered an indication of the new crisis in Russia that the devaluation of the Russian ruble against the American dollar reached 23 percent between Sept. 1 and Nov. 11. 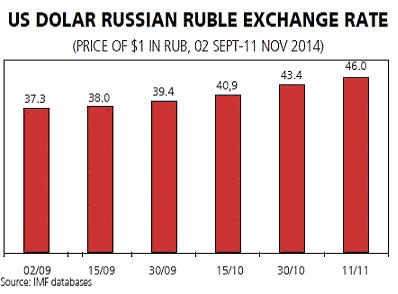 The dollar, which was 37.3 rubles on Sept. 1, gained value to reach 39.5 rubles by the end of the month. In October the dollar rose 10 percent more, hitting 46 rubles by Nov. 11. The dollar, which went up 23 percent in just 70 days, is driving the Russian economy into a corner.

In a statement the other week, the Russian Central Bank admitted that the Russian economy may face the reality of “zero growth” in 2015.

According to the Russian Central Bank, in the event that the sanctions against Russia continue and the average price of oil remains $95, then in the year 2015, the Russian economy will have zero growth.

The outflow of capital has been influential in the meltdown of the ruble against the dollar. Both the foreign capital that had entered the country and Russian capital continue to escape. It is reported that net capital exit from Russia, which is going through instability because of the impact of economic and financial sanctions against it and the sharp drop in oil prices, has reached $128 billion in nine months.

The acceleration of the net capital outflow that totaled $61 billion over all of 2013 has caused the Russian currency ruble to devaluate rapidly. The decrease in oil prices also contributed to this process and the Russian Central Bank had to increase interest rates four times to curb the drop in the ruble. At the same time, the indicative interest rate has been increased from 5.5 to 9.5 percent. As a result of all these developments, the Russian economy has been halted in its tracks.

Russia, which entered a recession in 2009 because of the global crisis, is now facing the threat of a new recession as the fruit of the foreign policy of President Vladimir Putin, who is ruling the country in a one-man regime.

In the process that started with the annexation of Crimea and continued with military operations resulting in the de facto split of Ukraine, Putin’s support in Russia climbed but his vulgar display of power took the Russian economy to the point of standstill.

Russia had an economy which was based on oil and other energy resources to a great extent but it is a country that benefits from international capital movements to turn the wheels of its economy.

With harsh fluctuations in politics and with sanctions, foreign capital lost its appetite and departed. The Russian rich accompanied this escape. With the anti-American and anti-Western discourse he resorts to frequently recently, Putin is trying to maintain his popularity in Russia. What he will do now is a topic of curiosity and concern.

The impact of Russia’s crisis on Turkey has started to decrease Turkey’s exports and hit its tourism. Moreover, in the eyes of the international investor, Russia and Turkey are in the same region and have similar geopolitical risks. They believe that, for this reason, distance should be kept. This has become a new rationalization for the loss of the appetite of the capital owner and it will affect Turkey negatively. 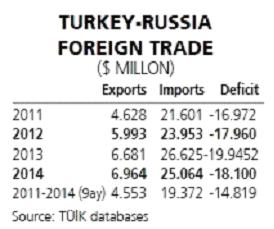 Russia is a net exporter to Turkey; it earns a lot of foreign currency from Turkey, reaching $17 billion to $18 billion annually. Turkey needs to sell more goods to narrow this difference, but it looks as if the crisis will make this very difficult.

While exports to Russia between January and September 2013 were $5.1 billion, in the same period in 2014, they went back to $4.5 billion. This year, because of the excessive devaluation of the ruble against the dollar, it is impossible to reach the same level of last year’s total exports to Russia, which were worth $6.9 billion.

The highest number of tourists comes from Germany and Russia to Turkey. The numbers have been rapidly increasing in recent years. In the period between January and September 2012, around 3.3 million Russian tourists came to Turkey; this figure went up 4.1 million in the same period in 2014, nearing 14 percent of the total of 30 million incoming tourists.

Russia is a hopeful market for Turkey. The increase in the number of incoming tourists was 17 percent last year. This year even if this went down to 9 percent, the increasing trend is continuing. Turkey is likely to be affected negatively pretty much by the shrinkage of this market. However, it looks quite possible that Russia will cut down on its tourism expenditures because of the extreme valuation of the dollar – something that will negatively affect Turkey’s tourism.

Another negative effect the Russian crisis will have on Turkey stems from the fact that they are in the same region.

The accelerated loss of reputation because of the geopolitical risks Russia has taken primarily affect capital inflow negatively, and rapid outflows have torn down the ruble. Turkey, in the eyes of foreign investors, is regarded as a country in the same region as Russia. And when the geopolitical risks Turkey has taken in the Middle East are taken into consideration, Turkey is perceived as a country with increasing risks in terms of capital investment.

This is an important factor that may cause a decrease in the capital inflow that Turkey desperately needs.