Some holding groups, which have particular influence on the country’s economy, have been leaping forward in the electricity business and have seized the best assets. The state has been speeding away from the energy sector, in which it has been transferring its assets to the private sector through privatizations. In addition to the handover of public power plants and power distribution grids, it has been avoiding to take an active role in new investments, encouraging private sector and distributing licenses.

At the moment, some holding groups, which have particular influence on the country’s economy, have been leaping forward in the electricity business and have seized the best assets. Let’s first look at the allocation in the distribution market, which consists of 18 regional grids. 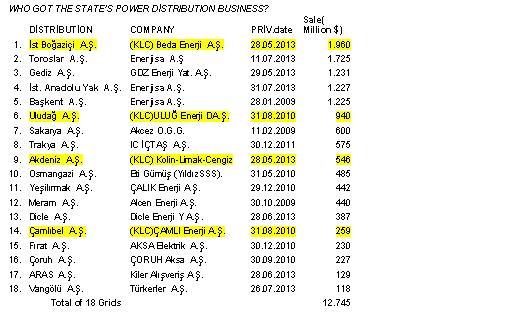 “Some names” stand out among the ones that have entered the energy business. The Kolin-Limak-Cengiz consortium, which recently bought some of Çukurova Group’s media assets from the state deposit fund TMSF, has dominated four large regions that conduct power sales to almost 10 million subscribers. The consortium won the tender for the largest of those grids, BEDAŞ, which is the grid serving the European side of Istanbul, for $2 million in May and won the Akdeniz Elektrik power grid in the same month for $550 million. In 2010, the group put down $1 billion for Uludağ Elektrik, the power distributor of Bursa and its environs. Also a company founded by this group, Çamlı Enerji, acquired the operational rights to the electricity distribution for the Central Anatolian provinces of Sivas, Tokat and Yozgat in return for $260 million. The new media group seems like it has taken a hold on four regions for $4 billion.

We see that one-third of the total sale amount of $13 billion for 18 grids have been received by the Limak-Kolin-Cengiz trio, while another one-third share is held by the Sabancı group. Within the remaining one-third, there are some business groups close to the current government like Çalık or Kiler.Those that couldn’t get in on the action of the electricity distribution business were given natural gas distribution businesses. The government gave Başkent Doğalgaz, the natural gas distributor in Ankara, away for $1.162 billion to Torunlar Gıda, a company that carries out many giant construction projects in Istanbul.

Who is in charge of production?

According to data from the Istanbul Chamber of Industry’s (İSO) latest top 500 companies list, 12 power-generation companies reached 15.3 billion liras of annual sales in 2012, although the state-run EÜAŞ and Soma Elektrik had 50 percent of the total turnover of all of those companies. The remaining 50 percent was held by the power generation companies of a number of Turkey’s conglomerates. 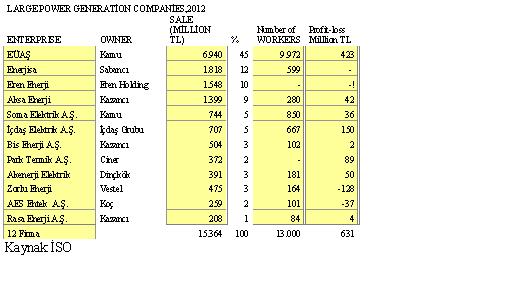 Enerjisa is the biggest private power generation company. Its parenting company had focused on mostly textile, plastic, chemicals, cements and banking until the beginning of the 1980s, but the conglomerate has recently decided to specialize in the energy sector. Enerjisa took 12 percent of the total power generation in 2012 by reaching 1.8 billion liras of 12 companies’ annual turnover, as well as winning the power distribution tenders for three big regions. Another strong company here is Eren Holding, which established a power plant in the Black Sea district of Çatalağzı. Eren Holding was originally founded to run in the textile sector, then extended the operations into many other industries.

Kazancı Holding, which is also very active in the distribution of gas and the production of generators, has been generating electricity under the name of two companies, Aksa and Rasa. The group reached around 1.4 billion liras of revenue in 2012 with its licenses for more than 10 facilities. Kazancı Holding has connections with Bis, which is based in the northwestern province of Bursa. Ciner Holding, which also owns the Habertürk media group, is another big player in the industry.

The Koç Group is hanging around by bringing on the foreign AES for its electricity generation firm Entek.

Electricity whets appetite but it is also risky, as evidenced by recent events. The power distributor for Eskişehir and its environs, Osmangazi Elektrik Dağıtım, was seized when it failed to resolve its financial issues.

Turkey’s energy watchdog, the EPDK, seized the company management on the grounds that it had been failing to fulfill its duties or pay its 180 million-Turkish Lira debt to TEDAŞ, the main electricity grid operator. The enterprise, which was privatized in 2010, dropped by the wayside within two years.

Who were the buyers? Yıldızlar SSS, which bought Eti Gümüş from Etibank in 2004. It had entered the ceramics business in the Central Anatolian province of Çorum.
Specialists say the energy business is not for those ignorant about the sector. Nobody listened to them then.What if further setbacks come?
The criticisms go like this: “A lot of companies irrelevant to these sectors won tenders. Most importantly, the tender bids were received in dollars, but consumers pay in Turkish Liras for electricity, and a serious currency gap occurs.”