Interest rate revenues are at the forefront of foreigners’ earnings, as 52 percent, or $63 billion of Turkey’s investment income has been transferred as interest revenue for the last 10-and-a-half years of Justice and Development Party (AKP) rule

It was very noteworthy that one-third of the $7.5 billion of Turkey’s current account deficit in May resulted from foreign investors’ transfer of investment revenues. Many foreign investors transferred their revenues from yields, interest and hot money very rapidly, and the total from such transfers amounted to $7 billion in the first five months of this year. If the same trend continues in the next seven months, Turkey will experience what happened in 2008. Namely, foreign investors will transfer over $15 billion of their income in 2013, as they did in 2008, when the world saw an outbreak of serious economic crisis. Such a trend was normal in 2008, but is it possible to understand the same trend in 2013? The decision of the U.S. Federal Reserve (FED) to end the high liquidity party in the global markets appears to be a prominent factor. 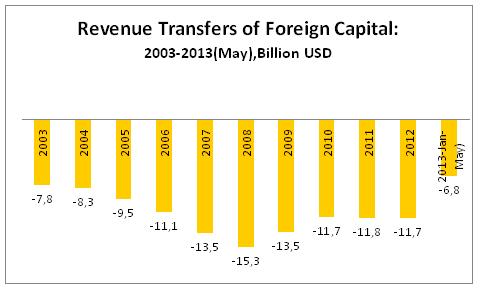 The Turkish economy has grown with high amounts of foreign money for the last 10-and-a-half years. Over 10 times the amount of foreign money flowed into Turkey over the last decade than did between 1980 and 2000. Foreign direct investment has flowed to take part in many privatization tenders and to acquire banks over the last decade. The national stock exchange and treasury bonds have attracted hot money, but mainly in the form of foreign loans. Thus, $421 billion of foreign capital has flowed into the country over the last 10-and-a-half years. To be sure, foreign investors generate a significant amount of yields and interest income from this money, and they transfer some of the earned amount time to time. It appears that a total of $121 billion of foreign revenue has been transferred under the umbrella of investment revenue in the country’s balance of payments over the 10.5 years of the AKP government.

$63 billion, or 52 percent of Turkey’s investment income of $121 billion, has been transferred as interest revenue over the last 10-and-a-half years. Some foreigners invest in company stocks, some in treasury bonds. It can thus be said that the share of interest income increases to around 60 percent when the income from company stocks and government bonds is added.

The largest part of the interest revenues are acquired by foreign loan providers to the private sector in Turkey. A majority of the foreign loans are used to finance imports, to acquire public assets and public enterprises, and to make construction and real estate investments by the public sector.

The lowest share in the foreign investors’ revenue transfers was owned by foreign direct investment revenues at 18 percent. Turkey wants to attract more FDI, as all developing countries do. However, the share of the FDI has not been able to exceed 20 percent of all foreign capital inflow into Turkey. Foreigners prefer to acquire existing companies rather than create new companies. They prefer to acquire banks and large-scale state economic enterprises through privatization tenders, and/or take up the stocks of some of the most profitable industrial and service companies. They then transfer the revenues from these activities to their parent companies. Some of the revenue could have been acquired from patents, licenses and know-how transfers.

Around 30 percent of foreign investors’ revenues in Turkey consist of stock market gains. Over 70 percent of the investment portfolio in the Istanbul Stock Market is owned by foreigners, although the share could go up or down. Foreigners may prefer investing in the stocks of the companies already listed in the stock market and/or buy and sell the government bonds. Some of their portfolio revenues come from interests, while others come from the buying and selling of stocks and bonds. 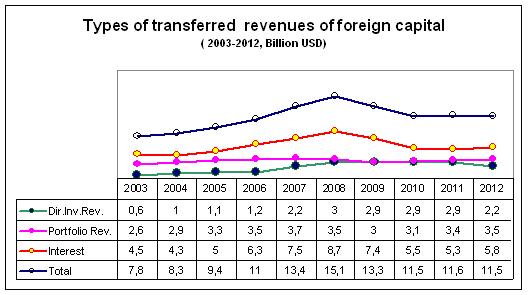 In addition to yields, interest, and stock market revenues, foreigners also transfer wage income,
although the actual share of wage income is small. Around $1 billon in wage income was  transferred from 2005 up to the sixth month of 2013. These are composed of the transfers of the wages of the C-levels of companies, consulting fees, and the revenues of foreign footballers.