With three weeks to go until the June 7 general elections, a battle of words among the political parties participating in the elections is growing between the ruling Justice and Development Party (AKP) and the opposition parties. The main theme is predominantly living costs and the economy.

An improvement in income distribution and pledges to increase social protection, which the main opposition Republican People’s Party (CHP) highlighted in its election manifesto, have been criticized at every opportunity by the ruling AKP and especially President Recep Tayyip Erdoğan.

Erdoğan, who has joined the election atmosphere not as an impartial president but as if he was the leader of the AKP, is violating election law with his stance. The opposition is filing objections to the Supreme Election Board (YSK) but the president does not seem to care.

In his speeches, Erdoğan says he was surprised at the minimum wage promises put forward by the opposition parties – the CHP has promised a minimum wage of 1,500 Turkish Liras, while the Peoples’ Democratic Party (HDP) has said 1,800 liras and the Nationalist Movement Party (MHP) said 1,400 liras. Erdoğan said, “Believe me, I am appalled. The minimum wage is as if it is auctioned. One says 1,800, the other 1,500. They do not know of the minimum wage. The minimum wage is 1,000 now. The employer cannot pay below 1,000 liras. The state guarantees that they are not paid below [this amount]. This is a guarantee. If the employer is giving more, then he can do so…”

Well, actually, it does not happen by saying “let him pay more,” because not much of a salary is being paid over the minimum wage. Wage data shows that the minimum wage is near to becoming the average wage in Turkey. 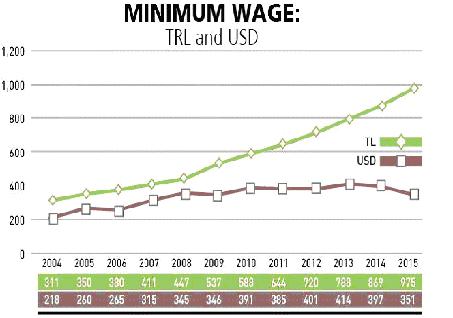 The share of those earning minimum wage or below in the economy in general is 35 percent, while in the industry, construction and service sectors this rate is 38.2 percent, 41.3 percent and 30.2 percent, respectively. In the agriculture sector this share goes up to 72 percent. In the industry and service sectors there are sub branches where this rate goes up to over 50 percent. The lowest paying subsectors are in the service sector, covering personal care areas such as hair dressing and dry cleaning; others are food and beverages services and commerce. In the industry sector, the subsectors that hire the most minimum wage earners are food, clothes, furniture, metal products production and textiles.

Whenever minimum wage is debated, those millions of people without an income who cannot access the minimum wage and who cannot earn even that much should be remembered. Millions lack a job earning them 1,000 liras a month. Roughly, the population above 15 years old is 57 million; only 25.5 million of them have an income-generating job.

The official unemployed number is three million, but we can talk about at least three million more that are not included in the statistics. In other words, a population of six million needs a job, even if it pays the minimum.

Besides this mass of millions, not every wage earner gets the minimum pay. According to the Turkish Statistical Institute (TÜİK), more than two million people work unregistered, not earning the official minimum wage.

Thus, before talking about the minimum wage, the millions who cannot find a job at this level or while working cannot even receive the minimum of what they deserve should be remembered. 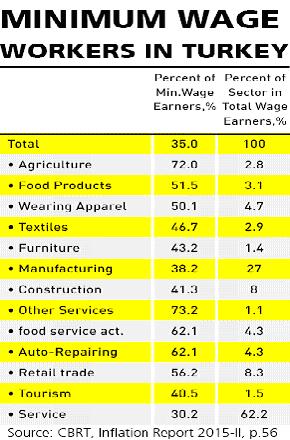 The fact that minimum wage and below earners constitute 35 percent of the 17 million workers should not give the impression that the rest are working with much higher wages. The minimum wage will be 1,000 liras net in July. With the current foreign exchange rate, this equals 330 euros or $370. Those who earn more can only earn one-fourth more than the minimum wage, around 1,200 to 1,500 liras.

Why is that so? The reply is not so difficult. Some 17 million wage earners, who constitute 68 percent of the total employment force, are not organized and not covered by unions, despite their numerical superiority.

Unemployment, which is officially 10 percent and in reality is 18 percent, is enough to “tame” the wage earners. With this fear in mind, they dare to become a member of a union, thus taking the risk of being laid off. The threat of a giant spare workforce of six million, not to mention the nine million potential female works who stay at home and act as housewives, is in question. In this case, it is not difficult for employers to hire unqualified workers and pay them minimum wage or lower, especially in certain sectors and in certain less developed provinces.

According to the European Statistics Office, Turkey is at the bottom of the Mediterranean members in terms of minimum wage and at the top among eastern European members.

Luxembourg has a minimum wage of 1,923 euros gross, followed by Belgium, Holland and Germany. Turkey’s gross minimum wage is close to Poland but higher than Hungary, the Czech Republic and other Balkan countries.

These are gross wages and cuts vary from country to country. For example, almost half of the minimum wage in Turkey goes back to the state as insurance premiums and taxes. 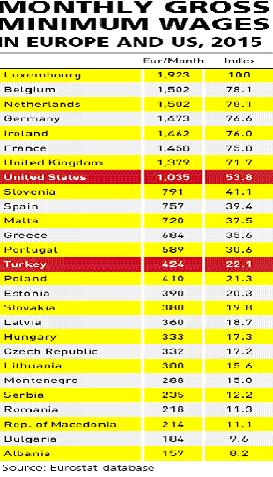 As of July 1, a single, childless minimum wage earner will get 1,000 liras net. According to the Labor Law, weekly working hours total 45 hours. In a six-day week, monthly work should not exceed 225 hours. This means the new minimum wage is $4.44 liras an hour. This is not even 1.5 euros; it is only a $1.64 an hour.

As the dollar and the euro strengthen against the lira, the cost of minimum wage for foreign investors decreases. This may be an encouraging factor for investors, but mostly for labor-intensive sectors. Also, to make direct investment decisions, investors seek many more factors other than cheap labor. In this sense, lower cost labor is not an immediate incentive factor to attract investors.

Back to the minimum wage as an election pledge; if minimum wage has become almost the average wage of society and if, in the short run, despite their numerical superiority, workers cannot get organized and use their constitutional rights of collective bargaining and striking, one way for them to have a better share of income distribution is to have the highest possible minimum wage. Opposition parties promise this to the workers and get attention, especially the CHP.

Looking from the point of the working class, if they cannot form their unions and raise their wages, then here they have the opportunity to raise the general level of wages by using their right to choose. There may be many wage earners who would opt to try this option and vote for the parties that pledge to raise their wages.

The AKP, which has built its election manifesto on “mega projects” and its propaganda strategy on what it has done in the past, has neglected income politics, primarily the minimum wage and the field of social protection. This does not make the AKP look any nicer in the eye of the voter, especially when the CHP’s pledges for two bonuses for retirees and low-priced diesel fuel for farmers are remembered…

Related Posts
Construction forges ahead in debt, industry left behind
Mustafa Sönmez - Hürriyet Daily News, /Nov.24.2014 The Central Bank announced last week that, as…
Turkey’s taxpayers in dark over bill of big investment projects (Al Monitor, December 9, 2019)
The public-private partnership (PPP) model has become a prominent form of public investment in Turkey…
Employment in Turkey ahead of growth: Is this a new wave of unemployment?
Mustafa Sönmez - Hürriyet Daily News  July/20/2015 Unemployment has started climbing again after the…