Turkish Statistical Institute (TÜİK), each month announces the returns for investments; the yields are calculated net of inflation and are shown as net profits or losses.

Among those who decide on different investment options to protect their savings against inflation, in the past one year, those who have invested in the dollar seem to have made the most profit. As of June, dollar investors look as if they have profited 27 percent. This figure, even when the 7.2 percent inflation is deduced, corresponds to a 19 percent return. 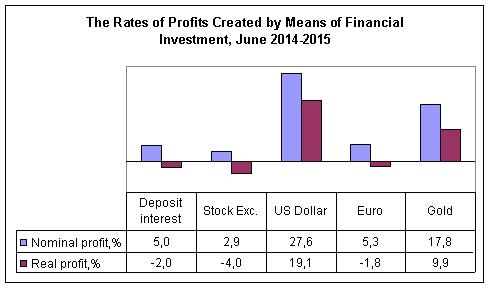 What about Istanbul profits?

While TÜİK is monitoring the returns of financial investments, it excludes house prices. As a matter of fact, those who have adequate savings to buy a house, investing in real estate is also an option. When annual return is considered, real profits of especially Istanbul and certain Anatolian provinces are above the dollar.

The Central Bank, for a couple of years, has been indexing the increase in house prices. As of the end of April, the annual increase is 18.5 percent for Turkey’s average. This is 11 points above consumer prices index (CPI). Imagine, while the price of everything has increased 7 percent, the price in housing has increased almost 19 percent. 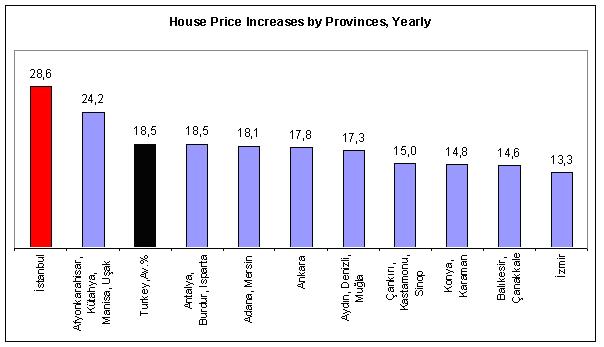 House price increases in Istanbul are especially jaw-dropping. According to the Central Bank, house price increases in Istanbul reached almost 29 percent annually. Can you believe that while the CPI increase is 7 percent, house prices in Istanbul are increasing 29 percent? You could buy a house in 2014 and sell it 12 months later with a 30 percent profit. It was only the dollar that brought the closest yield, though this investment has some risks. This profit figure explains why one fifth of house sales occurred in Istanbul.

However, this premium is not the same in other big cities. The annual house price increase remained at 13 percent in the Aegean city of İzmir, where 6 percent of sales are made. Ankara has 12 percent share in house sales and annual price increase is 18 percent.

On the other hand, house price increases in the axis of Adana-Mersin and tourism capital of  Antalya are around 18-19 percent. In the Afyon-Manisa-Uşak sub-regions though, house prices exceed 24 percent while in another tourism region, at Muğla-Aydın-Denizli sub-region, the increase is 17 percent.

Also, rental income is another important attractive factor for investments in property, especially in big cities and particularly in Istanbul. The inadequacy of student accommodation increases the demand for rental property; there are also foreign students who stay in Istanbul for short term. In other cities, there are student demands and working lower-middle class demands that nurture the investments. Monthly rental income is always higher than deposit rate. Those who have enough savings for a 2+1 unit, turn to buying houses from depositing in a bank without hesitation.

Also with the attraction of the profits in housing investments, house sales have accelerated recently. In the first six months of this year compared to 2014, house sales generally increased 21 percent, to 634,000 units. An increase of 21 percent is a good performance by itself. In an environment when domestic consumption has shrunk so much, the figure 21 percent can be regarded astounding.

Well, what happened so that house sales increased so much? Were loans better? No, mortgages are no better than 2014. The CPI is 7 percent and house loans are around 12 percent, but, nevertheless, as of June, house loan stocks have increased 20 percent in the past 12 months to reach 138 billion Turkish Liras. House loans have played an important role in total sales.

The share of mortgaged sales in total house sales as of June is 38 percent. This share was 31 percent 12 months ago. Those who are using house loans may also be loaning to purchase their unit to live in them or they may be investing; we cannot know for certain.

Well, will the increase in house prices continue? For the moment, it is continuing. The magic of Istanbul’s profits have not ceased. The most influential factor is the economic uncertainty. Real estate is regarded as a strong investment against uncertainties.

The cultural norm of “everybody has to own a house to live in” is also influential in house sales. Even if a young couple is not able to, the parents chip in and make them buy a house; thus, the demand never finishes. Even though there are seasonal bottlenecks, the market goes back to its normal intensity.

Besides the dollar and house purchases, the situation of yields of other investment fields are as follows: Despite the recommendations of government officials and the Central Bank, those who kept their money as bank deposits in the liras had huge losses and their money was not protected against inflation.

In the past year, lira bank accounts have yielded 5 percent but with the inflation of 7.2 percent, the lira savings lost 2 percent in purchasing power.

Those who were able to protect their money against the inflation were those who bought government securities and those who invested in gold. Those investing in the stock exchange and euro have lost.

Government securities investors gained 8 percent in the past one year but with inflation cancelling its 7 percent, their yield was 1 percent.

On the other hand, gold investors were the winners after dollar investors. Gold investors won 18 percent in one year and after inflation is deducted, they had 10 percent net real income.

Those investing in euro lost. In one year, they won 5.3 percent, but inflation, their loss neared 2 percent.

The stock exchange index increased 3 percent in one year but with inflation calculated, the decrease is 4 percent. Bourse investors lost 4 percent annually.